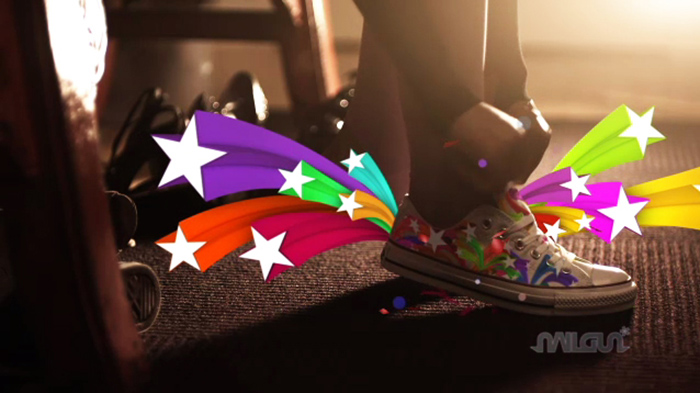 nailgun* Steps Out In Converse Style

How does a company showcase to the world how much they are capable of creatively? They can wait for the perfect job to come to them, or in the case of design/production studio nailgun, you can bring your own ideas to life – such as with their spec spot for Converse, which deeply taps into the company wide spectrum of creativity services.

“We invested a lot of time and money on this because we felt we needed to show the broadcast and advertising community, who primarily know us for our design and motion graphics work, just how versatile we are,” Michael Waldron, nailgun* Co-Founder/Creative Director. “We wanted to showcase our character-based animation work and how seamlessly we can meld it with our design and live action capabilities. Converse seemed like a natural to work with for this because, it is one of those brands that people love to personalize and make their own.”

The one minute and thirteen second spot opens on a young and trendy downtown, New Yorker as she rises and goes about getting ready to venture out for the day. The languid soundtrack coaxes the viewer through the early stirrings of her morning, gathering momentum with each stage of getting ready. A cool, pensive beat steers the mood up a notch as she shuffles from one outfit to another searching for just the right match to suit her mood of the day. Is she flirty? Is she cool and focused? Or perhaps she’s feeling like a DJ? While every outfit is delightful, she’s missing that one thing that really expresses her originality and fits her state of mind.

The pair of Converse she reaches for makes everything click into place: it’s the icing on the cake that unlocks an enchanting world bursting with colors and whimsical characters.

As she slips them on, a myriad of colors and shapes spill forth and we’re teased with a soundtrack that hints of magic and wonder. Walking through the building we glimpse a continuation of the magical world come to life, pieces floating on the air, playful characters dancing and whirling around her as she sashays out to meet the day.

Headphones on, she walks through busy New York streets, yet this practical world is now transformed to a magical playground alive with colorful characters and dancing colors calling out “Let’s Play!’ Characters peep coyly around buildings, pop out of the ground, float in the air and bounce down steps making the world around her come alive as all things ordinary take a back seat.

This is a world of fun. This is the world of Converse.

The spot ends on the waterfront of Battery Park where she meets her boyfriend, who is also wearing Converse and surrounded by the playful world. Their animated auras collide as they embrace and the spot concludes with the camera panning skyward revealing a swirl animation surrounding them like a ticker-tape parade and the Converse logo.

Japanese Animation Influence
“The characters are inspired by Japanese animation styles and each have their own subtle personality — one is frenetic, one is kind of spacey, another is a big guy who lumbers around keeping an eye on things,” Waldron says. “The textures and colors of the characters change from scene to scene because, we had each of our designers handle their specific scenes. The characters were set in terms of their personality, but we wanted our designers to experiment and create individual looks for their own scenes.”

Seamlessly blending all of this animation with the live action fell primarily onto the shoulders of Erik van der Wilden, nailgun* Co-Founder/Director of Production.

“In a piece like this, it’s not just about the rotoscoping, there were many levels of compositing that we were striving for, and that we had to keep track of, in order to make everything find it’s place in each scene,” van der Wilden explains. “Big picture wise, this was a great opportunity for us to see the kind of resources we need to handle a project like this.”

Shooting with the RED camera allowed nailgun* to capture more pixels, which served them well when it came down to fine-tuning the details.

“Choreographing the 3D into the composite wasn’t super complicated,” said Dae Hyuk Park, nailgun*’s Senior Designer/Animator. “The tricky part was making the colors pop while looking natural and integrated, as well as balancing the lighting to match the consistency through out the spot. For the 3D we had to do a ton of lighting tests in order to get the reflections on the passing cars and building windows just right.”