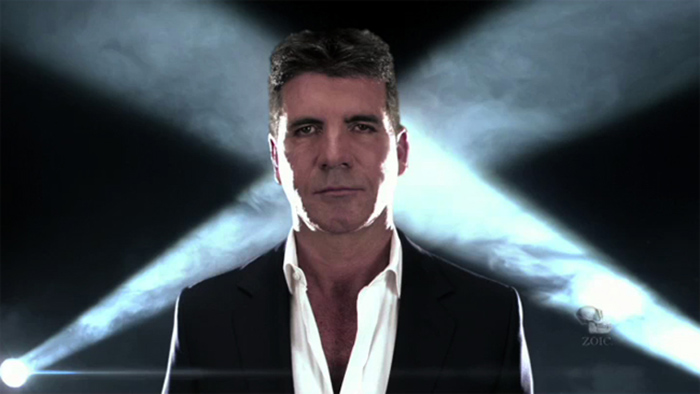 Fox’s new show The X Factor had a dramatic introduction during the Super Bowl as thousands of Xs came together to form the show host Simon Cowell. The reverse explosion of Cowell was produced by Fox, Three (One) O, Park Village Productions in collaboration with effects powerhouse Zoic Studios.

To create the effect, a variety of plaster forms simulating Simon Cowell legs, torso and head were detonated at high speed (1000-1500 fps) and shot on the Zoic Studios Stage.

A week later on a London sound stage, high-speed principal photography captured multiple angles of Simon Cowell, both static and spinning on a turntable, against an all-black environment with heavy backlight.

Additionally, Simon Cowell was 3D scanned to provide high-resolution textures for the eventual 3D model of his full body. Autodesk Maya was then used to fracture and explode the 3D model.

The compositing challenge was to integrate all the live-action elements from the explosion shoot, principal photography, and CG passes of Simon fracturing shell, individual body parts, and various ‘X’ shapes, to create the illusion of Simon being formed from the ground up. The results were premiered during the Super Bowl and online via social media.