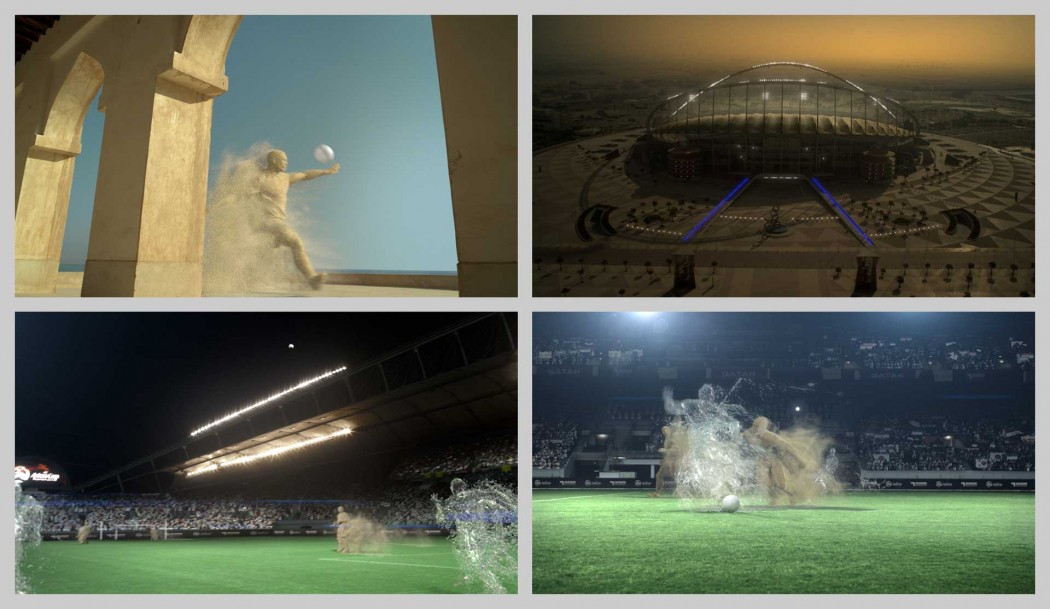 METAphrenie Plays VFX Both Sides For Asian Cup And TEDx

In METAphrenie latest promo for the AFC 2011 Asian Cup two fully CG soccer teams do battle in some of Qatar most iconic locations. The sand and water characters take part in an epic match spanning from Sealine, to Losail Village, and finally to a showdown in Khalifa Stadium

Andrea Dionisio, founder and creative director of METAphrenie, explains how Sandman vs. Waterman came into being. ‘Our brief was to create a promo based on the two greatest influences on Qatar heritage ?‚àö√ë‚àö¬® the desert and the sea.

The sand and water characters represent the fishermen and Bedouins that came together to build the city of Doha as we know it today. Working with the great team at Filmworks Dubai, we shot 8 locations over 4 days at Sealine and in and around Doha. All of the editing, visual effects, compositing and CG were done by our in-house team.’

Dionisio continued, ‘It was a challenge to deliver the spot under a very tight deadline. But, our previous experience with motion capture and particle simulation, together with a lot of late nights, ensured we met the deadline and produced a spot that everyone involved is very proud of.’

In addition, METAphenie joined forces with TEDxDubai to create the opening title sequence and a series of teasers for the local TEDx event, this year themed Reboot. Under the patronage of Sheikh Majid Bin Mohammed Bin Rashid Al Maktoum and curators Giorgio Ungania and Natascia Radice, this year marked the second annual TEDxDubai event.

Dionisio explained, ‘The TEDxDubai organizers gave us free rein to create something original for them. We wanted the titles to tell a story and convey the theme of Reboot. In technology, a reboot means a fresh start. In life, it gives us the opportunity to embrace failure and begin anew. It was important for the title sequence to represent all of Dubai ?‚àö√ë‚àö¬® not just the contemporary architecture that usually comes to mind. We focused on the windows of buildings with the idea of them being facades. One can choose to draw the curtains and portray a certain appearance, or keep them open for the world to see what actually happening inside.’

To capture this concept, METAphrenie shot the 90-second title sequence around Dubai. The carefully selected locations show the full spectrum of the city ?‚àö√ë‚àö¬® from iconic buildings like the Burj Khalifa, to far-flung, hidden neighborhoods.

One by one the lights switch off, and the buildings are plunged into darkness. After the landscape is completely dark, the city begins to re-illuminate with the shape of the TED ‘X’ appearing from within the buildings, restoring power and ‘rebooting’ Dubai.