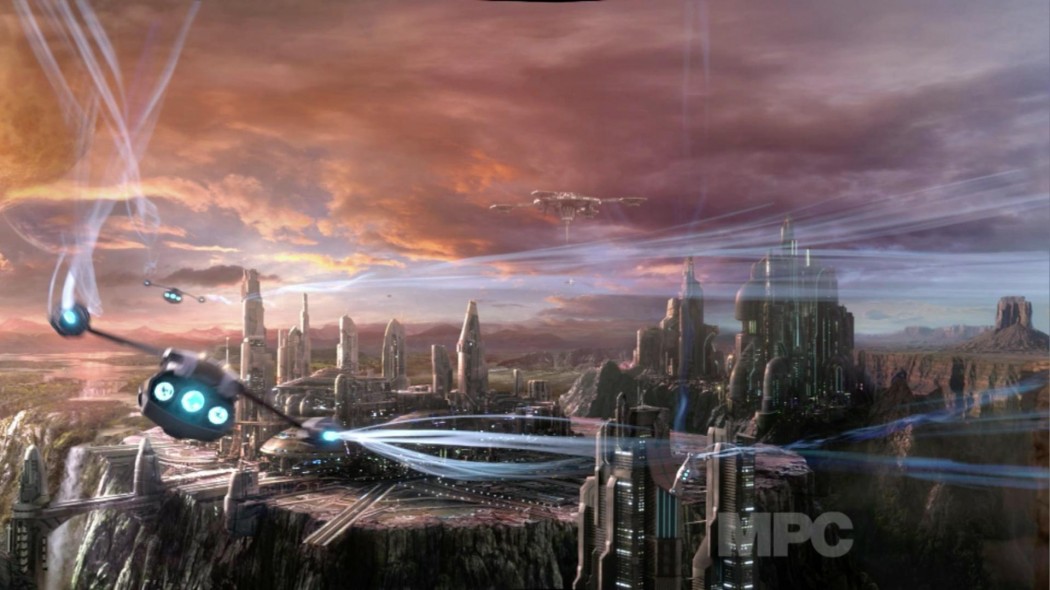 MPC & Sky Creative Look to the Skyline For Movie Channel

MPC has joined forces with Sky Creative to create a stunning stereo campaign to promote their film channel. Directed by Esther Wallace and Nick Tarte and produced by Sharon Kersley, the spot travels through different genres, unveiling epic stereo landscapes.

“It is about escapism (explain the directors). This is our invitation to our audience to enter another world. We wanted to create a 360 pan around massive, epic landscapes populated by movie iconography. The journey takes us through a range of emotions in a similar way that a movie would do. It a peek into movie moments.”

MPC was involved from an early stage, developing the Directors’ vision with mood frames to create the right feel for each of the scenes. The five main genres were represented by different landscapes; desert for western, space for sci fi, city for romantic comedy, country for period drama and ice for family.

To unveil each of the genres, a 360 degree camera move was chosen, passing through the different landscapes. MPC was responsible for creating fully CG environments and rebuilding live action shots, all in stereo.

“This was a job that required very specific timings and planning from 3D previz,” explains 3D Supervisor Duncan McWilliam. “If we could prove all the permutations worked in a previz accurate to real world scale scenarios then we knew the shoot would work…give or take! We spent plenty of time here checking and double-checking, it felt like a NASA project. So when we turned up on set and it all worked and cut together just right the sense of satisfaction was great.”

A stereo camera on a circular dolly track was used to capture the live action footage on each of the locations. One of the main challenges was keeping the images sharp while moving the camera at a high speed. To achieve this, the footage was slowed to half the speed and later interlaced to avoid strobing.

Sourcing paired lenses and calibration after every transit was essential as the alignment had to be so accurate. McWilliam comments, “If there’s once really big thing I’ve learned from the stereo VFX supervision, it’s make sure you take a LIDAR scan of every location. The old ways of running around measuring the set no longer cut it and to track stereo back at the post house is bloody tricky without know dimensions of nearly everything.”

2D Supervisor Matthew Unwin explains, “Tracking all the scenes in stereo with a 20 second shot plus transition duration was proving challenging. Creative briefs were constantly being updated so the team settled to develop the matte paintings and assets for the cg scenes. Now with real plates we were able to update our previs edit and solve the transitional issues.

The scale of each scene was the same physically but the creative scale needed to be different. The brief was to have an epic scale but in scenes such as space-scape the scenes looked flat in stereo. An impressive epic painting in the distance was all very well but in stereo it required foreground elements. We had spaceships but added swirling motion trails and then a foreground canyon edge with interactive dust to solve the problem.”

Stereographer Chris Vincze explains, “As the stereographer on the project my job was to create a 3D stereoscopic environment that matched the directors’ vision, giving the landscapes an epic quality that matched the movie references. The challenge was to strike a balance between having enough depth in the scene to make the 3D interesting, while keeping the scale feeling right. I wanted it to feel like looking out of a window at a real landscape. The challenge was to maintain consistency of depth throughout five different landscapes which were shot in different locations and make it feel like one changing landscape, so I worked extensively with the previs team to set an interaxial distance (the distance between the two cameras) that would work over all the landscapes.”

During the shoot, Chris Vincze worked with the camera rig tech to ensure the minimal amount of rig alignment errors and make sure that everything in the scene fit into the ‘depth budget’ defined by our stereo camera set-up, so everything would be comfortable to watch in the final film.

After the shoot, the plates had to be corrected to balance out any remaining camera rig alignment errors, and any differences between the two lenses. They also had to be colour corrected to account for the difference caused by the mirrored 3d rig.

This process was done in the Foundry’s Ocula plug-in. Keeping the right scale meant that almost everything was set behind the screen, so to enhance the 3d effect MPC worked with the directors and cg teams to add in additional foreground elements.

For example the light trails on the spaceships, dust clouds, butterflies and pigeons were all added in to balance the ‘depth budget’ and make the scene more interesting in 3D. This was especially important in scenes such as the spacescape where the buildings in the city were huge and distant, so you wouldn’t see any parallax difference or real depth in reality.

THE LANDSCAPES
The country landscape
The country scene was the first to be shot at the gardens of Blenheim Palace in England. Real conifers and bushes were placed to enhance the real transition and cast practical shadows over the picnicing family in a period drama scene. The landscape and lake was to be replaced. Having found a city location which was to precede the country scene, the challenge was to find a New York street with specific criteria. Most of the dramatic locations have high towering buildings either side, which meant most of the action would be in shadow and not open to the countryside.

A location was found with 1 storey buildings to one side. The shot would need to be flipped with all signage corrected. MPC setup a 3d previz of the shot using google maps for reference. Once signed off the tech rec was done with precise stills and measurements which was integrated into the evolving edit. The team headed to New York with the limitations of height due to mayors office restrictions. A specific tilt angle had been set and this was now slightly compromised. The choreography of the street we had about an hour to shoot with the correct light due to flaring and loss of long shadows for the noisier romantic feel of the genre.

The City
The cityscape was a real challenge due to the height regulation issue which we knew would come back to haunt us. The transition to countryscape looked like the street was below the level of the lake so we needed to provide a solution. In Nuke, all the buildings were projected around the street and the first two transitional shot structures. We were able to cheat the perspective and lower the buildings then create a European cafe lakeside scene with jetty. The lake was actually raised slightly to blend at the correct level. In mono this is all relatively straighforward but in stereo all had to be checked constantly. However, recreating the entire scene enabled the creatives to develop a city for signoff while we were setting up the transition. A real wall structure was replaced in cg and added foliage, shot in country lake location on bluescreen with the correct lighting helped soften the structure.

The Desert
The shoot team carried on to monument valley, where an intense wrangling of horses over a huge distance was shot.

The move of the camera on a dolly track had to be done twice. Once linear for the loop and in-between scenes and secondly for a slowdown transition where the same linear entrypoint would transition to a move which slowed to a stop with a ten second living hold. This meant choreography of action was crucial. That said wrangling a group of horses with these instructions with riders was rather limited. Interactive dust and horses travelling close to camera were added.

The depth budget was tricky in this case as the foreground riders were pushed in stereo but then the buttes (rear canyon formations), which were 1km away, were flat. Slight depth was forced but then we were travelling into space-scape where the depth wanted to be in the distance. The foregorund elements were added in space as previously mentioned but the transitions we realised in each case had to be constantly tweaked for depth consideration.

The Icescape
The icescape and planetscape both were evolving creatively up to the end which was possible as they were completey cg scenes. The difficulty was solving the scale issues from the cg world to real world items which needed to feature. Over the transitions picnic people, fairies over cracking ice, a galleon ship , penguins to horses. These all had to work together both in the loop and in their individual genre holding scenes for 10 seconds.

“We were embarking on a project that we knew would be challenging both creatively and technically. So it was extremely important to us that we found a post house that was prepared to be collaborative from the word go.

MPC helped us obtain our goal – to create our magical movie world!

Their knowledge & experience in the commercial and film world was crucial to help us provide an ident that has high production values. Every member of the team skills were utilised. It was testing. It was a pleasure working with MPC!”