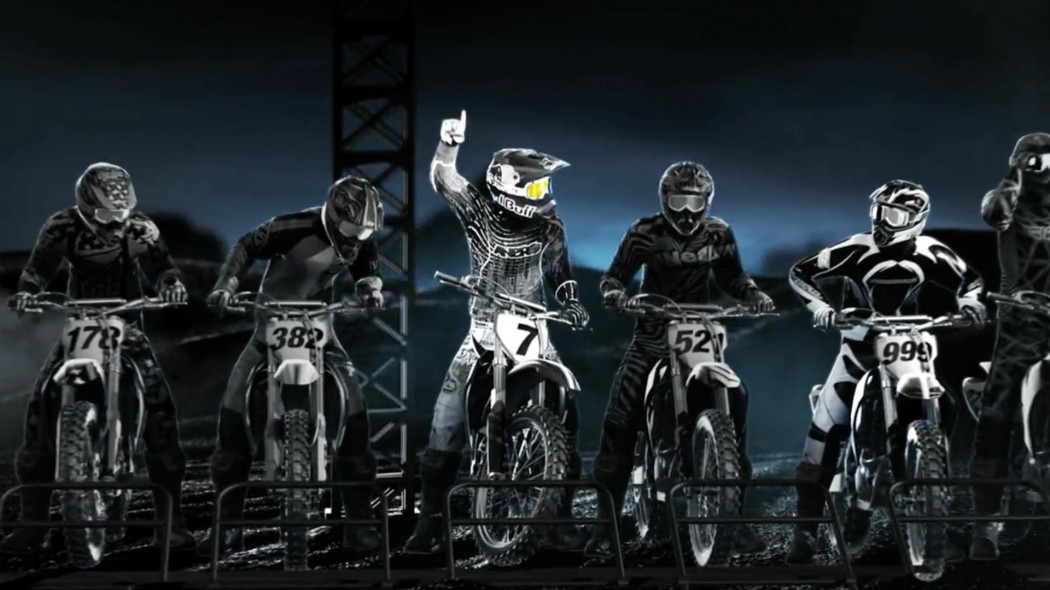 Inspired by classic Hollywood chase sequences, MX vs ATV Alive Announce is a thrilling, :60 ride through a stylized Motocross race course. From the throttle-twisting, gear-adjusting starting line to the ramp-jumping, airborne finale, the spot follows a pack of adrenaline-fueled riders as they tussle through the spiraling, bumpy course, knocking one another off one by one until a lone hero – Supercross champion James Stewart – remains as the victor.

Drawing from work-in-progress box art and website design concepts, Blind created the trailer’s distinctive look. “Even though the final piece is very stylized, we had a mandate from THQ to maintain a foundation of Motocross authenticity,” noted CD Erik Buth. “From the outfits the riders are wearing, to the motion of the bikes on the course, we carefully studied every element of the sport with the goal of creating something that even the most hardcore fan would view as authentic. If they wanted to, fans could go out and actually buy any of the gear featured in the spot.”

To create this realistic effect, Blind focused on two main elements: modeling and animation. The studio modeled and textured the riders and bikes to look as real as possible, recreating actual Motocross gear – helmets, goggles, shirts, pants, boots, even the gloves. Once those assets were in place, animation began. Infusing the sport of motocross with drama and over-the-top action was an inherent aspect of creating an entertaining game trailer, but Blind stayed loyal to the underlying look and feel of the sport throughout. “The dynamics of Motocross are very specific,” continued Buth. “We studied hours of race footage to get the signature moves right.” Blind incorporated Maya, ZBrush, Cinema4D, Photoshop, Illustrator, After Effects, Avid and Flame at various points in the three-month production process.

“Since this was client-direct, rather than through an agency, we had a lot more responsibility to manage the story and the look of the piece than we normally would,” stated Blind EP Dave Kleinman. “Early on the guys at THQ made reference to a Russell Athletic piece Erik had done a couple years back, so that set us up right away with a great working relationship. It felt like a true partnership, in which we were equally engaged in making the trailer as strong as possible.”