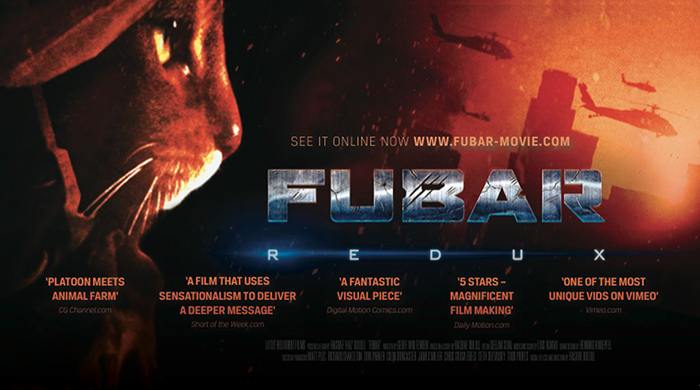 Fubar is a short film best described as “Platoon meets Animal Farm”. An epic socio-political drama driven with a visual narrative, Fubar is a motion comic animated film and is the creation of VFX supervisor and Director Hasraf HaZ Dulull. Fubar is sponsored by London based technology innovator The Foundry and has been created completely using The Foundry’s Nuke compositing tool, and still photography with camera projections.

Nuke product managers Richard Shakleton and Matt Plec supported the idea and provided support with licenses and the supply of all latest Nuke builds to facilitate the production of the film. This process allowed the film to develop alongside the development of Nuke and its tools, ensuring Fubar became a testing tool as well as a short film.

The visual narrative itself was inspired by the short film La-Je-Tee by Chris Marker; which later became the Hollywood film 12 Monkeys. It was this idea of having still photography to drive a visual narrative for a film, to keep the audience engrossed throughout, is how the idea for Fubar was born.

Here director HaZ explains the process behind the making of this unusual short film:

” I said to myself if I was to make a film with a visual narrative device like La-Je Tee today how would I do it with the VFX tools available?” says HaZ. “Todays generation wants to see things in the Z space and not just X and Y like a traditional image or comic book, they want to see form and feel like they can touch i…using VFX technology such as Nuke allowed me to push this visual narrative device to another level, I was able to dimentionalise what was usually 2D into a 3D feel and introduce a new up to date version of the visual narrative device used in La-Ja-Tee and motion comic films.

The film started off as previz produced roughly by using photography of miniature models and placed on cards in Nuke’s 3D space, with a camera to block out the scenes, to start the foundation of sandbox idea.

The previz turned into postviz, where the look started to get fleshed out and animated elements were added and animation inside Nuke generated. (eg: using warp and displacement tools to create animated explosions and fire).

Since this was all done with compositing tools and a compositors mindset the postviz evolved into a visual style, a style which takes motion comics ( e.g: the cobal story segment on the inception DVD) to the next level and ‘dimentionalising’ a 2d style into a style with depth and energy.

A teaser with the postvis shots was shown at IBC 2010 in Amsterdam as part of a show and tell presentation with The Foundry. The teaser was received really well and many thought what was shown was the final shots.

From the postvis the final look and feel of the film was found and not a single CG render required and was done really fast, allowing different things to be tried out in 3D space with a camera.

The workflow was very simple – take as much photography using a Canon SLR camera on a white background and then use Nuke’s Roto and paint tools to extract and place on cards. Nukes keying tools made it possible to extract details from the photo shoots of the cats and dogs as well as researched images.

Then the rest is in creating the world and the imagination of the film inside nuke. It was like being a director, DOP, focus puller, set designer and VFX artist all in one go inside one sandbox environment. There really isn’t any limit on what went into the shots to create an epic grand feel to the film. If there was a need for 20 helicopters and 30 marines I just went and shot loads of angles and poses of the marines and helicopters and then straight into Nuke.

For certain things I was able to get some low polygon models made from a freelancer artist and he would export objs and I would project the photography back on top. Nuke was able to handle geometry with projections, VFX elements like smoke, fire, rain, dust with warp distort operations and tons of cards and camera with motion blur and lens effects all in one compositing environment and a single render pass generated at the end – the final shot.

At the end of the day I am using the most popular compositing tool in the industry to not just paint pretty pictures but to create a visual narrative device to tell a story, and use Nukes 3D compositing tool as a film makers sandbox to make ideas happen fast, efficiently and most of all in a fun creative way with the tools and features right out of the nuke box…the only limit is my imagination”.