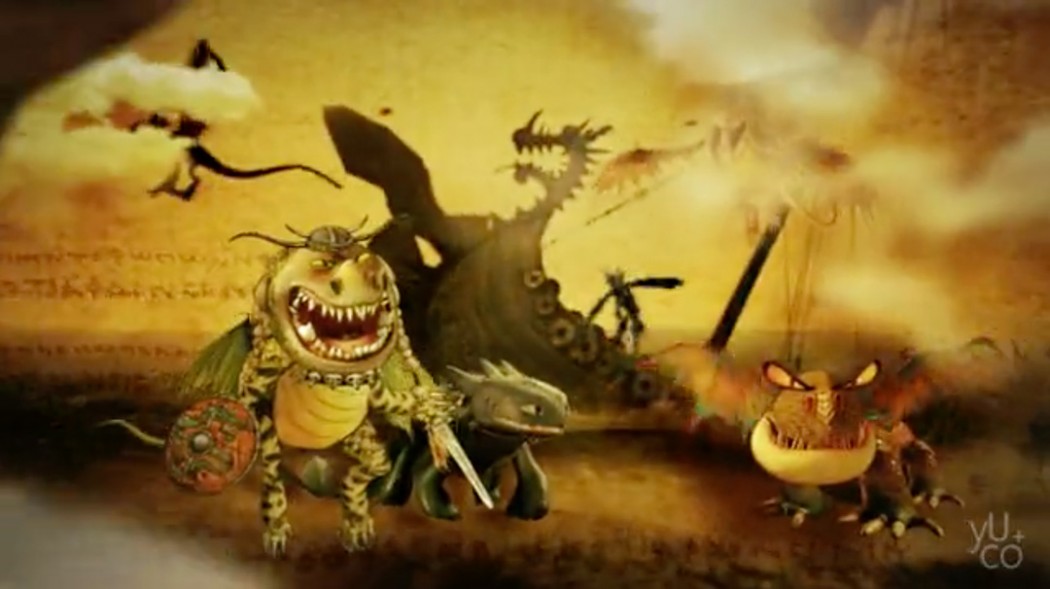 yU+co. Breathes Fire Into Legend of the Boneknapper Dragon

On the heels of the successful animated blockbuster, How To Train Your Dragon (DreamWorks Animation), comes all new dragon adventure “Legend of the Boneknapper Dragon.” To help promote its premiere and promote the ‘build your own dragon’ contest, Cartoon Network asked Hollywood-based motion graphics design studio yU+co. to create two :30 promos. The promos invite viewers to draw their own dragon with a chance to see it brought to life on a future DreamWorks DVD.

“We selected yU+co. because of their incredible breadth of work,’s’s states Leslie Kleine, Senior Producer at Cartoon Network. “They were able to take existing material and build an extension in their own style that beautifully compliments the original piece.”

In order to accomplish that style, yU+co recreated the aged parchment look of the story dragon book and made the drawings in the dragon book come alive.

“From a creative perspective, it was important that our design not only make sense within the context of the movie, but also bring something original to it,” Carol Wong, yU+co. Executive Producer, comments. “It was a bit of a balancing act – we needed to stay true to the film world, with our design adding to it, not simply mimicking the look of the film.”

Troy Gross, Cartoon Network Senior Writer/Producer who wrote the concept and guided the creative notes, “When I saw yU+co. body of work, I knew they would not only be able to execute my concept, but would take it to another level with their artistic excellence.”

Bringing The Book To Life:
Intercut with scenes from the movie, the promos center on the ancient dragon book with the action moving seamlessly between the 3D animated film footage and the yU+co. illustrated world that lives inside the pages. In one particularly eye-catching sequence, the camera pulls literally into the pages of the book, past the type and into a hidden world where dragons of all shapes and sizes dwell.

“We started with the illustrated pages of the dragon book, crafting an aged, parchment paper look,” Kina Choi, yU+co. lead designer on the project says. “We wanted to add more dimension to it so we added the dragons flying out and around the book, casting shadows on the environment, which gave it a more realistic feel.”

For Choi, the biggest challenge was conveying all the information by integrating clips, original animation and typography within just 30 seconds, while keeping it fun and exciting. She notes the yU+co. creative team spent a lot of time creating the many compelling visual transitions seen in the promos, including bleeding ink, flying dragons and leaping fire as a means of carrying viewers through the various environments.

“We began the process by designing the 2D animated pages of the book – the look and feel of the pages, the layout, and the typography,’s’s Choi says. “From there, we designed the 3D animated dragons, starting with elements provided by the client, but then fleshing the character design out further on our own.’s’s The flipping pages of the book were also modeled in 3D.

For Kleine, it was crucial that the promos balance the integrity of the original animation style with the message about the premiere and the contest they needed to communicate. “yU+co. came up with a lot of great ideas to achieve the level of sophistication we wanted. We were also on an accelerated timeline and they were able to roll with the punches.”