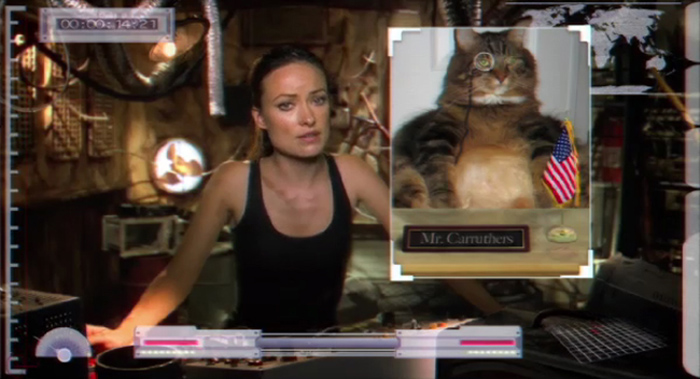 Charged Studios Back From the Future For 2010 Vote

Charged Studios went back to the future to create a bold interactive live-action spot that plays like a hijacked TV broadcast from the year 2057 – sending out a desperate plea for people to vote in the 2010 elections by showing what the future holds if they don’t.

Directed by Adam Pierce and Yaniv Raz, the video opens as actress Olivia Wilde (of ‘House’ fame), a tech-savvy political activist from 47-years in the future, interrupts a news program broadcasted in the year 2010 with an urgent message. Introducing herself as Olivia Kickin’ Chipotle Glazed Time Warner, she gives a frenzied, terrifying, acerbic – and sometimes humorous – account of an America governed by ‘RepubliCorp,’ a war-hungry, inept party that rose to power as a direct result of poor voter turnout in 2010.

The technically innovative imagery was designed, created and brought to life in 2010 by Charged Studios’ director/producer Adam Pierce and his staff of visual FX artists. The team spent a week designing, refining and executing the graphic elements for the video using After Effects. Charged Studios’ Andy Harmon deftly edited the spot, and created the jagged effects that gave it a distinctive futuristic look

Pierce also guided the aesthetic of the apocalyptic style of the set, creating the look of a clandestine rebel hideout. Charged designers and fabricators built the set in the company Brooklyn studio over three-days selecting an eclectic mix of props that included salvaged electronic components, metal scraps and army surplus supplies – to style the environment.

Using an interactive audio track to move the personalization to the next level, MoveOn.org invites users to become part of the storyline by clicking on an element that prompts the character to yell out their names. Charged Studios’ audio division recorded over 500 names to facilitate this feature, as one feature in a multi-faceted audio mix by sound designer Daron Murphy.

Laura Dawn, creative director for MoveOn, was integral to the creation of the spot, including leading the client team and crafting the script with the Onion News Network Michael Pielocik.

Says Dawn, “Charged did an incredible job of bringing our concept and script to life – in fact, the final product far surpassed our wildest dreams of what this interactive video could look and sound like. Charged knocks it out of the park every single time. They deliver creative media on time, on budget, that looks like we spent 2 million dollars on it. For a not-for-profit trying to break through a crowded messaging space, their talent & professionalism has been invaluable.”

The concept for the spot drew strong, immediate interest from talent, as Olivia Wilde came aboard as soon as she read the treatment. Next to sign on was Romany Malco who is best known for his roles in ‘Weeds,’ and ‘The 40 Year Old Virgin.’ Romany brought intensity and hilarity to his role as the fellow political rebel, Alfonso Petfinder Dot Flavorblast.

“This is the second interactive video MoveOn.org has entrusted to Charged Studios,” notes Pierce. “We’re thrilled to have the opportunity to collaborate with talent of their caliber, and use our visual effects talent, technical experience and design aesthetic to help maximize the impact of their messages.”