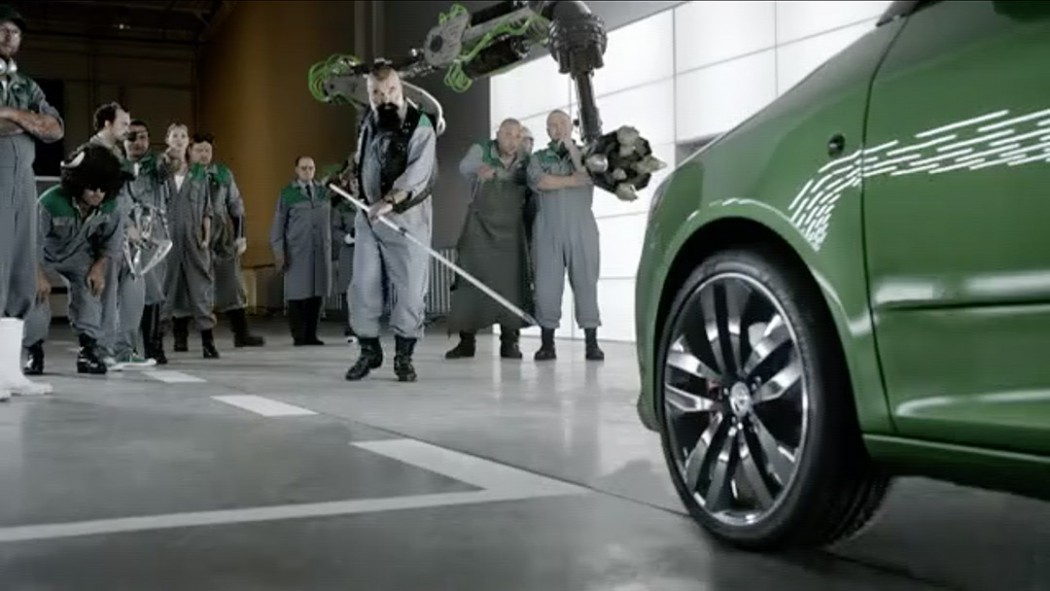 Skoda Gets Mean With MPC

Fallon’s Chris Bovill & John Allison were the creative minds behind Skoda’s latest spot, Mean Green Made of Meaner Stuff, directed by Nick Gordon. A petrolheads fantasy featuring the construction of the twin charged petrol engine with a supercharger and turbo Fabia vRS.

Starting with a nod to its predecessor “Cake”, it suddenly transforms into a metal rendition of “My Favourite Things”. This car is built from altogether meaner stuff. The spot was produced by Angus Smith at Fallon and Sally Campbell at SomeSuch & Co. MPC provided the post, creating the CG snake engine, robot arm, bone chassis and extensive compositing.

MPC’s team led by Rob Walker worked closely with the Director to ensure all the necessary elements were captured in the live-action shoot. While the shoot was taking place in Prague, MPC’s Concept artists were exploring different treatments for the CG elements.

The snake engine needed to look like an engine yet be able to come alive as convincing snakes. The final design used a mix of realistic snake textures combined with metallic/engine textures to create this illusion.

The Robot Arm was required to unfold and extend up to 60 feet to allow the car to be painted in a very precise and dynamic way. The bone chassis was created using digital matte painting, sticking very closely to the design of the actual chassis yet introducing elements of skulls and bone imperfections for the scavenging vultures.

Once the concept was signed off the 3D team was responsible for modeling, texturing and animating the snake engine and robot arm using Maya and Mental Ray. MPC’s 2D team worked on Flame and Nuke to integrate these elements into the live action plates.

The footage was enhanced in post to help the technicians make the various components that form the final car. Smoke, sparks, heat haze and the laser eye beam was also added in post. The spot aired in the UK on 1st November 2010.