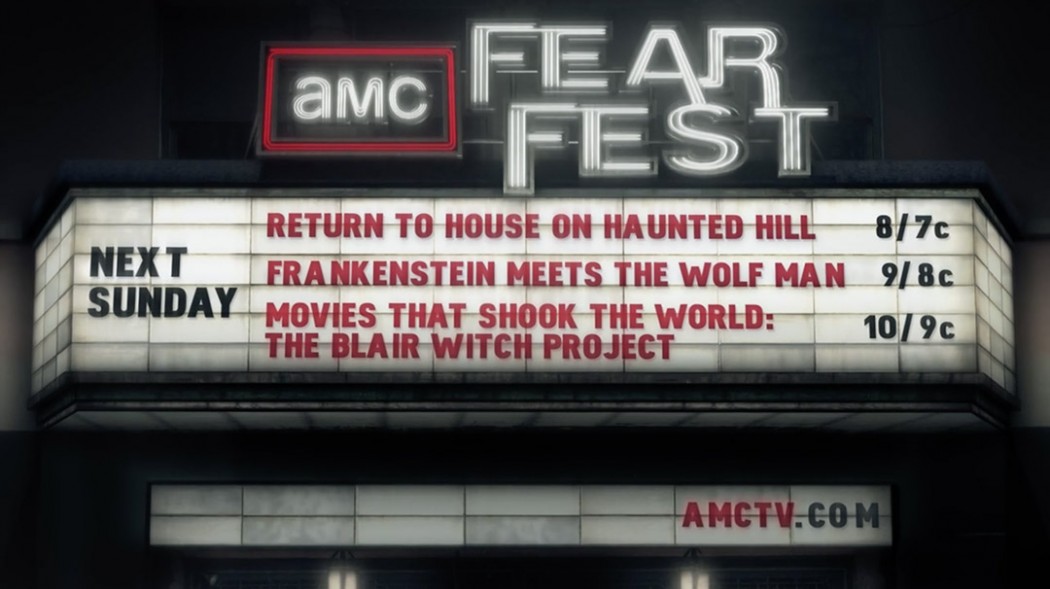 It almost Halloween and that means it time for AMC annual FearFest – the network line-up of classic horror flicks. Helping set the creepy tone is the work of live action/design studio BIGSMACK, who teamed with AMC to create an extensive package of promo and branding elements including opens, bumpers, lower-thirds and IDs.

‘AMC wanted us to create an authentic film fest vibe,’ Jason Salo, BIGSMACK Sr. Art Director, says. ‘The films they’sre featuring are well thought out and paired together in the way a good film festival would. We wanted to get that across in our design.’

To affect that vibe Salo and the BIGSMACK creative team took over an old vacant theater in Lansdowne, Pennsylvania, that has been shuttered since the late 1980s.

Inside those musty surroundings BIGSMACK captured an array of surreal perspectives and haunting POV, such as the dramatic shot seen in the:10 open of a gothic wall complete with pillars as seen from the POV of someone (a victim perhaps?) looking up from the floor.

That live action was composited with numerous 2D and 3D animated elements, most notable is 3D sinister-looking marquee complete with eerily flickering lights and a doorway that vaguely resembles a face.

‘We were going for dark, spooky feel, and because of that we spent a lot time perfecting the lighting,’ Salo notes. ‘They also had a gorgeous old velvet curtain that we put to good use. The combination of live action, design and treatments conceptually set the perfect tone for Fearfest and communicated the idea that this is indeed a film festival.’