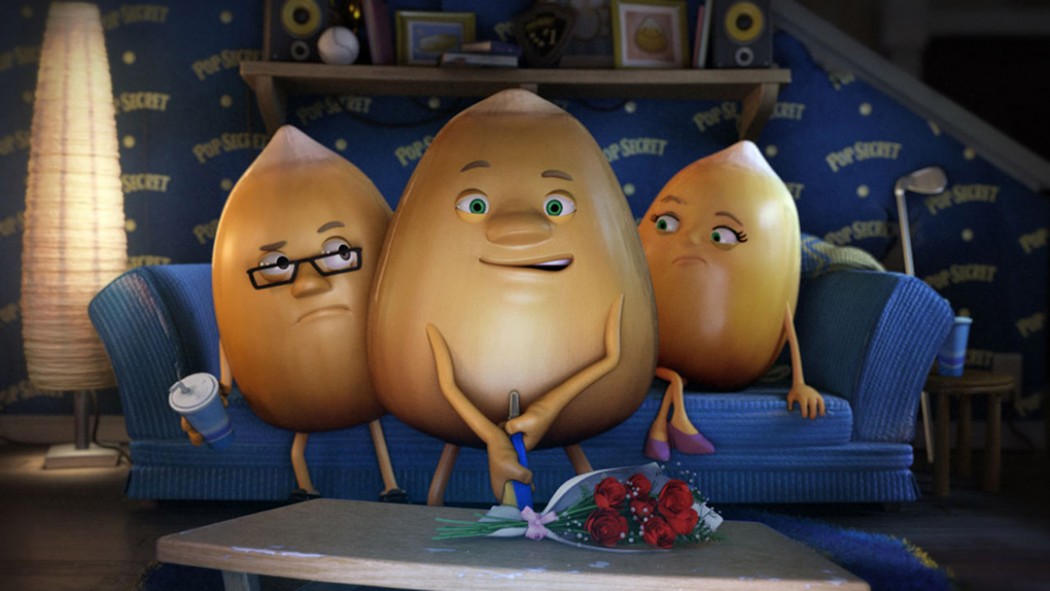 NEW YORK — Oct. 18, 2010 — The principals of world-class animation studio Nathan Love are very proud to announce the debut of When Harry Met Sally their latest in a series of animated commercials for Pop Secret® premium popcorn. The campaign began airing earlier this year with two movie-themed spots, Caddyshack and The Dark Knight. When Harry Met Sally further expands the Kernels’ world, introducing Vinny and Bruce, two sports-loving college buddies and roommates, to a growing cast of characters.

All three commercials will begin a four-week run today, airing over 500 times across ESPN, USA, FX, TBS, TNT and Lifetime networks. They will also appear through Pop Secret’s integrated movie sponsorships on FX, TNT and Lifetime during this period.

“What makes this campaign so popular among viewers are its strong entertainment values and its sense of humor,” said Nathan Love’s executive creative director Joe Burrascano. “The iconic Kernel family is made up of lovable characters with unique personalities and flaws. They warmly invite us into their homes, and the results are engaging spots that play more like :30 sitcoms than commercials.”

Nathan Love’s executive producer Mike Harry added, “Soon after adding Pop Secret to their brand portfolio, which also includes Emerald® Nuts and Kettle Brand® Potato Chips, Diamond Foods turned to Goodby, Silverstein & Partners with the goal of making Pop Secret even more distinctive and recognizable. Naturally, we were very excited to work with them on the Kernels campaign, with its ownable world, original characters and ability to expand the Pop Secret brand across all media platforms.”

The Kernels also appear on the brand’s website, and are featured in Pop Secret’s product packaging and promotional displays showcased in retail settings across America. With an endless supply of movie inspiration to draw from, the Kernels campaign has many opportunities to continue to grow.

“The Kernels’ campaign has resonated strongly with Pop Secret consumers driving the brand’s association with enhanced movie nights at home,” said Andy Allcock, Director of Marketing, Pop Secret. “We are thrilled to be debuting the new When Harry Met Sally spot this week as we believe it to be Nathan Love’s best work yet!”

Launched in New York in 2007, Nathan Love has quickly become known for creating lovable, original animated characters, and this high-profile campaign is a big reason for that. At the 31st Annual Telly Awards this June, which judged nearly 11,000 entries from all 50 states, Nathan Love received seven honors, and four of them – Commercial Winner for Use of Animation and Food/Beverage, Bronze for Art Direction and Use of Humor – were for The Dark Knight. Also, Burrascano was honored at this year’s SHOOT Magazine New Directors Showcase, where his screening of The Dark Knight earned a huge wave of applause.

For other brands and agencies seeking to develop their intellectual properties across different media platforms, Burrascano feels Nathan Love has a lot to offer. “We now have the experience and skills necessary to develop characters and other assets for cinema, television, games and online content, print, toys, merchandise and beyond,” he explained. “For example, we produced When Harry Met Sally in stereoscopic 3D, even though it wasn’t anticipated for this campaign. We hope that shows how resourceful we are as production partners to our clients.”

“Working with GS&P, we’ve had the chance to design new characters, produce the sound design and original score with Drew Skinner, and offer input into the scripts and casting sessions,” said Harry. “They’ve shown tremendous faith in our abilities, and we’ve been inspired by their trust. Having these spots back on the air is a huge thrill for us all.”

Nathan Love’s visual artists on this campaign used countless tools, digital and traditional. In their digital toolkit, Adobe Photoshop was used for design and matte paintings, Autodesk Maya for 3D modeling and animation, Z-Brush for additional modeling, Adobe After Effects for compositing and animation, The Foundry’s Nuke for additional compositing, and Temerity Pipeline for rendering and project management.