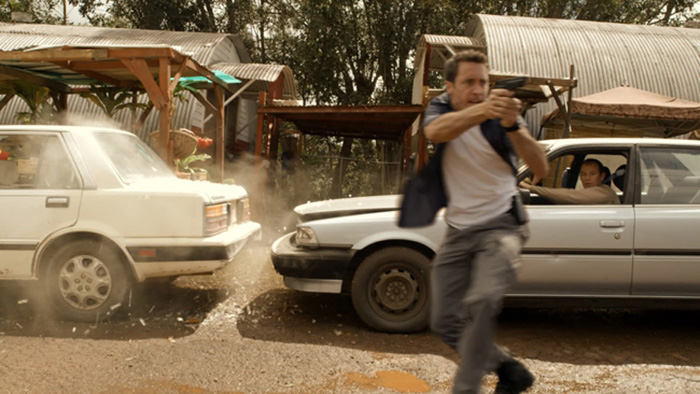 The creative team at Ntropic, led by Founder/Creative Director Nate Robinson, has created visual effects for the all-new “Hawaii Five-0.” The highly anticipated re-make of the classic show makes its debut on CBS this September, and provided Ntropic with the exciting opportunity to collaborate once again with Director Len Wiseman (“Underworld,” “Underworld: Evolution”).

“I’ve had a long working relationship with Ntropic,” says Wiseman. “Some of the key VFX shots for ‘Hawaii Five-0’ required a lot of complicated layers. I knew the schedule wasn’t going to allow the time to shoot greenscreen passes. But I still wanted to shoot the stunts with in-camera atmosphere elements; real explosives, smoke, sparks, debris, etc. Nate and I have had success planning out these sort of shots before, so I was confident that I would get photo-real shots with Ntropic. They are some of my favorite shots in the show, and CBS clearly felt the same because they ended up being used in about every promo.”

For Nate Robinson at Ntropic, partnering with Wiseman again on “Hawaii Five-O” gave him the chance to build on the “creative short-hand” that he and the Director developed during the production of Wiseman’s signature films, “Underworld 1 & 2.” “It gave us the chance to utilize techniques that we had created, and to push the limits, having a somewhat shared creative sensibility.”

Recent projects for Ntropic include an innovative commercial campaign for Dickies, as well as commercials for Bank of New York, EA Sports, and Campbell’s Soup.

Ntropic draws its strength from a diverse background of creative talent. Assembling a global community of artists in multiple locations, the studio has built a creative collective with strengths in all facets of post-production ranging from conceptual design and motion graphics to photo-real CG and seamless compositing. Ntropic focuses on elegant, intelligent, and conceptual visual effects producing award-winning work for commercials, music videos, feature films, experiential theaters, and interactive content.

As industry mediums rapidly change, Ntropic maintains a foothold on the bleeding edge of technology… leading the charge into a new era of entertainment media. The studio removes the mystery from the black box of technology and operates as a creative hub for directors and agencies to converge and collaborate without limitation.

Ntropic’s creative directors thrive on the unique challenges of production and work closely with the creative team to concept, visualize, and realize their artistic vision. Offering innovative solutions for otherwise impossible tasks, Ntropic inspires artists and filmmakers to expand the horizons of possibility.

The studio’s objective is to create an inspirational environment for artists and clients to come together and not worry about the how, but stay focused on creating the most fascinating and innovative work to date.