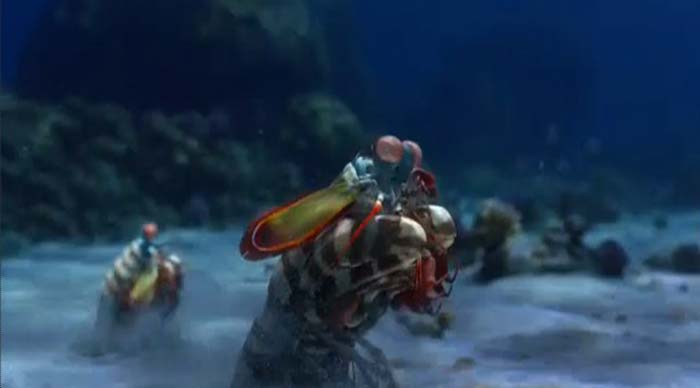 Fallon and A Glass and A Half Full Productions have created Cadbury’s latest commercial ‘Spots V Stripes’, an underwater adventure eagerly anticipating the ‘big game’ of 2012. Nick Gordon directed the spot through Academy Films and Augusto Sola was the Creative Director. MPC created a full cast of over 60 photorealistic CG creatures and provided extensive environment work.

As an official sponsor of the Olympics 2012, Cadbury is already building up for the event and has created their own big game, sub-aquatic style. MPC was involved during pre-production including pre-vis and concept work to develop the right look for the creatures and the environment. It was clear from an early stage that VFX would play an essential role in the success of the ad; all the animals had to be fully CG and most of the environments had to be created or enhanced in post. MPC Jake Mengers led the team as VFX Creative Director with Stefan Gerstheimer as 3D Supervisor and Michael Gregory as 2D Supervisor.

The Director wanted to create a photorealistic look for the creatures but their livery had to be adapted to fit with the teams; stripes and spots. MPC main challenge was modelling, animating and texturing 14 different types of animals including turtles, devil rays, octopuses, sailfish, ducks, crabs and mantis shrimps. All the assets were modelled in Maya, painted in ZBrush, textured using Body Paint and rendered with Mental Ray.

The live action plates for the environments were captured in the Red Sea during a 5-day shoot. Many of the underwater environments were rebuilt entirely using a combination of 3d elements and live-action projections.

Reference material gathered during the shoot helped the 2D team recreate the environment matching detritus, caustic light and the light rays in 3D, combined with volumetric shadows for added realism. A lighting setup was designed to mimic the underwater conditions in a render efficient way.

‘To composite the creatures into the live action plates we looked at a lot of real reference we had shot and also lots of underwater stock footage – explains 2D Supervisor Michael Gregory. With the help of some wonderfully lit cg and some irridescence passes we were able to seamlessly composite them back into the plate. Paying particular attention to the depth cueing of the shot and adding light rays, subtle flares and detritus helped us bring all the shots to life.’

The balloons were rendered with 4 different textures including barnacle, lichen and moss passes then integrated with 3d bubbles and exploding cloudy fluid simulated in Maya.

The crescendo to the commercial is a slow motion exit shot with a Tufted Duck being chased by the Sailfish and Devil Ray. The duck was feathered using Maya Fur and rendered using Mental Ray. All of the slo-motion water elements were created with bespoke Bokeh and Real Flow water. Jean-Clement Soret added the all-important master grade.

“I remember the reaction when I first shared the idea with the Client. “We love it”, they said “But how the fuck are we going to do it?” I had the same thought as I never before worked on such a big a post production job and the ad relied on a flawless post production. After 9 months of working with Jake and his team of 40 guys and with Nick I can say we fucking did it…” Augusto Sola, Creative Director.