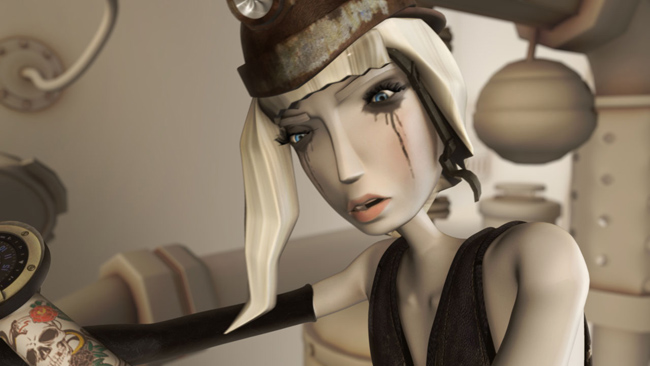 Blind Founder/ECD/Director Chris Do, in a direct-to-client relationship with The Raveonettes, their management at The Orchard and Vice Records, just pushed out his second video for this Danish alt-rock duo. The video, set in a fantastic illustrated world, portrays the epic journey of a heartbroken man rambling across a unique and beautifully stylized landscape – a subtle blend of Pop Surrealism and Victorian/Steampunk aesthetic – created in Do’s unique style.

This latest video project was built on an established relationship between Blind and the Raveonettes, which began with the creation of a stirring animated black-and-white video for apparel giant The Gap. Vice Records – the band’s label – contacted Blind to conceive and produce the Heart of Stone video after the success of the Sound of Color project. The Raveonettes wanted the Heart of Stone video to be a poignant companion to the stirring song and the group entrusted Do once again. “It’s a tough thing to live up to when a client trusts you enough to give you total creative freedom. It’s both a blessing and curse. The bar, by virtue, is set very high. If the project fails, there’s no one to blame- so it better be good,” comments Do. He carefully designed a story and look to complement themes consistent with the band’s sound, texture and tone. “The song’s lyrics inspired the story – a man who’s buried his emotions as a reaction to having been rejected by his lover. By denying his own feelings, he shuts down the pain he feels but sets off a chain reaction of inner turmoil.” Do created two distinct looks to differentiate the two worlds of the complex story – a dark, gritty exterior world that the man physically travels across, and an inner world that’s stark, ethereal and luminous that slowly disintegrates, acting as a physical manifestation of emotional events and symbolizing the chaos wrecked by the denial of his pain. Both settings feature a limited color palette, contributing to a somber mood and overall surreal tone. The entire video is a first-class visual spectacle. As the guitar intro ripples over the screen, Do reels the viewer in with overviews of a world of airborne steel-framed platforms that is at once austere and interesting. A man receives a phone call carrying the news of his breakup, and his mood immediately disintegrates. He strikes out from the stark green house and begins a rambling journey across his twisting elevated homeland, the skyline an assortment of machinery, water tanks, and ornate iron work.

As the first verse begins, we peer into the inner workings of the man’s body, a jumble of ducts, gauges, pipes, gears and levers portrayed as part of a massive factory – a monolithic and sprawling place evocative of a Soviet-era manufacturing plant. As the man’s emotions boil inside with no release, the machinery begins to fail and the second character emerges – an inner caretaker; a woman who works fiendishly to repair the various pieces as they slowly deteriorate. The interior and exterior quests continue through two more verses and the repeating chorus, as the man spins along in a primitive automobile and his heart slowly fills with poison and collapses inside, despite the heroic efforts of his interior guardian angel. Do posted updates weekly and the band was unequivocally pleased at every point, encouraging Blind to keep pushing. The entire process, from pre-visualization to final delivery, took an intensive month of labor, an incredibly abbreviated timeline given the complexity of the completely original animation. “The band wanted to make a video that was a piece of art, an attitude stemming from their background in Denmark. This gives them a different set of priorities, such that art exists for art’s sake and not for commerce, which was really attractive to Blind,” noted Blind EP Dave Kleinman. “This outlook made Chris the band’s ideal partner since he’s constantly dreaming up new projects to work on. Just like many lasting client relationships, the trust we’ve established with Sune, Sharin and their manager, Scott Cohen, serves all parties very well and offers us the freedom to push visual boundaries without worrying we might be going too far. I believe this reflects well on our staff and their unique talents.” Heart of Stone premiered February 22nd on Vevo and then the following week on YouTube. The video will also be submitted to MTV and other outlets, and will play extensively in Europe.