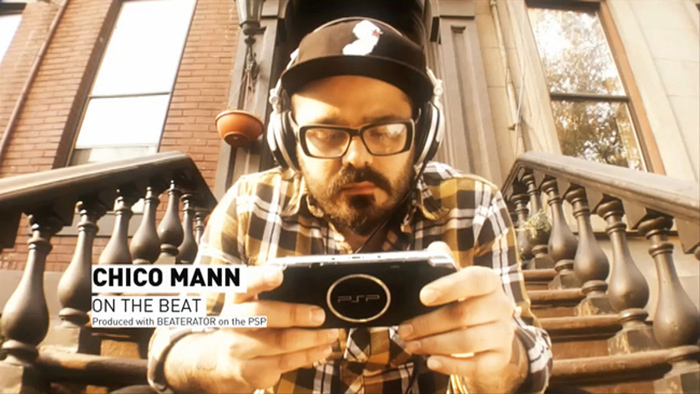 Manic Mixes Something Special for PSP

Manic Director and VFX Artist Nick Sasso shot, edited and handled all post production on a series of five web virals for the new mobile studio/beatmaker feature on the hit Beaterator video game for SonyPlaystation Portable (PSP). The videos, done in collaboration with Wax Poetics for Rockstar Games (of Grand Theft Auto fame), each feature known musicians, lost in a creative haze as they mix new tracks on Beaterator.

Sasso perfectly meshes the energy of the underground music scene and the creative capabilities of Beaterator with wordless sequences set against an array of Brooklyn and Jersey City landmarks, classic city buildings, and small businesses. Chico Mann features the artist of the same name rocking out to PSP on his city stoop before descending into his basement studio.

Chin Chin and Psycho Les feature those artists similarly jamming between Beaterator and their studios. KDef stars that artist sifting through the overstuffed racks of vinyl in a glorious old record store while pausing to mix on his PSP. Spree Wilson is set against the soaring Brooklyn Bridge and the Hudson River, with Wilson enraptured with his creative efforts. Energetic, colorful graphical patterns bring each spot to a close. Sasso shot the videos over the course of three days on a RED camera.

“Beaterator’s new mobile studio is a very cool piece of technology, as it lets musicians create high-quality music that’s equal to what once took a roomful of equipment to design,” noted Sasso. “I wanted to create spots that captured the focus and energy of these musicians while making it apparent that the PSP was at the center of their craft, which led to awesome shots of truly talented artists immersed in a creative trance.”

“Nick continues to impress with his ability to take a creative concept and turn it into a final product,” stated Manic Managing Director Bob Cagliero. “He can single handedly take on the workload that usually gets shuffled around between three or four different studios. Nick’s work ethic and versatility are trademarks of our very strong staff, which is exactly why agencies keep coming back to Manic.”

About Manic:
Manic is a comprehensive creative solution for conception through completion of all media. Based in NoHo NYC, Manic delivers live-action production, cutting-edge motion graphics, 2D and 3D VFX, design, animation, and high-end finishing services for clients working in commercials, feature films, television, music videos and broadcast. The company’s artists and principals have led campaigns for notable brands such as Nike, Virgin Mobile, Acura, Reebok, Verizon, Maybelline, and Apple from major agencies TBWA/Chiat/Day, Merkley+Partners, McCann Erickson, and JWT to name a few.