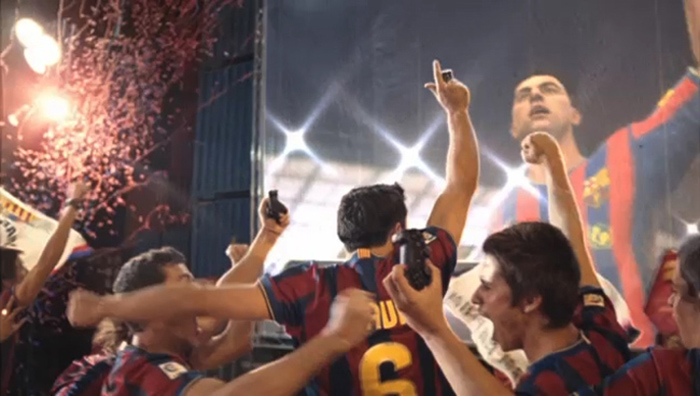 The Mill has teamed up with Wieden+Kennedy Amsterdam and Knucklehead and has created an epic 120 second spot for the October 2nd international release of EA Games’s FIFA Soccer 10 computer game. Featuring some of the world’s leading players including Manchester United’s Wayne Rooney, Barcelona’s Xavi and Real Madrid’s Benzema, the ad kicks off a global adventure that sees gamers and footballers from around the world clamouring to play the new game.

From Tokyo, to New York, crowds of players young and old assemble around screens to make their debut on the pitch for their favourite team. As the drama and excitement builds to kick off, a colourful carnival atmosphere erupts, uniting people across the planet.

Rich Roberts, Lead Flame at The Mill explains: ‘The ad uses a combination of stock footage, live action, game footage and 3D elements. One of The Mill first key challenges was to capture the right gaming footage for inclusion in the spot, so expert gamers were asked to play the game to produce the right moves which were then recorded on to HD and edited into the final ad‘.

He added: ‘To create the impressive city and global backdrops, matte paintings were combined with stock footage to extend the cityscapes and augment the stock shots and achieve the ad epic sense of scale. Matte paintings were also used for the stadium shots, which were then populated with Massive crowd simulation.’

Amongst the many 3D elements in the spot, were the hundreds of CG footballs which can be seen tumbling out of a football net; footballs floating in the sea and the enormous hot air balloon football in the final scene. The Mill also filled the many screens throughout the spot with game footage as well as cleaning up several shots and removing branding from stock footage. A final grade was applied to bring together and seamlessly blend the multiple media types.