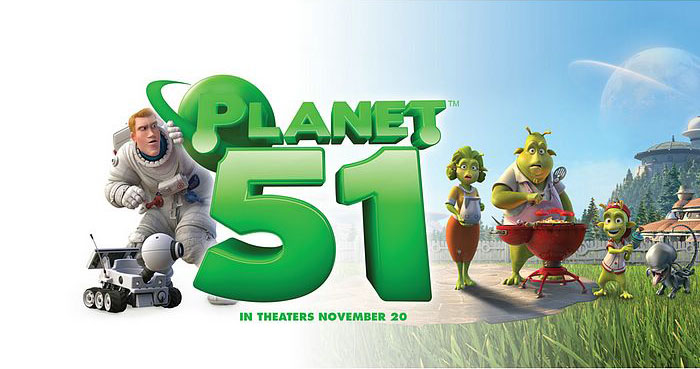 The official website for Planet 51 has been launched and includes in-depth character profiles, fun games and a brilliant ‘create your own avatar’ feature. Planet 51 is a galactic sized animated alien adventure comedy revolving around American astronaut Captain Charles ‘Chuck’ Baker, who lands on “Planet 51” thinking he the first person to step foot on it.

To his surprise, he finds that this planet is inhabited by little green people who are happily living in a white picket fence world reminiscent of a cheerfully innocent 1950s America, and whose only fear is that it will be overrun by alien invaders…. like Chuck!

Chuck finds himself on the run, frantically trying to avoid capture by the local Anti-Alien Army, who are fuelled by a paranoia of an invasion from outer space. He finds himself befriended by Lem, a friendly teenager, who is fascinated by the world beyond his planet, and determined to help Chuck recover his spaceship and return home.

With the help of his robot companion ‘Rover’ and his new friend Lem, Chuck must navigate his way through the dazzling, but bewildering, landscape of Planet 51 in order to escape becoming a permanent part of the Planet 51 Alien Invaders Space Museum.

Planet 51 was produced by Ilion Animation Studios and Handmade Films, and stars the voices of Gary Oldman and John Cleese. The film title is reportedly a reference to ‘Area 51’ a disputed storage and examination site of UFO material, supposedly recovered from New Mexico, after the 1947 Roswell UFO incident. Planet 51 is due for release in November 2009.

About Ilion Animation Studios
Ilion Animation Studios was founded in 2002 to create state-of-the-art computer animated movies for worldwide theatrical release using its own purpose-built cutting-edge technology. Ilion Animation Studios and companies Zed and Pyro Studios, were founded and are run by Ignacio Perez Dolset (CEO of Ilion and Pyro) and Javier Perez Dolset (CEO of Zed). Zed develops and markets entertainment and community products and services for mobile and the Internet. Pyro Studios, creator of the international best-seller video game saga Commandos, is dedicated to latest generation video game development for the international market.