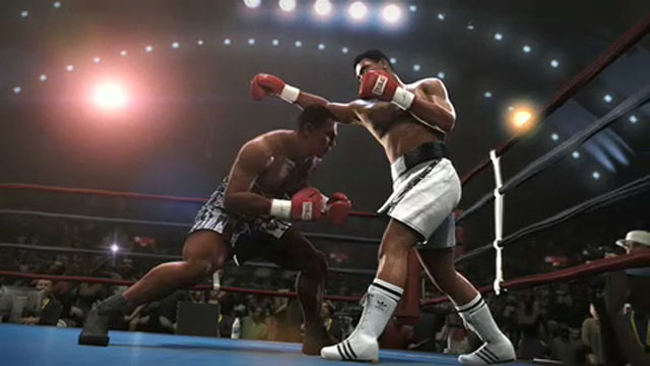 In Fight Night 4 players from the past, in the prime of their game, go head to head. The Framestore spots pit the intimidating strength and defensive genius of heavyweight champion, Mike Tyson, against the “float like a butterfly and sting like a bee” of the great Muhammad Ali.

Framestores brief was to show off the advances in the new game and showcase how those advances improved the experience for the player, while also adding cinematic texture and style.

“The guys at EA were understandably very proud of their in-game graphics and we had to maintain the same quality and style of finish” remarked Framestore Director David Hulin. “Our job was to take the game and make it feel like a scene from a movie. The scripts were all about the tension of such a legendary fight and so we spent a lot of time working on the choreography and edit, referencing classic boxing movies and also key moments from Tyson and Ali’s individual fights”.

To bring the new EA campaign to life, Framestore collaborated with artists at EA to capture some footage that was generated through the in-game camera. Framestore also created large amounts of bespoke animation in house using assets from EA. The Framestore team was ultimately successful in blending both elements seamlessly into two incredibly dynamic spots.

“The challenge throughout the project was to stay true to the game footage while creating a more cinematic atmosphere,” said the co-director of the spot, Andy Walker. “It would have been easy to apply the gloss and finesse of pre-rendered footage, but we needed to keep the raw, real time quality, so that we could seamlessly mix post rendered graphics with the game capture.”

Framestore also augmented the game footage with their animation magic, this gives the fight scenes that nostalgic and yet vivid feel that the clients wanted to match the feel of the new EA game.
Lead Animator, Kevin Rooney, explained, “Animation-wise we wanted to introduce more signature Muhammad Ali and Mike Tyson moves to the commercials. We also wanted to re-enact some of the existing TV coverage-style camera moves and angles to really add to the realism of the fight.”

About Framestore:
Framestore has been working in digital film and video for over 20 years now, creating original and astonishing work that has helped make it the largest visual effects and computer animation studio in Europe. Since 2004, Framestore NY has been flying the flag in the world of US commercials, landing work for clients such as GE, FedEx, Hoover, Pepsi, Nike, Smirnoff, and Coca-Cola, and winning top awards including both an Emmy and a VES in 2006.