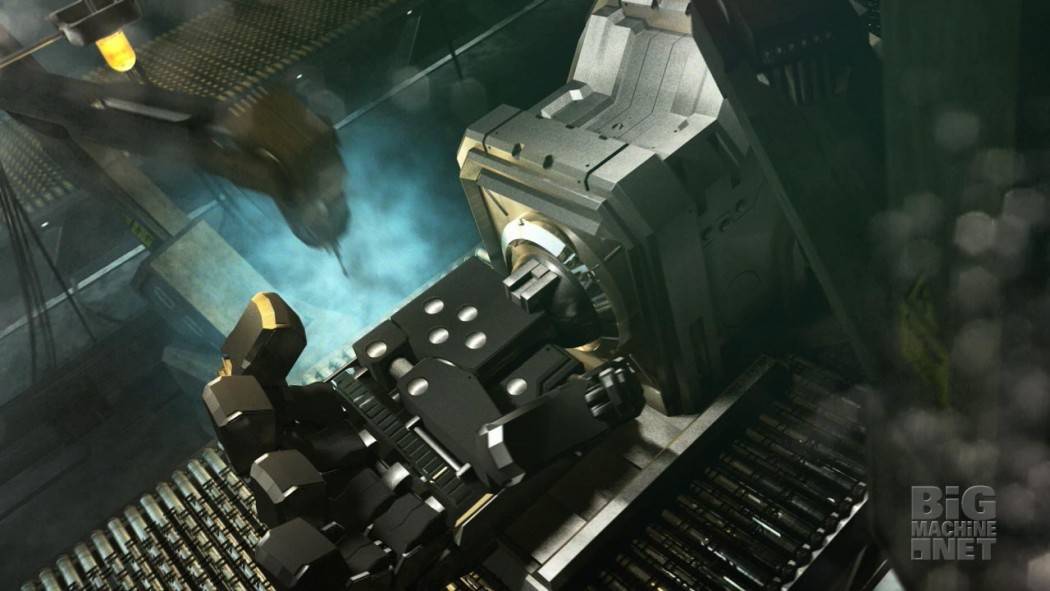 The teaser trailer premiered at E3 2009 and is currently experiencing broad pick-up on popular Internet game trailer and video sharing websites worldwide. Viewers are taken on a fly-through around a massive factory and futuristic cityscape being ravaged by warfare. The advanced functionality in CINEMA 4D is demonstrated by dramatic explosions and enormous marauding robots, while periodically cutting away to focus on assembly line machinery being built within the factory walls. The action culminates in a close-up street scene of robotic warriors rushing through the decimated city with high-tech weapons raised and ready to strike. Front Mission Evolved is poised to become the newest game in the wildly popular Front Mission video game franchise. Created by world-class game developer Double Helix, on behalf of Square Enix, a leading video game producer, the games main interactive elements are giant armored humanoid battle vehicles known as ‘Wanzers,’ which are controlled by the player within an overall context of military conflict and political tension that takes place in a future society. Front Mission Evolved advances the Front Mission series by extending gameplay to a third-person shooter perspective.

‘CINEMA 4D has been our go-to 3D software package for almost every visual campaign since we first opened our doors in 2003 but for this particular project we knew we’sd have to take advantage of its powerful Studio Bundle to successfully create the level of excitement required for the first reveal of such a highly anticipated game during E3,’ said Ken Carlson, creative director, Big Machine Design. ‘Our goal was to deliver a piece that would capture the intensity and raw power of the immensely popular Front Mission series while conveying a sense of what a player can expect from both the characters and the game environment. CINEMA 4D provided us with the most comprehensive suite of 3D tools for modelling, texturing, lighting, rigging and animation – enabling us to get the project done quickly and with great results.’

‘Game cinematics and game promotion in general is one of the fastest growing areas for visual content creation and it exciting to see our customers working on the cutting edge,’ said Paul Babb, president, MAXON USA. ‘Delivering a software product that helps customers like Big Machine Design achieve its goals is our number-one priority, and we are proud our software played such a signifcant role in helping them to successfully create and promote one of the game industry most anticipated game titles.’ Carlson added that the ability to turnaround a quality, high-impact product quickly was essential due to an unusually tight four-week deadline. ‘Taking on an extremely challenging project with this level of complexity from concept to completion with just four weeks lead time would never have been possible without CINEMA 4D. Unlike most 3D packages, CINEMA 4D is extremely easy to use and set-up is both logical and intuitive. We used almost every module in the application including Advanced Render, Thinking Particles, MoGraph and MOCCA as well as its Xpresso visual node-based expressions editor, which allowed us to spend every precious minute bringing our vision to life and tackling content creation challenges instead of wrestling with software quirks.’

Inspired by concept art and low-poly models provided by game developer Double Helix, BMD created its own high-poly, ready for high-definition models and used CINEMA 4D to animate all the street-level and factory shots. To accomplish the seamless movement of the Wanzers the BMD team used colleagues as stand-ins for the robots, shooting those segments while working out the choreography in real-time. Those performances were then used as a guide for animating the rigged mechs in CINEMA 4D using slider controls so almost anyone in the office could help with the animation regardless of MOCCA skills. Sky images were created in Vue Xstream 6 with camera data exported from CINEMA 4D. BMD relied on the built-in renderer in CINEMA 4D to quickly multi-pass all 3D scenes and composited with Adobe After Effects, taking advantage of the tight camera integration between the two applications. In addition to Front Mission Evolved, BMD has turned to CINEMA 4D to complete several other notable projects in 2009, including the show and promo package for Food Network Ultimate Recipe Challenge, the show package for ABC Live with Regis & Kelly, Paris Hilton My New BFF, and the promo package for Animal Planet Beverly Hills Groomer.

About Big Machine Design Big Machine Design is an award-winning visual production company founded in 2003 by Steve Petersen and Ken Carlson that produces visuals for everything from film titles, advertising, TV shows and games to multi-screen experiences and mobile devices. Recent BMD clients include Animal Planet, CBS, ABC, NBC, FX, MTV, TLC, Food Network, Disney, Bohan, Ackerman-McQueen, Sony and NFL Network among many others. About CINEMA 4D CINEMA 4D is a robust 3D animation software application. Its core application contains everything needed to quickly and easily create high-end 3D images and animations. Additional modules provide added functionality and customization to suit a wide array of industries. Modules can be purchased individually or in bundles. CINEMA 4D renders scene files directly to popular editing and compositing applications including After Effects, Final Cut, Shake, Combustion, etc., and is completely cross-platform for Windows and Mac. About MAXON Computer MAXON Computer is a developer of professional 3D modeling, painting, animation and rendering solutions. Its award-winning CINEMA 4D and BodyPaint 3D software products have been used extensively in the film, television, science, architecture, engineering and other industries. MAXON has offices in Germany, USA, United Kingdom, France and Japan. MAXON products are available directly from the Website and its worldwide distribution channel. Specially priced learning editions of the company software solutions are also made available to educational institutions. Related Links www.bigmachine.net www.maxon.net