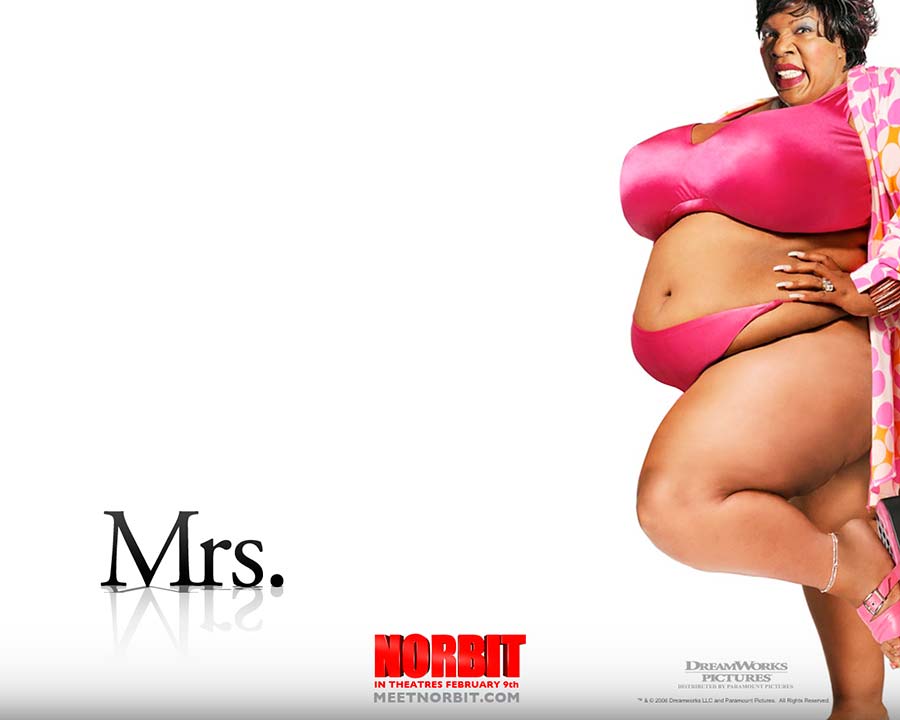 Digital Dimension, completed 162 shots as the lead visual effects provider for the DreamWorks comedy Norbit, magically transforming Eddie Murphy’s slender frame into the 400-pound female lead, Rasputia-also played by Murphy. A large portion of Digital Dimension’s shots involved head replacements where Eddie’s face, made up to look like Rasputia, was composited onto the performance of a body double.

“Despite the fact that the effects in this film are invisible, they are all extremely complex. Because Norbit relied so heavily on physical comedy, it was essential for our digital composites and CG to be indistinguishable from anything shot practically,” said Benoit “Ben” Girard, President, Digital Dimension. “This required great attention to detail on behalf of our effects team, and we’re really proud of their work.”

The sheer weight of the make-up required to turn Eddie Murphy into the 400-pound Rasputia led Murphy and the Norbit team to favor digital head replacement for the film’s memorable water park sequence. The majority of shots at the water park were performed by body doubles; Murphy then performed the corresponding facial expressions in front of a green screen, with his head made up to look like Rasputia. The two were later integrated into seamless performances by Digital Dimension’s talented team of artists.

“The body double’s performance was stabilized at the neck so Eddie and the Director, Brian Robbins, could see what head actions would be necessary to match the body” says Digital Dimension composite supervisor Erik Bruhwiler. Even so, this was merely the starting point for Murphy’s portrayal of Rasputia. “It took a lot of artistry on the part of our compositors to combine Eddie’s often frenetic performance with the more subdued performance of the double. The green screen photography also lacked the subtleties of the on-set lighting, and we took care to add these aspects back into the final composite.”

In one of the movie’s most memorable gags, the turnstile attendant at the water park asks Rasputia whether she is wearing bottoms, in response to which Rasputia lifts up her sagging belly to show him that she is indeed wearing a tiny bathing suit. In the original plate, the body double’s right pink bikini bottoms were clearly visible as she approached the turnstile, so paint-roto supervisor Tammy Sutton devised a method for hiding them until the reveal, using the grid warp tool in Eyeon’s Digital Fusion software to extend her belly down over the bathing suit. “We were careful to stretch the entire belly evenly so it wouldn’t be a noticeable effect, and kept the natural movement intact by mimicking the movement of the skin while she walks,” explained Sutton.

In another water park scene, digital artist Brian DeMetz creates torrents of computer generated water to complete a fully composited shot simulating water bursting out of a chute as Rasputia takes a ride down a water slide. Many other shots involving split screens, the most basic technique for combining multiple performances by the same actor into a single shot, were taken to the next level. The first scene in which Norbit and Rasputia appear together, dancing at their wedding, required painstaking artistry to ensure that Murphy’s face did not slip in relation to the body double’s head. Other shots involved placing Mr. Wong (Murphy wearing flawless makeup created by Rick Baker) into scenes with Norbit (also played by Murphy). “We were very particular about how those shots should look,” reports Erik Bruhwiler. “Any time the characters crossed over each other, or even got near each other, we wanted shadow integration and light bounce, which was critical to tie them together in the scene. There are even moments where they’re not actually touching, but we’d do a little cloth deformation to make it look like they’re rubbing against each other, just to sell every single shot as being in-camera, and not an effects shot.”

The movie’s most extensive use of 3D animation appears in a scene where Norbit receives unexpected marital advice from neighborhood dog Lloyd, played by a pug named Mushu (previously seen in a speaking part in the Men in Black films). A photo and video shoot with Mushu allowed Digital Dimension’s 3D team to record his range of motion and facial expressions, and gather extensive texture reference. Digital artist Phi Tran built Lloyd’s head using 3ds Max based on Cyberscan data of Mushu. Multi-angle HD footage of the dog was recorded on-set to aid in tracking head movements. Flesh simulation tools were used to add secondary jiggle to the pug’s lips and jowls, which made a big contribution to the believability of Lloyd’sperformance.

Digital Dimension’s work on Norbit is their latest release in a string of #1 hit movies, including Talladega Nights: The Legend of Ricky Bobby, Pursuit of Happyness and Epic Movie. They are currently completing work on Blades of Glory and Die Hard 4.