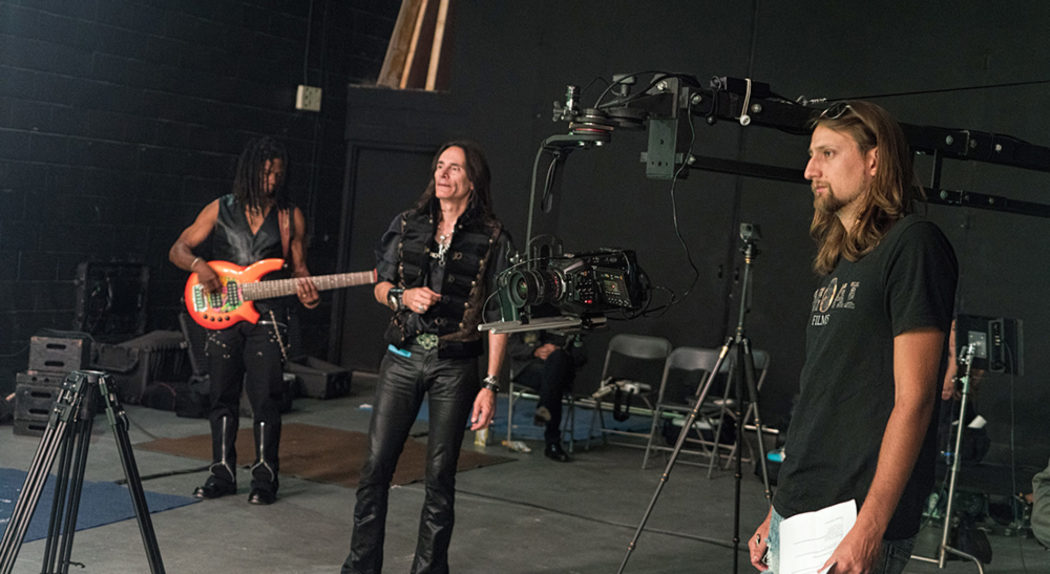 I wanted to create something that not only looked other worldly, but was also shot uniquely as well.

Long known as one of the top guitarists in rock and roll, Vai has won three Grammy Awards and worked with artists such as Frank Zappa, David Lee Roth, Whitesnake, Ozzy Osbourne and a myriad of others. In producing his newest music video, Vai wanted to do something special. “I wanted to create something that not only looked other worldly, but was also shot uniquely as well.”

Vai teamed with Moai Films to produce the video. Director Lukas Colombo decided the video would be shot entirely on green screen, something to which he was not accustomed. “My natural tendency is to capture all the actions and visuals in camera as much as possible,” said Colombo. “But because of time constraints with Steve, and also the diverse alien landscape concepts for the video, it made more sense to shoot this way.”

Moai Films brought in two URSA Mini Pro digital film cameras, along with building a “video village” with SmartView 4K monitors and several Video Assist 4Ks. “We chose the URSA Mini Pro as our acquisition tool of choice, and one of them lived primarily on a 20 foot jib,” said Colombo. ‘Our B camera was moving around on sticks.”

Vai wanted to capture each band member in their own unique way. “The idea that I came up with was to shoot the base player, Phillip Bynoe, playing to the track, but twice as fast. So when you bring that speed down to normal, and you watch it, he’s playing in sync with the track, but his motions are slow motion, so to speak,” said Vai. “For the drummer we did the opposite. The idea was to shoot him very slow, because drummers are very dynamic, especially Jeremy Colson. When you bring that up to speed it looks like he’s in sync with the track but the actions just look like there’s something interesting and bizarre about them, that just doesn’t look normal.”

For Vai, he chose the most complex solution; he decided he should play his track backwards. “I had to actually learn the song backwards on the guitar,” said Vai. “This is a daunting task because it’s never the way you think it is. You have to completely mirror your perspective because everything is backwards. So when you strum, the tendency is to strum down but that comes out looking like an up strum. There are all these little complexities, which is a fun challenge, but it’s almost like wearing a straight jacket and trying to run a forward marathon with eyes only in the back of your head.”

The production unit used the URSA Mini Pros to shoot at several different frame rates to achieve the unnatural and unearthly movements of the band members. Vai focused on not only reversing his own guitar playing, but also applying the same thinking to his hand and body motions. Vai and Colombo watched frequent takes back on set to make sure they were getting what they needed, but in the end, they were both pleased. “You know when you say, ‘I wonder if that’s going to work. It SHOULD work…,” said Vai, “you start picturing it, you sculpt the picture in your head and then it comes out better than you expected, and it’s like “yeah, baby!”

In post production, Moai Films brought in VFX Supervisors Bruce Jurgens and Nick Torres to help guide the design. The concept of the video was to place the band members in a variety of alien worlds using a combination of multi planar matte painting and effects within the Fusion page of Resolve. Torres appreciated the node based layout of Fusion. “The node workflow gave us the maximum flexibility to manipulate footage. Unlike a more layer based approach, nodes are non destructive and allow for many more possibilities, and a much more efficient workflow.”

Jurgens, a veteran Supervisor from Legion Entertainment, was responsible for the extensive matte painting work, as well as the execution of the “Ice World” in the video. Together with matte painter Juliana Arrietty, they were able to plug the work directly into Fusion composites. “Maintaining a consistent look was key,” said Jurgens. “Resolve 15 came through with flying colors, if you’ll pardon the pun.” The team was able to preview color grades directly through Resolve before the composite, helping maintain an integrated look.

The VFX team combined 2D and 3D elements to create the unique environments. “We wanted to have a completely alien environment,” said Torres, “with tall spires as mountains and a glassy still ocean with a fast rolling fog on top.” Arrietty’s 2D elements were brought into Fusion for manipulation utilizing the 3D compositing tools in Resolve. From there it was easy to see shots within the edit, due to Resolve’s all in one design. “The workflow makes my job easier,” said Colombo. “I don’t have to manage files across so many applications and worry about transcoding or consolidation. It just works the way you would expect. It takes the dynamic linking feature from other applications to a whole new level!”

Torres particularly enjoyed the keying and matte tools in Resolve. “There was extensive cleanup that was required. Essentially we created mattes with multiple UltraKeys masked together and each adjusted for their respective problematic areas. Hair, for example, for both Steve and bassist Philip Bynoe, had to have their own instances of fine tuning to keep all the detail. A lot of roto was needed for Jeremy Colson’s drums, cleaning up all the chrome on the drum kit. There were quite a few shots with a lot of motion blur from the band. Luckily with the nodes in Fusion, we could simply copy polygon masks and effects from one shot to another.”

Vai also sees the value of such a collaborative tool. “I’m always futzing around with the editing of my videos, and having to export and tweak footage in various programs is time consuming and cumbersome. But to have all these advanced tools all under one roof is the way of the future.”

The final product is not only an amazing vision of creativity, but also a testament to collaboration, both as a team and with DaVinci Resolve 15. “We came from another editing package, but the switch over to Resolve was painless,” said Colombo. “And now with Fusion incorporated into Resolve, we could live almost exclusively inside the walls of Resolve 15. The software is already the standard for color in the industry, and I expect it to become the standard for editing, sound and visual effects over the next few years, where all projects are going through Resolve and staying in Resolve. I don’t see why not. Everything you need is there.”