The two spots linked by a ‘Strong Performance’ tagline couldn’t be more different. While the Summer spot follows a female biker skillfully taking on rigorous forest jumps and trails, the Winter spot, ‘Olympia,’ follows an alpine snowboarder risking life and limb on free ride slopes and jumping gaps on Alpine mountaintops. However, both are shot with the cinematic quality and epic scale that has become the hallmark of The Directors Duo, Benjamin Kratzin and Christopher Schlierf. 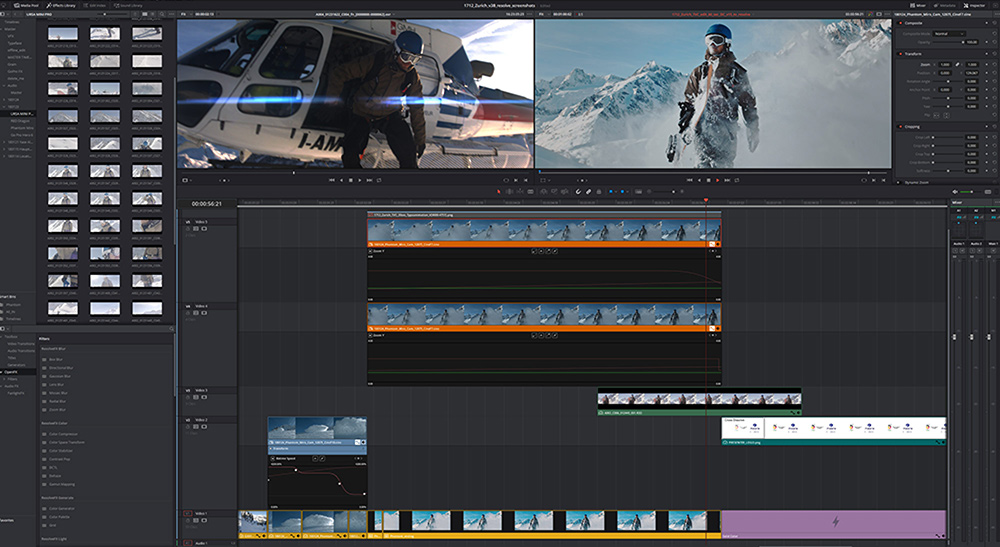 Kratzin Schlierf took on all the DP and directing duties for the commercials from Zurich’s agency Butter and production company Fireapple. Shooting the Winter spot entailed big, wide shots with a helicopter and drones as well as tightly framed shots, with the duo staying very close to the action, jumping with a snowboarder and trying to be as close as possible with all the cameras.

“We went up there with the URSA Mini Pro and chose anamorphic lenses for a great visual look. Using it on a DJI Ronin 2 on an Easyrig gimbal we could attach it to our body and ski down the free ride slopes,” explained Christopher Schlierf. “What is great about the URSA Mini Pro is that the system is so scalable.”

“Zurich was so happy with our Winter spot that they subsequently asked us for a much smaller project for the Summer season about mountain biking,” said Schlierf.

Kratzin Schlierf decided to complete picture and audio post on the spot through DaVinci Resolve 15 Studio. “We were able to quickly move the focus of the project between the different tabs from Edit to Color to Deliver, eliminating the need for conforms or round tripping. You’ve got everything in one package.”

“The creative opportunities within version 15 are on another level altogether,” according to Kratzin. “Features such as the stackable and tabbed timelines in Edit means you have a solid all round platform to cut on alongside some powerful tools for color, VFX and audio.”

The interactive timelines in the Edit pages makes the cutting fluid

“Its entire interface feels very modern,” he adds. “The interactive timelines in the Edit pages makes the cutting fluid. Simple touches such as how the trimming tools change depending on where you place the mouse in your timeline, for example, make a big difference.”

With the grade complete, Kratzin imported his entire sound design library into DaVinci Resolve where he designed and mixed the audio using Fairlight, which was a first.

“We then normalized the levels and only at the final stage of the TVC version did we export to Orange Sound Studio’s in Munich for the final legal mix,” concluded Kratzin. “While the integration of Fairlight is still a relatively new addition to Resolve, it’s already a pretty impressive addition to what is an amazing set of creative tools.”