All the Colors. See the Colors. Feel the Colors… on a kaleidoscopic audiovisual voyage with Beck as your guide. Available exclusively at Apple Music.

“Colors” is the dazzling new video directed by Edgar Wright (Baby Driver, The Cornetto Trilogy, Scott Pilgrim vs. The World), that brings the title track of Beck’s current album to vivid multi-hued life, aided and abetted by kinetic choreography by Ryan Heffington. Beck and Wright’s collaboration on the “Colors” video has resulted in something completely alien yet strangely familiar, as if an extraterrestrial culture had accidentally intercepted a transmission of a Busby Berkeley film—and chosen to create their own sequel. 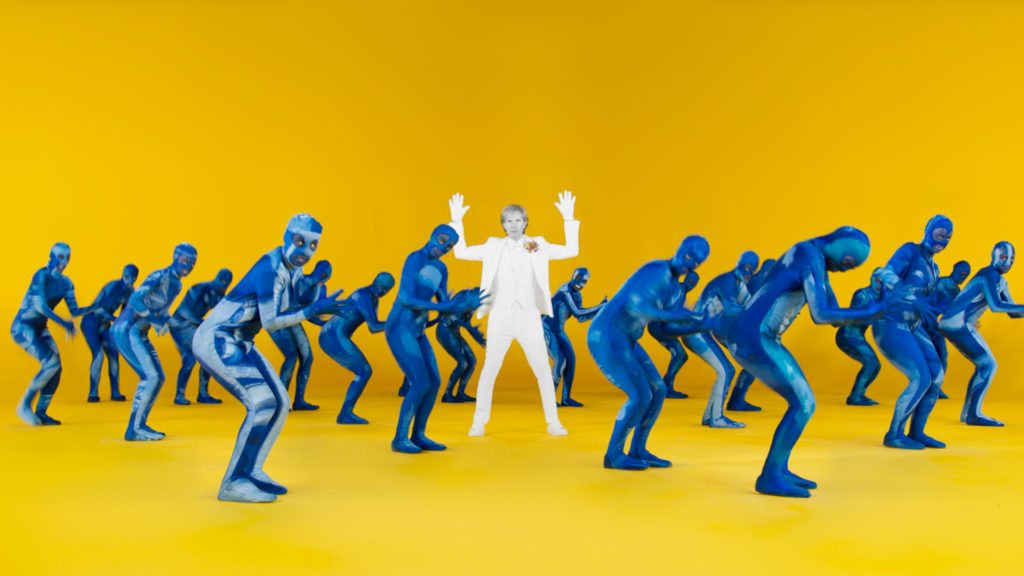 “Colors” is both the namesake and mission statement of Beck’s 13th album (and sixth to crack the U.S. Top 10), released October 13, 2017 by Capitol Records (and streamed 212 million times since). Following up 2015 GRAMMY Album of the Year winner Morning Phase and featuring “Dreams,” “Wow,” “Dear Life” and “Up All Night” (Beck’s third Billboard Alternative #1), Colors has been hailed as “yet another milestone” (WALL STREET JOURNAL),  “a euphoric blast” (USA TODAY) and a  “classic, sneakily inventive, massively catchy” (AV CLUB) album  “that proves that Beck is still one of rock’s most intrepid inventors” (ENTERTAINMENT WEEKLY).

“Colors” is directed by Edgar Wright and choreographed by Ryan Heffington. The video was produced by Bridgitte Pugh and executive produced by Nina Soriano for Anonymous Content with color, visual effects and design by The Mill.

The Mill is a visual effects and content creation studio collaborating on VFX, digital and design projects for the advertising, games, music and automotive industries. We partner with the world’s best agencies, groundbreaking directors, creative firms and visionary brands. We have over 28 years of insight and pride ourselves on forming partnerships built on creative excellence and cutting-edge technologies. At its center, The Mill is a creative culture of talented artists from multinational and homegrown backgrounds, nurturing innovation, flexibility and diverse ideas. This enables us to offer creative solutions across all our studios from London, New York, Los Angeles and Chicago. The Mill is consistently recognized by peers and clients for delivering outstanding work and has earned prestigious industry awards including Cannes Lions, D&ADs, Emmys, APAs, British Arrows, AICPs, CLIOs, SXSW Interactive Innovation Awards and VES statues. For more information, please visit www.themill.com.

Founded in 1999 by CEO Steve Golin, Anonymous Content is a leading management and Film, TV and Commercial production company. Anonymous Content manages the careers of many of the world’s most renowned and innovative directors, writers, actors and comedians, working closely with them to achieve their goals by both creating and finding opportunities for them, whether in feature films, television, commercials, music videos or brand integrated content. Anonymous Content’s clients have been recognized with Academy Awards®, Emmys®, Golden Globes®, Tony Awards®, Pulitzer Prizes® and other prestigious awards. The company’s award-winning Film & TV division boasts many commercially successful and critically-acclaimed works, including Academy Award-winning Best Picture SPOTLIGHT, THE REVENANT, WINTER’S BONE, BABEL, ETERNAL SUNSHINE OF THE SPOTLESS MIND, and BEING JOHN MALKOVICH. The company’s TV slate includes “The Alienist” (TNT), “Counterpart” (Starz), “Electric Dreams” (Amazon Prime) “13 Reasons Why” (Netflix), “True Detective” (HBO), and “Mr. Robot” (USA Network), as well as upcoming title “Maniac” (Netflix). Through its Commercial work, Anonymous Content is also the driving creative force behind countless top brands, including Prada, Nike and Coke. In 2016, Anonymous Content received a substantial minority investment from Emerson Collective, the organization founded and run by Laurene Powell Jobs, to allow the firm to expand its production offerings in socially-relevant content aimed at inspiring change. For more information, visit www.anonymouscontent.com.