LONDON, ENGLAND – For UK-based artist, DJ and Producer MJ Cole, his most recent single “Pictures In My Head” represents “essentially the dreams and imaginations of a girl wrapped in romance.” Visually representing such a broad scenario fell to the talented hands of Director/Designer Nik Hill, who directed the mind-bending 3D animated music video.

A lot of the lyrics in the song are about love and sex. I was trying to play with those ideas, but do it in a way that’s not crude

“I was trying to keep it dreamy,” Hill says. “A lot of the lyrics in the song are about love and sex. I was trying to play with those ideas, but do it in a way that’s not crude. I like to hint at ideas by creating clever visual metaphors. Most important for me was to keep it fun and colorful.”

For Hill, who before venturing on his own, was Art Director at Territory Studio’s London branch where he worked on screen graphics for such blockbusters as “Guardians of the Galaxy,” “Avengers: Age Of Ultron,” and most recently the Oscar-nominated “Blade Runner 2014,” the inspiration for the “Pictures In My Head” music video sprang completely from the music itself.

Opening with contemplative piano chords, subtle guitar hook and prominent female vocal, the music shifts quickly into a steadier groove that’s offset by slightly jarring synth pads that scissor in and out, creating a disorienting musical effect that is perfect for the interior monologue quality of the lyrics.

“Sometimes a piece of music makes you see a certain thing, or a collection of things,” Hill notes. “When listening to ‘Pictures In My Head’ it instantly triggered images of a colorful world made up of random visual metaphors. The more I dissected the lyrics of the track it felt like it was all about the idea of love and the emotional experiences that go with it.” 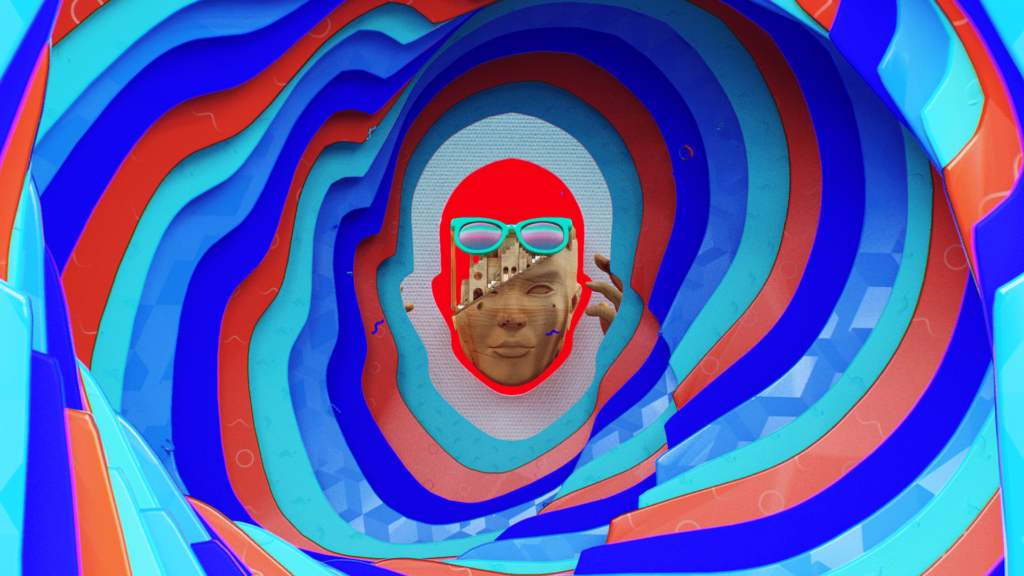 Random and dreamlike, the video opens with a random group of multi-colored rectangle shapes surrounded by various colorful squiggly lines. The rectangles begin to move in a circular pattern to reveal the video’s most striking visual: a wall-mounted wooden head split diagonally that serves as the “stage” for the surreal animated interpretations of the song’s lyrics. 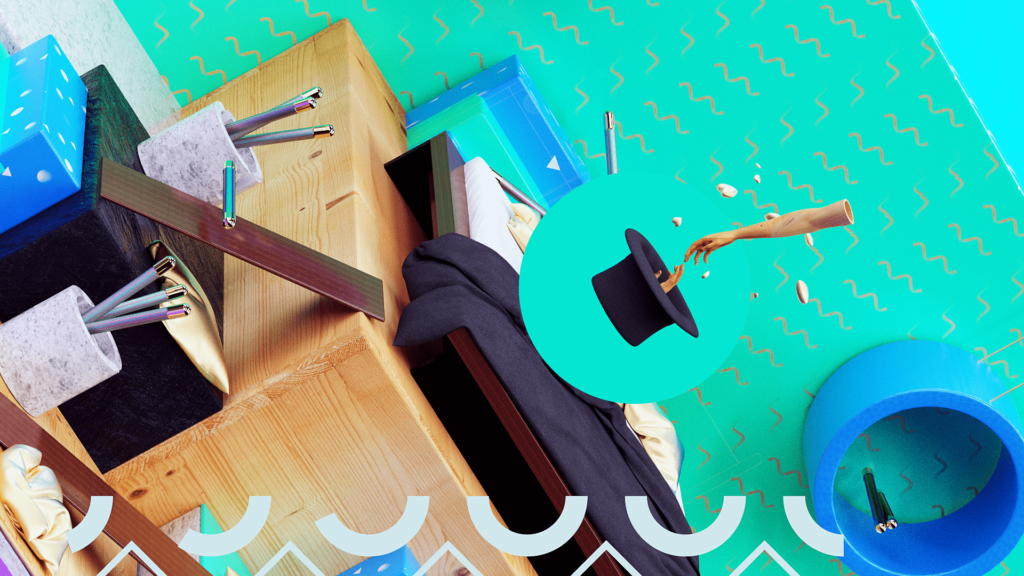 At one point the head reveals the inside of an apartment, then more specifically the bedroom, complete with numerous sexual innuendos, and an array of objects and typography that float around the space. That compelling image is followed by another recurring visual: various DJ turntables and speakers, sitting on top of a crowded desk among various books and other objects, pulsating in time while the word “you” hovers outside the room’s window.

About midway through we’re introduced to another striking visually metaphor — a diamond, cut crudely in two and held together by just a sticky, gum-like substance that is constantly separating – a subtle commentary on the delicate nature of love and beauty. 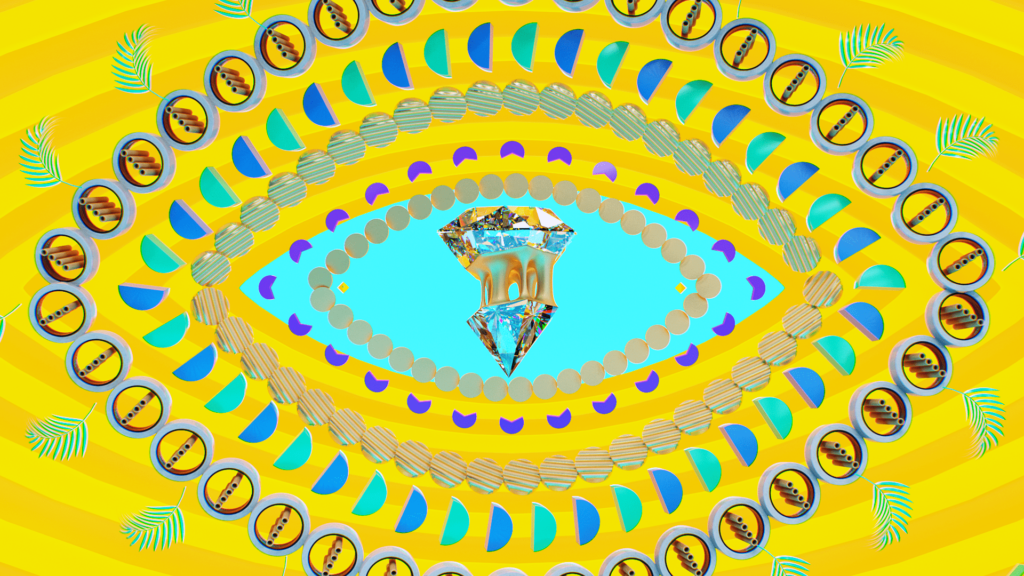 The video ends just as it began:  the wood head mounted on the wall and the colored rectangles moving in a circular pattern till it is once again completely obscured.

Given the time constraints Hill could have easily simplified the concept a great deal, or render the look in 2D, not 3D and pared down the visual detail somewhat, but he wasn’t prepared to do that. “This job was all about the creativity,” Hill says. “I knew this was a big opportunity to create a strong piece for everyone involved, so basically all the decisions made were based solely on the intention of making something truly great.”

For Hill that meant bringing in some help — namely a global team of three highly-skilled 3D artists: Adriana “Electra” Mora, the Mexico-based artist who was charged with creating a lot of the 3D environments; Lauren Galloway, a Toronto-based designer that handled the bulk of the project’s 3D modeling; and Grace Barth, a French artist who oversaw much of the 3D animation on the diamond sequences.

Despite the fact that they were never actually in the same room together, thanks to Hill’s clear communication and articulation of the concept, and a workflow that incorporated collaboration apps like Slack and Dropbox, Hill was able to keep the team on schedule and budget.

Hill described the general workflow between himself and his team as starting with 3D modeling all the digital assets and assembling the scene primarily using Maxon’s Cinema4D. From there the assets were then textured, lit and rendered using Octane Render and composited into the final sequence using Adobe After Effects. Hill used Cinema4D to create design frames, geometric rigs and key-frames, generally keeping the animation minimal so as to focus more on the flow of the edit overall.

Hill also noted as director overseeing this talented team of artists all working remotely it was important to allow for some degree of experimentation so each artist felt they bringing something unique to the project, rather than simply executing Hill’s vision.

“My style is to give them direction but leave it open somewhat to interpretation,” Hill explains. “Sometimes you might be surprised by what they give you. If you shut people down too soon, then it’s not fun for them. Artists want to feel like they’re adding value, expressing themselves through they’re work. In terms of what I’m looking for, I try to keep it quite broad in the beginning and trust my gut about whether something is working or not, and methodically work towards the final look together.” 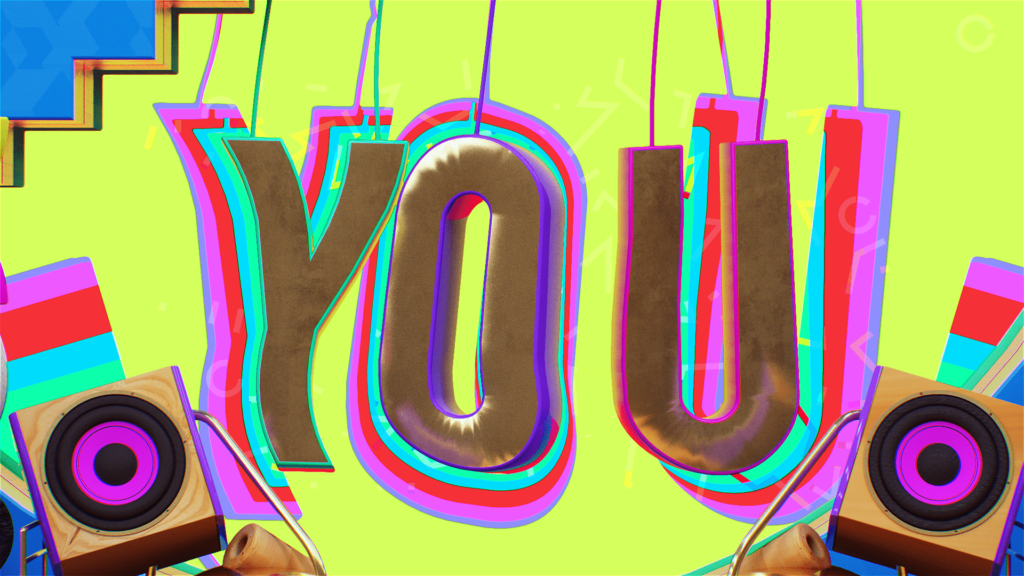 In addition to the massive amount of rendering time and he intricate lighting details, Hill points to sequence with the pulsating DJ turntables and speakers with the word “you” hanging from the window as one of the most creatively challenging.

“The first iterations were not feeling vibrant enough, so made several revisions,” Hill notes. “Conceptually, the theme of the video is the word ‘you’ — it’s part of the chorus and you hear that word a lot in the lyrics. Because of that it took a bit of back and forth to get the right kind of look so that it felt quirky and more upbeat than the rest of the song.”

Growing up in Bristol, England, Nik Hill has always expressed himself visually. Exposed to vivid street art by the likes of Banksy, TCF Crew and Will Barras, Hill went on to study Motion Graphics at London Met. Following graduation he began a freelance career that would lead him to the London design studio Territory where as Art Director he worked on a number of major feature films, including Marvel’s Avengers: Age of Ultron, Guardians of the Galaxy, Jupiter Ascending and Agent 47. After 4 years there he struck out on his own where in addition to designing for film, TV and online content, he also creates one-of-a-kind, gender neutral art and jewellery and lifestyle accessories with the primary focus of creating conscious products and experiences.