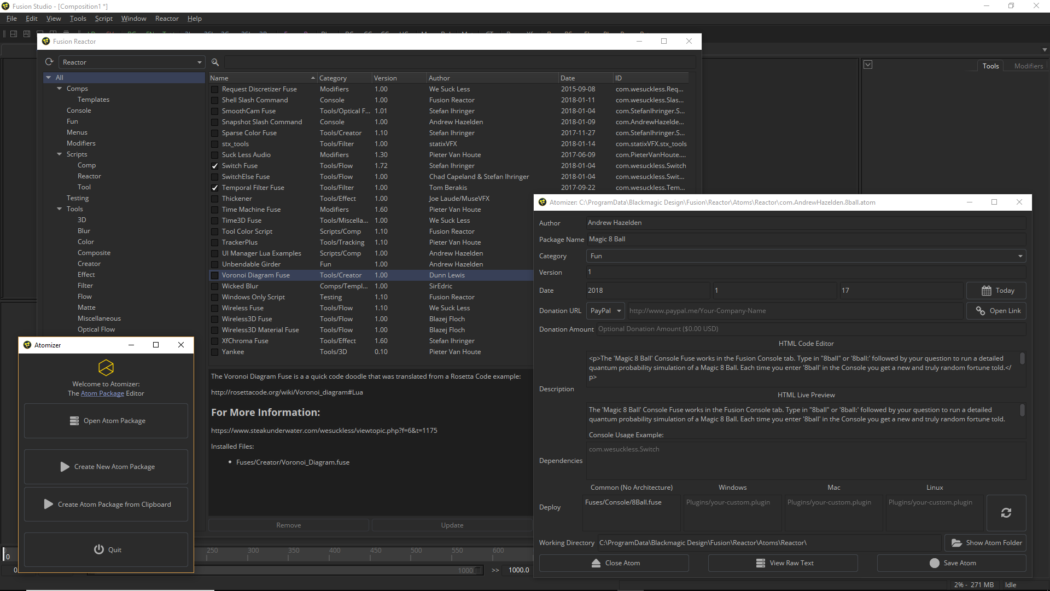 Created by the We Suck Less Fusion community (WSL), Reactor is a free and open source package manager for Fusion (Free) and Fusion Studio. Reactor streamlines the installation, distribution and management of 3rd party content for Fusion through the use of “Atom” packages that are synced with an online Git repository. With Reactor, third party Fusion content such as Scripts and Plugins can be installed with a click of a button, rather than having to manually download, copy and edit individual files.

Our customers are the core of Blackmagic Design, so we’re very excited that the VFX community at We Suck Less came together and created something they’re impassioned about as Fusion users

“I’m very proud!” says Pieter Van Houte, Compositing Supervisor and Founder of the We Suck Less forums. “These ideas have been floating around the Fusion community for a long time, but recently bits of actual code started to surface, and they’ve finally been picked up and shaped into an actual product. Andrew [Hazelden] acted as the catalyst to get Reactor out of the door, and the end product with included content are very much a community effort. Reactor also serves as an excellent incentive for people who want to expand Fusion’s functionality and share it with the community, get valuable and almost immediate feedback on the online forums and polish their tools so they can be used effectively by as many people as possible. As an end user, ingesting and testing tools is now a single mouse click away. It’s just terrific how easy and quick this is to use.”

“Part of the magic of Reactor is that it helps build out a larger ecosystem for Fusion users by supporting open source developers financially with the addition of a payment system.” adds Reactor core developer and WSL moderator Andrew Hazelden. “The Reactor atom package format enables creators to set a fair price for their tools and be paid the way they want.”

Eric Westphal, Fusion veteran and previously a member of the Fusion development team, is equally excited: “This is definitely one tool the community deserves and has been waiting for. The Marketplace Of Awesome built directly into Fusion. Finally artists can not only easily share their work, but even suggest donations to potentially get some bucks in reward for their brilliant contributions. Loads of thanks to all the ingenious people who have been working hard in their spare time to make this happen. Fusion rocks. And so does the community. Amen.”

“Finally, a collection of tools, macros, fuses and scripts that every Compositor or Motion Designer needs. Reactor makes it easy to manage all those tools. You will always have the latest version on all platforms.” – Dunn Lewis, Motion Graphics Designer

Highlights of available content in Reactor’s initial release include the Fusion Cryptomatte implementation by Cédric Duriau and Kristof Indeherberge, the Krokodove plugins from Komkom Doorn, and the actual Fusion 3D water setup as it was used on Roland Emmerich’s Anonymous, courtesy of Uncharted Territory.

“Our customers are the core of Blackmagic Design, so we’re very excited that the VFX community at We Suck Less came together and created something they’re impassioned about as Fusion users,” said Dan May, President, Blackmagic Design. “Our customers are the ones on the front lines using Fusion every day, so it’s wonderful to see this type of innovation and collaboration from the Fusion community.”

Reactor also comes with the Atomizer Package Editor, which greatly facilitates editing existing atom packages and creating new packages from scratch. This will make sharing new and existing content through Reactor a breeze.

Sander de Regt, screenwriter and visual effects artist, had this to say: “For over twenty years, Fusion has always been about its users. The release of Reactor proves that this is still the case. At its core, Reactor makes all sorts of user *and vendor* content like settings, macros, fuses and plug-ins accessible from a unified hub. That makes installing and maintaining all these elements possible without having to scour the interwebs. Like Fusion, Reactor can do great things out of the box, but its strength lies in the way it can be extended through the use of Atoms to expand and reach dizzying new heights.”

Reactor and install instructions are immediately available to download from We Suck Less, with the public content repository hosted on GitLab.

About We Suck Less

Founded in the summer of 2014, We Suck Less is the friendliest Fusion Studio user community online. Counting a large pool of active users and thousands of helpful community posts, WSL is the leading source of high quality Fusion content on the web.