As IBC 2017 kicks off in Amsterdam, a slew of industry product announcements hit the streets. Top of my list are the Adobe Creative Cloud features announced for Adobe’s video and audio technologies. There are slew of new features…making this one of their biggest release in years. It’s easy to find an exhaustive list of these new features online, so instead, I’d like to focus on the ones that I’ve put to use specifically for my workflow: video editing and creating motion graphics for motion.tv and our annual un-conference, motion. 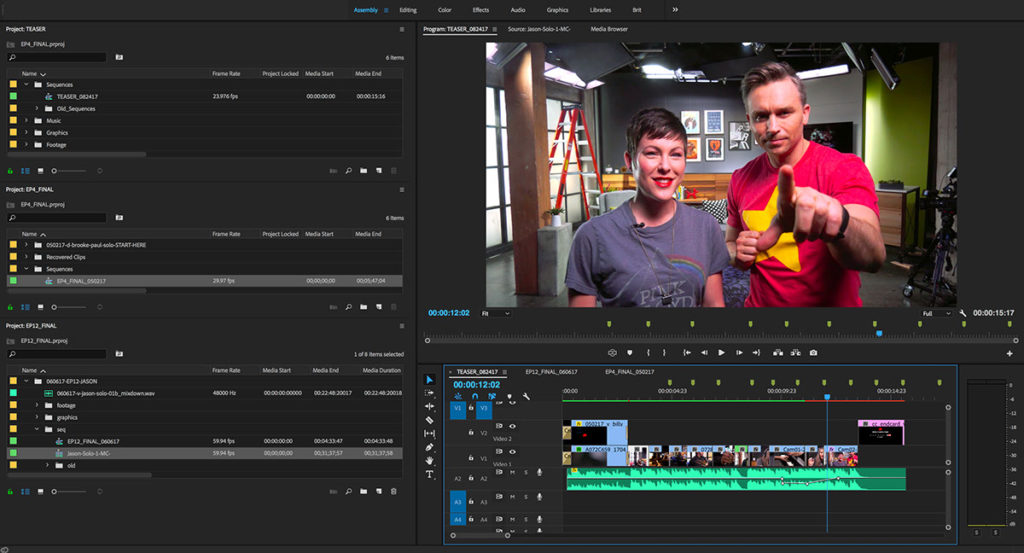 Another feature at the top of my favorites list is Project Locking. We have a server where our assets are stored. Each of us can access the server from our workstations to work on a project in Premiere. So let’s say I opened a Premiere project file to work on, the new project locking feature will alert others that the project is currently being edited so my work doesn’t get overwritten. And if I don’t want to allow anyone else to edit a project I’m working on, I can easily assign read-only access that allows other to view the project, but not edit it.

We have standard Adobe Creative Cloud licenses, but for those of you who have Creative Cloud for teams in your work environment, there are even more new features with this release including Cloud-based Collaboration. Definitely something you’ll want to checkout.

Let’s move on to titling and lower thirds that I create directly in Premiere. Last Spring, Adobe introduced the Essential Graphics panel and Motion Graphics templates. This release takes it a step further including new features like responsive design, the ability to manipulate multiple graphic layers, and motion graphics templates now offered in Adobe Stock. Since I create most of our own motion graphics in After Effects, the two features I want to touch on are responsive design and manipulating graphic layers. The second is pretty straightforward: Yes. You now have the ability to select and manipulate multiple graphic layers simultaneously in both the program monitor and Essential Graphics panel. Simple – and I love it. Responsive design is a bit more complex to understand. The Essential Graphics panel in Premiere Pro now includes time and position based controls ensuring your motion graphics respond intelligently to changes in duration, aspect ratio, and frame size. For example, I can easily preserve the integrity of my intro, so that it’s not affected by changes I make to the overall clip duration. So let’s say I have motion graphic title that overlays a 5 second video clip in each episode. The title appears on screen letter by letter, ultimately revealing the the title of the episode. Now, with the responsive design feature, if I have a title that is 15 characters in length in episode one, and 24 characters in length in episode two, by setting the responsive design parameters, I don’t have to worry about the title exceeding the underlying 5 second video clip length. One less thing to spend time on!

If you don’t create your own motion graphics in After Effects, be sure to check out the motion graphics templates now being offered in Adobe Stock. They’re sure to save you a substantial amount of time, and take your project to the next level.

Which brings me to After Effects. If you’re like me and enjoy creating your own motion graphics, titles, lower thirds and end credits in After Effects, you can now sell Motion Graphic templates for Premiere Pro through Adobe Stock. There are some specific requirements for the templates, but if this is of interest to you, be sure to email amograph@ adobe.com for details. 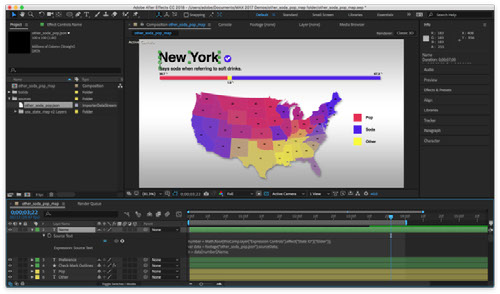 While this really isn’t related to my workflow for motion, one of my favorite new features in After Effects is Data Driven Animations. For my fellow right-down-the-middle-left-brain-right-brain associates…you too will love this feature. You can now import JSON data files (yup, just like web…) to automate the creation of charts and graphics. It’s all part of the new data layer type. Then, use the pick-whip in After Effects to easily link parameters in your comp with the data values, and After Effects will handle the interpolation automatically. Geek out! 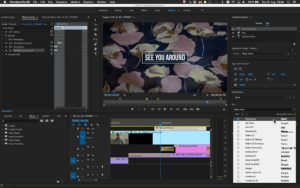 Also, you now have mega control over your graphics in After Effects with the ability to create powerful expressions for shape layers, Bezier path points on masks, and even paint brush strokes!

Plus, in both After Effects and Premiere, Adobe has added the font panel I’ve been waiting for!

And…did I mention that the lite version of MAXON C4D’s latest R19 release is included with the new After Effects?

I know. You want to stop reading, and go download the latest Creative Cloud video tools now. But before you do, I have one last thing I’d like to touch on – something that is just what I needed for my specific workflow: auto-ducking in Adobe Audition! This feature automatically lowers the volume of music when dialogue and other sounds are audible. This feature alone will save me hours of time!

There’s a whole lot more in the latest Creative Cloud video release. If you’re working in immersive VR, there’s enough to write an entire book. And Adobe Character Animator is now officially out of beta, so be sure to check it out. It’s a lot of fun! Create a character in Illustrator or Photoshop, and then bring it to life by acting out your movements and recording your voice using your webcam and microphone. Complete with roundtrip audio editing support using Adobe Audition.

Grab the latest Creative Cloud releases. Then get ready to spend the rest of your day…playing with your new toys.