Incredible new VR tools, planar tracking, state of the art keying and more, along with a new low price of only $299 for Fusion 9 Studio!

Fusion 9 is a massive new release with a VR toolset that makes it indispensable for virtual reality projects. Customers get a full 360º true 3D workspace, along with a new panoramic viewer and support for popular VR headsets such as Oculus Rift and HTC Vive. Working in VR with Fusion is completely interactive. GPU acceleration makes it extremely fast so customers can wear a headset and interact with elements in a VR scene in real time. Fusion 9 also supports stereoscopic VR. In addition, the new 360º spherical camera renders out complete VR scenes, all in a single pass and without the need for complex camera rigs. 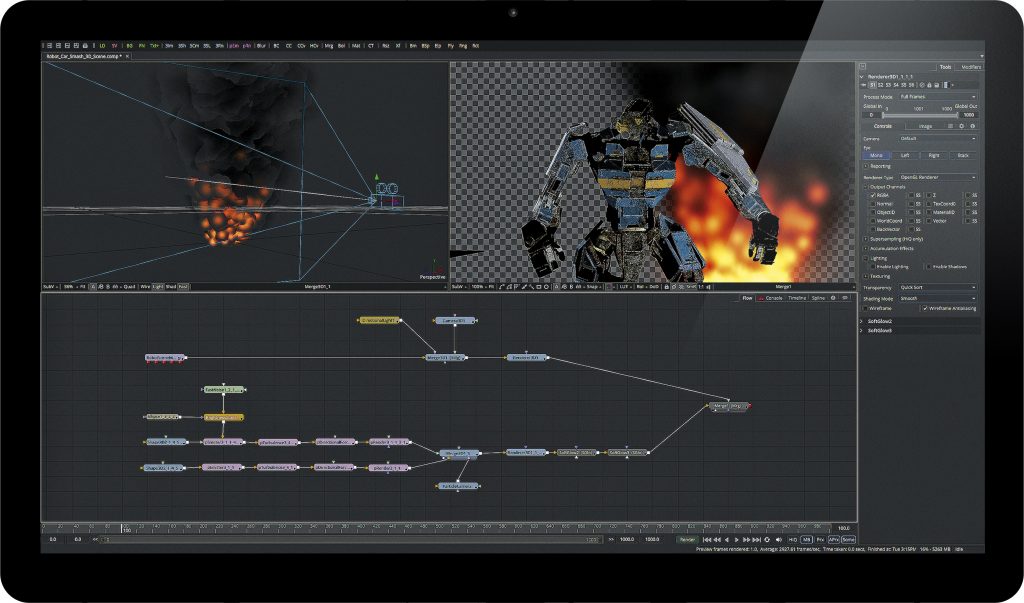 The new planar tracker in Fusion 9 calculates motion planes for accurately compositing elements onto moving objects in a scene. For example, the new planar tracker can be used to replace signs or other flat objects as they move through a scene. Planar tracking data can also be used on rotoscope shapes. That means customers don’t have to manually animate motion, perspective, position, scale or rotation of rotoscoped elements as the image changes.

Fusion 9 also features an entirely new camera tracker that analyzes the motion of a live action camera in a scene and reconstructs the identical motion path in 3D space for use with cameras inside of Fusion. This lets customers composite elements with precisely matched movement and perspective of the original. Fusion will auto analyse the shot and calculate lens focal length and lens distortion.

For multi user collaboration, Fusion 9 Studio includes Studio Player, a new application that features a playlist, storyboard and timeline for playing back shots. Studio Player can track version history, display annotation notes, has support for LUTs and more. The new Studio Player can output via Blackmagic DeckLink and UltraStudio devices, making it perfect for customers that need to see shots in a suite or theater for review and approval. Remote synchronization lets customers around the world synchronize Studio Players in multiple locations. In addition, Fusion 9 features a bin server so shared assets and tools don’t have to be copied onto each artist’s local workstation.

Fusion 9 Studio also gives customers unlimited network rendering. This means that large studios working on complex shots and high end visual effects heavy feature films no longer have to pay a license fee for each render node. Customers simply purchase and install Fusion 9 Studio on all of their artist workstations and then install it on as many render nodes as they need, without any additional charges or ongoing maintenance costs.

In addition to all of the new features, Fusion 9 has more GPU and OpenCL acceleration, making it faster than ever. Fusion 9 also works with additional formats and file types such as DNxHR, MXF and more. This makes it suitable for use in an even broader range of workflows and provides seamless integration with DaVinci Resolve files.

Blackmagic Design also announced a price reduction for Fusion Studio from $995 to only $299. It costs less than most annual cloud based subscription plans, making Fusion more affordable than ever before. This new low price makes it easier for DaVinci Resolve users to add Fusion Studio to their suites and get incredible keying, paint, compositing, tracking, motion graphics, titling and more.

Because Fusion does not require a subscription or a connection to the cloud, customers don’t have to worry about it being automatically updated in the middle of a job. Customers can upgrade when they wish, such as after the completion of a major job. In addition, Fusion systems don’t have to be connected to the internet, so they can be isolated to eliminate the possibility of hacking. Customers also don’t have to pay monthly, so once Fusion is purchased it will keep working until customers choose to upgrade in the future.

“Fusion is an incredibly rich and powerful tool that Hollywood’s top visual effects and motion graphics artists have been using for years,” said Grant Petty, Blackmagic Design CEO. “Fusion 9 adds the new features and tools customers have been asking for, supports more formats and newer workflows than ever before, has even more GPU and OpenCL acceleration, and a new dramatically lower price! This makes Fusion even more accessible than ever before. Plus, the new collaboration tools and free unlimited network rendering will change the way large studios work!”