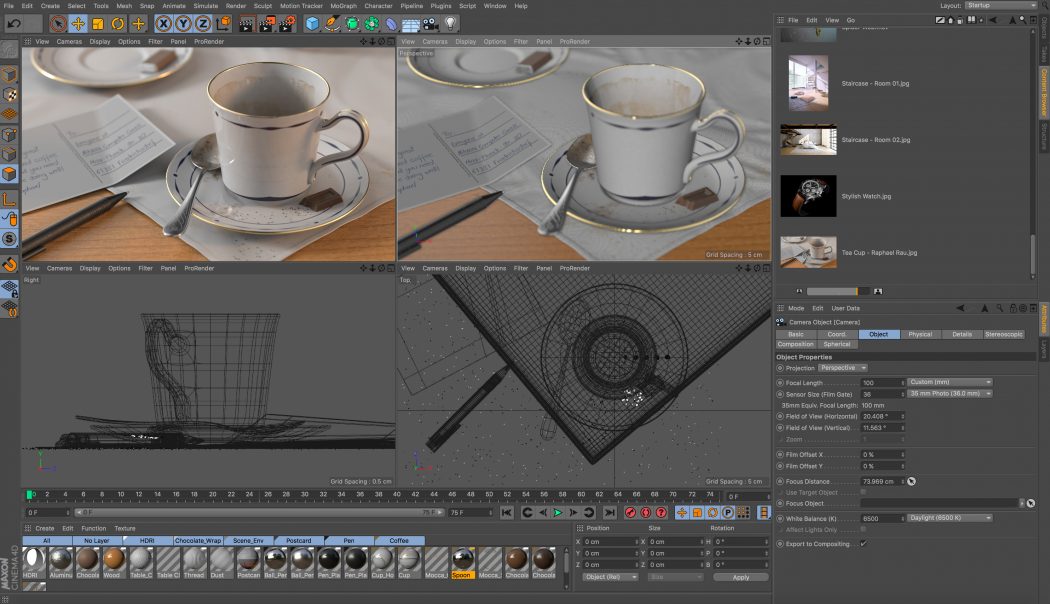 Ahead of the SIGGRAPH 2017 conference, MAXON today announced Cinema 4D Release 19 (R19). This next generation of MAXON’s professional 3D application delivers both great tools and enhancements artists can put to use immediately and provides a peek into the foundations for the future. Powerful developments have been made to viewport performance, a new Sound Effector and additional features for Voronoi Fracturing have been added to the MoGraph toolset, a new Spherical Camera introduced, the integration of AMD’s ProRender technology and more. Designed to serve individual artists as well as large studio environments, Release 19 offers a fast, easy, stable and streamlined workflow to meet today’s challenges in the content creation markets; especially general design, motion graphics, VFX, VR/AR and all types of visualization. MAXON will debut Cinema 4D R19 at SIGGRAPH 2017 July 30 – August 3, in Los Angeles, Booth #701.

With Cinema 4D Release 19, MAXON also introduces a number of re-engineered foundational technologies, which the company will continue to develop and bring to maturity in future versions. These include core software modernization efforts, a new modeling core, deeply-integrated GPU Rendering for Windows and Mac, and OpenGL capabilities in BodyPaint 3D, MAXON’s professional paint and texturing toolset.

“For more than two decades MAXON has been dedicated to delivering 3D graphics solutions with rock-solid stability, outstanding ease-of-use, a fast workflow, and cross platform capability,“ says Harald Egel, managing partner at MAXON Computer GmbH. “Cinema 4D Release 19 expands on those core values with outstanding new features and a first look at foundations for the future.”

The new highlights in Cinema 4D Release 19 include:

Viewport Improvements – provide artists with added support for screen-space reflections and OpenGL depth-of-field in addition to the screen-space ambient occlusion and tessellation features (added in R18). Results are so close to final render that client previews can be output using the new native MP4 video support.

AMD’s Radeon ProRender – technology is now seamlessly integrated into R19 providing artists a cross-platform GPU rendering solution. Though just the first phase of integration, it provides a useful glimpse into the power ProRender will eventually provide as more features and deeper Cinema 4D integration is added in future releases.

Robust Modeling – a new modeling core with improved support for edges and N-gons can be seen in the Align and Reverse Normals commands. More modeling tools and generators will directly use this new core in future versions.