A play, puppet show, concert and film all in one, “Nufonia Must Fall” is the brainchild of Eric San, better known as Montreal-based turntablist and producer Kid Koala, and it is based on his black and white graphic novel of the same name. The dreamy performance is directed by K.K. Barrett who is known for cinematic feats “Her,” “Lost in Translation,” “Where the Wild Things Are” and “Being John Malkovich.” 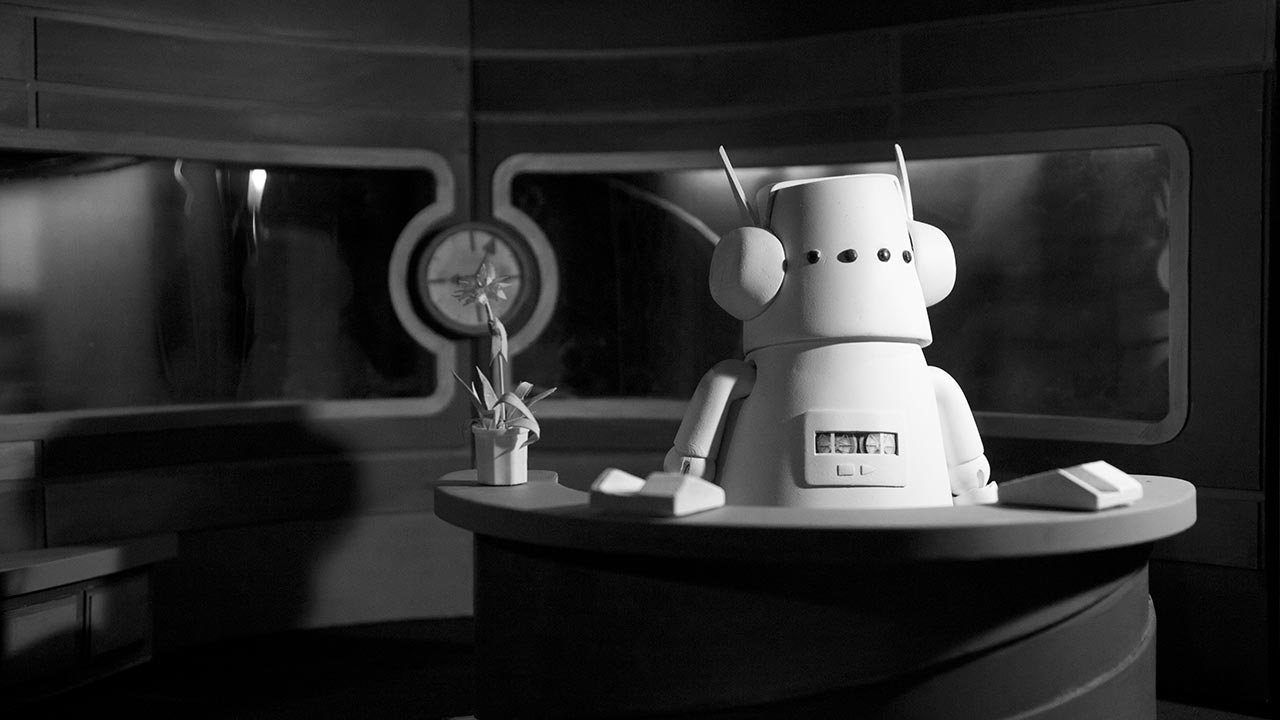 Orchestrating the storyline through 40 puppets and 20 miniature sets, the live action puppeteering takes place on stage in front of the audience. Because the puppets and sets are so small, the performance is shot, live cut into a film and projected in real time onto a large screen above the stage using a multi camera setup comprised of four Pocket Cinema Cameras and an ATEM Production Studio 4K.

“When we first began conceptualizing ‘Nufonia Must Fall,’ we decided to create a live film that would take place, in one take, in front of an audience using multiple cameras,” explains San. “After testing a few different camera options, it was clear that the Pocket Cinema Camera was the only one for the job.” 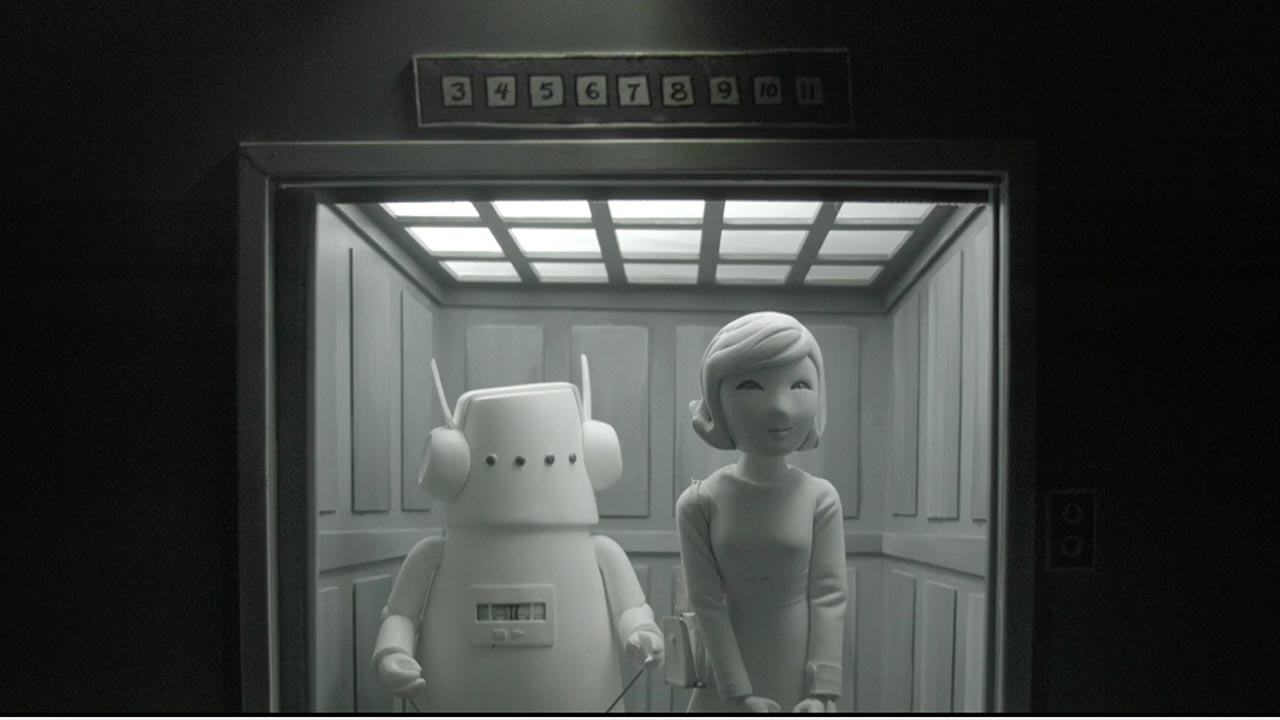 The Pocket Cinema Cameras lent particularly well to creating a filmic look that could be produced live. Director of Cinematography AJ Korkidakis comments, “When we were making decisions on gear for the show, we were trying to select equipment that would give us a very cinematic look. When you’re doing live video, a lot of the gear that’s meant for live video switching or live shooting has more of a documentary feel. The Pocket Cinema Cameras had a nice, shallow depth of field and were reminiscent of 16 millimeter film, really giving us the look that we were going for, without compromising.”

Not only did the Pocket Cinema Cameras enable the “Nufonia Must Fall” crew to achieve a very specific, high quality look, but the form factor was truly ideal for filming so many small scale sets. Because the cameras are light and compact, the production crew could easily mount them on jibs and dollies for quick and dynamic shots. Korkidakis reports, “Because of all the cinematic things we can do with the cameras, we’re able to create exterior establishing shots and flyover shots as if there is a helicopter flying over the scene.”

It was really key having a compact camera that could do so well working with small LEDs, which was crucial to our setup,

The cameras’ size and ease of use also enabled a straightforward setup, reducing the number of people needed to control the cameras and thus, the number of people on stage, which was especially necessary for the production. Korkidakis says, “We built the cameras up on rails with focus gears so we can pull focus during the show. It’s a great camera because it’s super flexible. On stage, I can operate it by myself, so I’m moving it on the dolly and pulling focus and framing, whereas usually you would have multiple people doing that. But these cameras allow us to be flexible enough that I can just do it myself.” 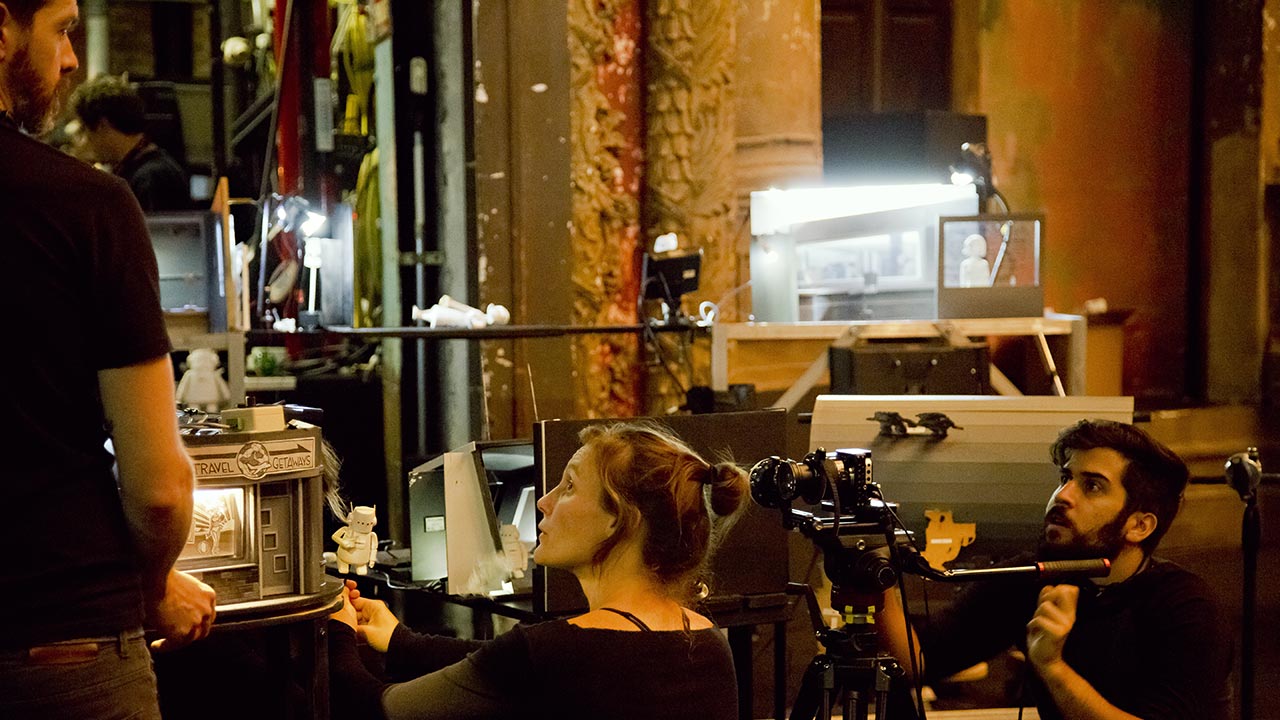 With an aesthetic based on that of the original graphic novel, which was inspired by early Charlie Chaplin films, “Nufonia Must Fall” (the play), needed to evoke a black and white film noir look. To achieve this look without losing the drama that comes with shooting in color, and rather than shooting in black and white, the sets and puppets were painted in grayscale, while subtle to dramatic lighting effects are coordinated on the sets. Because they’re scaled down, the crew uses small LED lights that won’t look too bright on stage.

“It was really key having a compact camera that could do so well working with small LEDs, which was crucial to our setup,” states Korkidakis. “When you’re watching the show, if the camera required a massive amount of light to have a nice image, it would distract from the main screen. We’re using an MFT lens and shooting at the camera’s highest ISO of 1600, and it responds really well to that. The Pocket Cinema Cameras are little beasts.”

When it came to switching between angles and scenes, the ATEM Production Studio 4K was the brains of the operation. Oftentimes, the stage crew and puppeteers are running around on stage, especially when cutting within a scene, back and forth between cameras to get exteriors and close ups, or to create a montage. San comments, “It’s a lot more dynamic than just letting things play out in front of the camera, and it’s all cut live through the ATEM.”

Korkidakis elaborates, “If you were to do this for a film, you would shoot it all and then spend a week editing it together. We do it right on the spot and can do transitional effects like crossfades and hard cuts, depending on what’s funnier or what has more impact for that sequence. Without the ATEM, we wouldn’t be able to do this show, especially at the level that we want.”

Not only did the ATEM facilitate live cuts between the Pocket Cinema Cameras, but it enabled the production to stream the live camera feed to preview monitors stationed underneath the sets, so puppeteers can watch the play of action and prepare for cues without taking their attention too far away from the puppets they’re orchestrating. The crew also experimented with using subtitles for non English speaking audiences in Shanghai, throwing them on an overlay through the ATEM, and they did the same for shows in Antofagasta and Santiago, Chile.

After two years on the road visiting countries on just about every continent, including Canada, the US, Germany, the Netherlands, Australia, China and Chile, “Nufonia Must Fall” is continuing its journey around the globe, making stops in additional US cities and Abu Dhabi. Visit the Kid Koala website for more info and upcoming dates.

About “Nufonia Must Fall”

She’s a lonely office girl. He’s an out-of-work robot struggling to find his voice amidst the noise of the city. Little do they know that destiny has programmed them for the greatest love story of our time.

Equal parts cinema, theatre, musical concert – watch an amazing team of puppeteers bring the characters of Kid Koala’s graphic novel “Nufonia Must Fall” to life in miniature sets built to recreate each scene from the book. Under the direction of renowned production designer KK Barrett (Her, Where the Wild Things Are, Adaptation, Being John Malkovich), the performance is cinematically lit, filmed, and projected on a large screen. Kid Koala, accompanied by Afiara Quartet, performs his original score on piano and turntable. All of these components come together in real time thanks to a team of twelve talented performers and technicians.