CHICAGO – (February 15, 2107) The newly opened 150 North Riverside Plaza has unveiled the 150 Media Stream, a digital art installation unlike anything in the United States.

150 Media Stream has been created as a hybrid partnership between leading corporations, cultural and educational institutions, and both emerging and established visual artists,

Commissioned by Riverside and curated by Creative Director Yuge Zhou, 150 Media Stream’s display concept and physical structure were designed by McCann Systems in cooperation with media firm Digital Kitchen. McCann Systems then led the design-build process, with specialized creative agency Leviathan engaged to produce the initial artistic content. The massive 3,000+ square foot canvas is comprised of 89 individual vertical LED displays of various heights (some higher than 20 feet) and widths – as well as integration of negative space between each blade. Altogether, the interactive installation – which responds to external factors like time of day, weather, the lobby’s activity level, special events and tenant considerations – will easily constitute Chicago’s largest video wall, while also providing exciting and future-forward exhibition opportunities for artists. 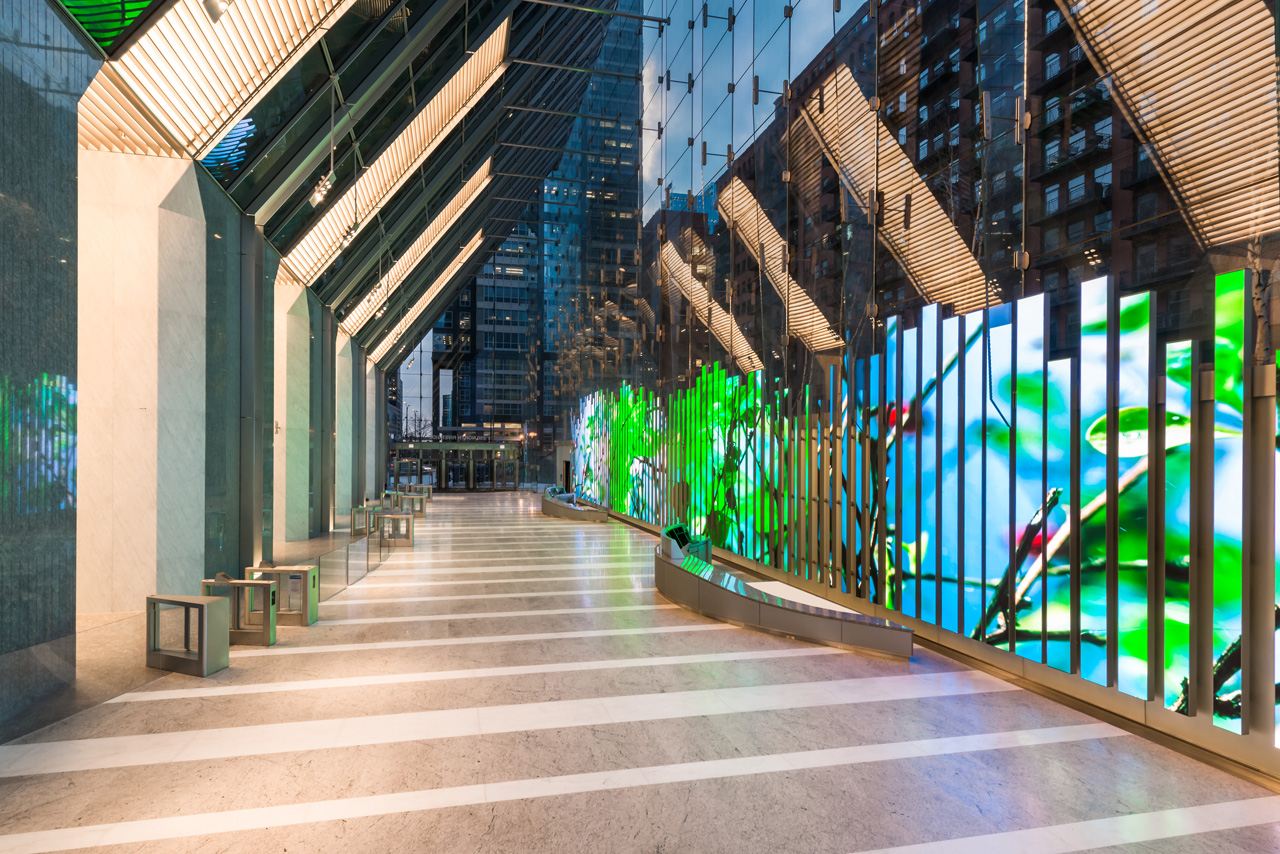 A key component of 150 Media Stream is the creative and advisory partnerships developed with the School of the Art Institute of Chicago, the Chicago History Museum, University of Illinois at Chicago, Electronic Visualization Laboratory, Hyde Park Art Center, the University of Chicago, and various international experts in urban media art.

“150 Media Stream has been created as a hybrid partnership between leading corporations, cultural and educational institutions, and both emerging and established visual artists,” explained Anthony Scacco, Executive Vice President for RID. “This partnership has collaborated on the creation of what we hope will be a world class art exhibition that will feature cutting edge visual content displayed on what is effectively a ‘living sculpture.’ This installation and in particular its artwork will have a global feel while still acknowledging its local context.”

In addition to our featured artists, 150 Media Steam will exhibit exceptional works by collaborative groups of students and educators…Interested artists can apply on the website to have their works shown.

The first of many prominent artists to be featured in 150 Media Stream is the Chicago-based contemporary artist Jason Salavon, whose artworks are included in prominent public and private collections all around the world, including the Metropolitan Museum of Art, the Whitney Museum of Art, and the Art Institute of Chicago, among many others. Other artists selected for extended exhibitions in the weeks ahead are Leviathan, video artist Edyta Stepien, design collective THIRST, new media artists Kurt Kaminski, Geoffrey Alan Rhodes, Angus Forbes, sound artist Anil Camci, illustration artist Megan Pryce, animation artist Zige Zhang, and Riverside’s Zhou.

“In addition to our featured artists, 150 Media Steam will exhibit exceptional works by collaborative groups of students and educators, as a result of our affiliations with educational and cultural institutions,” Zhou added. “Very soon we will launch our website and identity (both created by The Narrative: Branding & Design). Interested artists can apply on the website to have their works shown. Ultimately, we want to include artists from all around the globe, to ensure 150 Media Stream reflects the entire world in presenting our visitors and tenants with experiences that are global and monumental, while also being local and personal.”

“Being part of creating this exceptional Chicago experience unifying 150 North Riverside’s premier architecture and tenants with dynamic content that evolves over time – igniting a continual sense of wonder and imagination within tenants’ and visitors’ minds – is really a dream come true for Leviathan and everyone involved,” said Jason White, Leviathan’s executive creative director.

The Media Stream will have its grand opening in April. For more details or to learn more, please visit http://150mediastream.com.