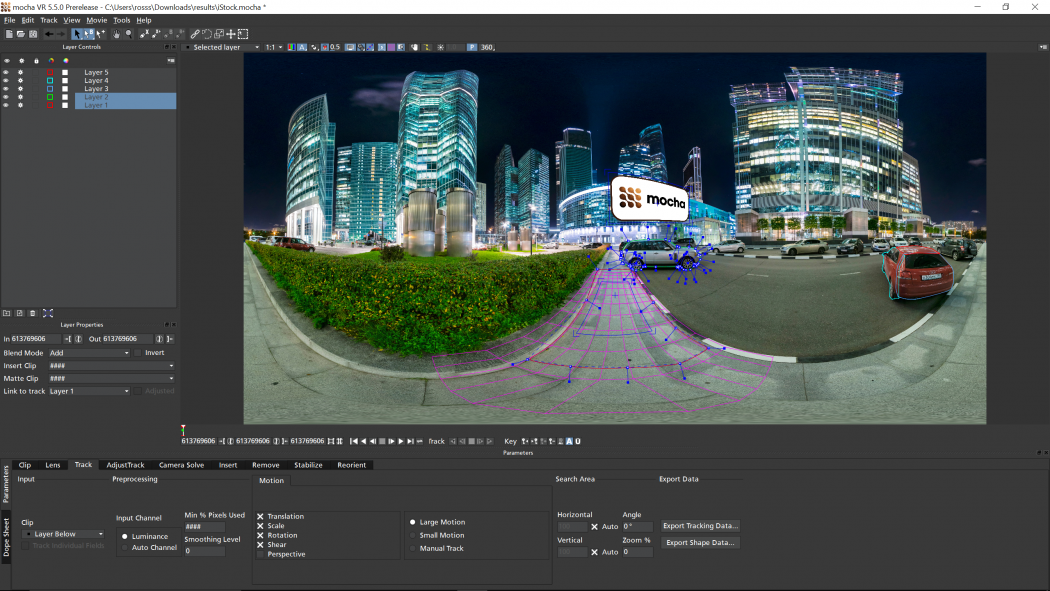 360° Workspace
Optimized workspace and toolset works simultaneously in rectilinear and lat/long views bringing 360° capability to a variety of applications. Editors and artists can easily track, roto, create effects and insert graphics without worrying about equirectangular seams or distorted pixels. 360° Masking Tools
Unlimited X-Spline tools for articulate shape creation and masking, saves hours of time versus traditional keyframing techniques. Roto-masks can be rendered back to host or exported to most editing and compositing systems. Horizon Stabilization
Designed to reduce unstable motion, the new Reorient Module can drastically improve nausea-inducing VR experiences by smoothing or stabilizing shaky, handheld and drone captured footage. Driven by robust planar tracking, a user can even track and stabilize difficult and “out of focus” footage. Lens Distort Workflow for 360° Compositing
Plug-in based lens correction workflow converts between lat/long and rectilinear for a simple workflow to add titles, graphics, patches and non-360 enabled filters to your 360 project.

Plug-in & Standalone Workflows
Running as a plug-in inside industry standard editing and effects applications Adobe Premiere Pro CC, After Effects CC, Avid Media Composer and Nuke provides an immediate and accessible workflow for 360/VR post tasks. Render finished shots to your timeline OR export tracking and roto data in a variety of formats for flexibility and project sharing.