Instead of any in-depth creative briefing, they were simply provided with five words to guide them: Full-Weird, Psychedelic, Psychotropic, Rhythmic and Trance.

According to company principal and executive creative director Erin Sarofsky, she and her colleagues were invited to LA to screen the movie before presenting their ideas for what they dared hope would become their fifth Marvel title project in history. Instead of any in-depth creative briefing, they were simply provided with five words to guide them: Full-Weird, Psychedelic, Psychotropic, Rhythmic and Trance.

“After seeing the film, those words took on new meanings,” Erin began. “The movement, compositions, transformations and overall vibe of the movie were completely unique… and were going to be next-level photoreal visualizations. Whatever we did, we knew the standards would be high; not only did it need to be beautiful visually, it also had to have all of those qualities.” 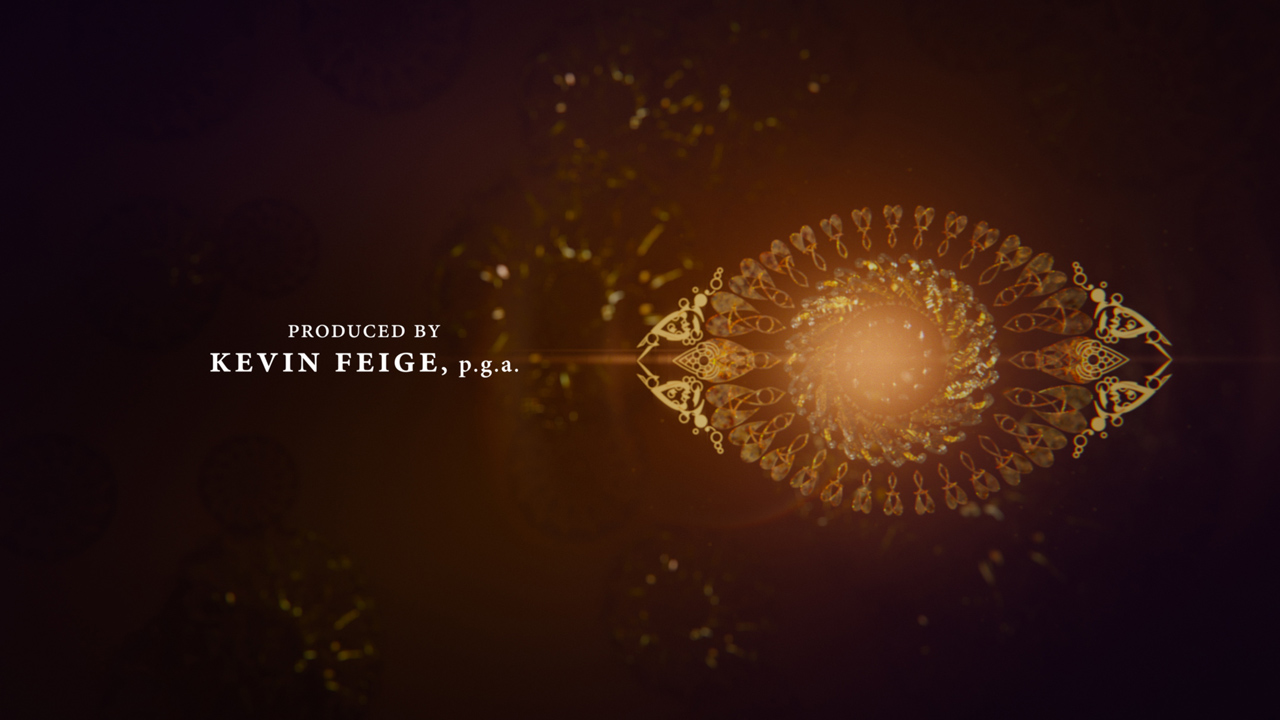 For Sarofsky, Erin served as lead creative alongside executive producer Steven Anderson, producer Sam Clark, lead animator John Filipkowski, VFX supervisor Matthew Crnich, and dozens of other top-tier talents. Each of their internal explorations was tightly aligned with all the keywords, but one dazzling solution was unanimously approved.

Connecting to the film’s core symbolism and rich, abstract and mind-bending imagery – where much of the production design is rooted in symmetrical locations – Sarofsky designed a series of intricate mandalas, and animated them using repetition, symmetry and 3D visual mastery. Artfully crediting the film’s principals, the piece evolves from simple, beautiful design elements into a grand composition. Elegantly intertwined with Michael Giacchino’s inspiring score, the visual and musical intricacies resolve over 90 seconds into a powerful, symbolic testament to the plot of “Doctor Strange,” and its hero. 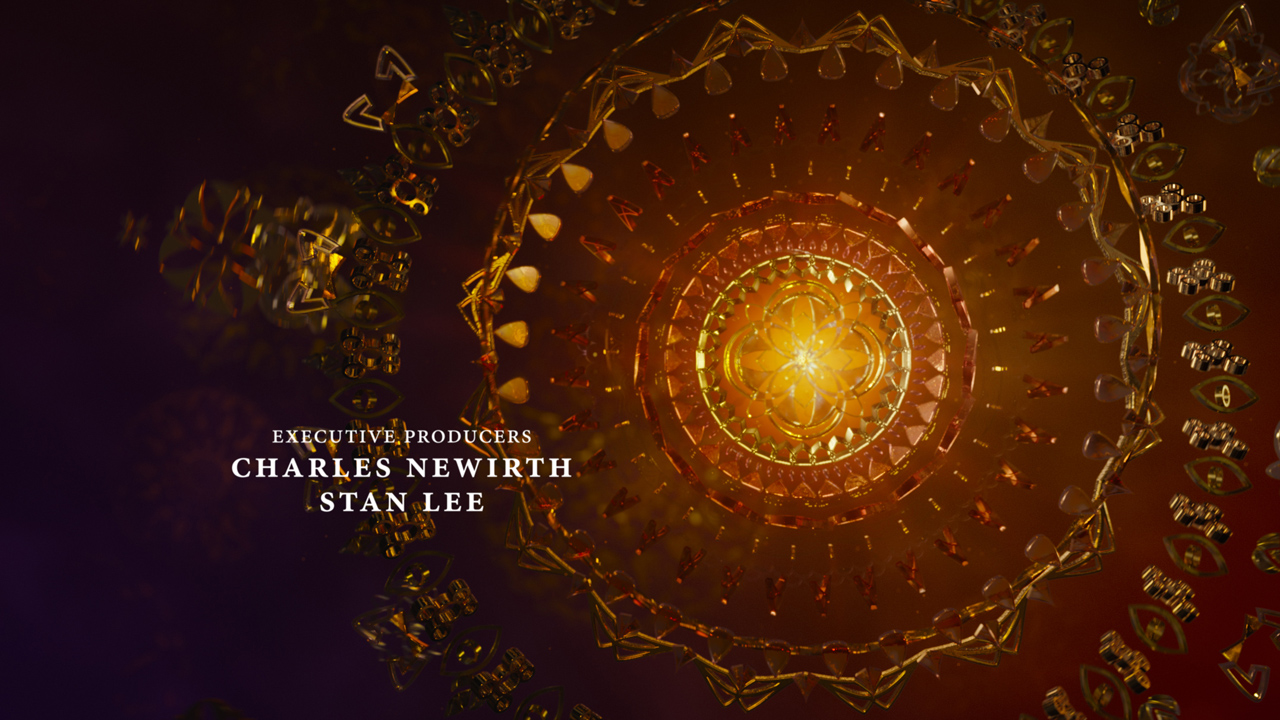 “Mandalas are spiritual symbols in eastern religions that represent a universe that goes beyond our physical bodies and minds,” Sarofsky CG artist Duarte Elvas explained. “We used them as a way to represent the doctor’s path from being self-centered to spiritual enlightenment.”

While its legacy of blockbuster work for Marvel puts Sarofsky on familiar ground, “Doctor Strange” gave the firm its first opportunity to collaborate with Scott Derrickson. “We mainly wanted to make sure Scott had a piece that he was proud of at the end of his film,” Erin acknowledged with a smile. 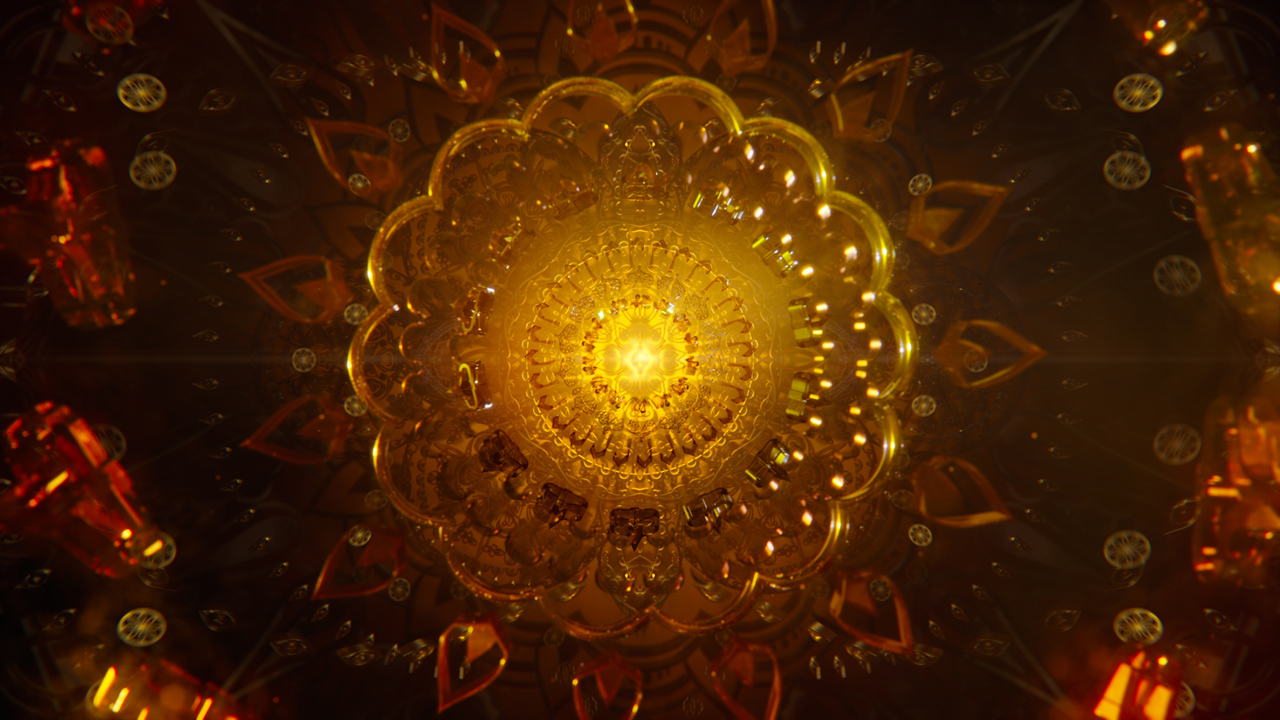 Beginning by creating original mandalas as vector designs, extrapolating them into 3D, and then texturing them to look like gemstones and weathered gold, three-dimensional space is where the design magic synthesized. In Duarte’s words, “We tapped into the warping of time and space, layering multiple levels of geometry and animation, building and breaking apart the ever-changing, psychedelic universe of mandalas the camera travels through.”

The process was complex, rewarding and brought our render blades to their knees… making them beg for mercy.

Of the finished results, Erin confided, “We are so proud that we were able to establish a photoreal look in an entirely CG environment. The process was complex, rewarding and brought our render blades to their knees… making them beg for mercy.”

Those references offer clues into the biggest challenges the main title artists and producers faced: Namely, technical hurdles arising from the complexity of their designs, and then completing, rendering, finishing and delivering their work on a very tight timeline. 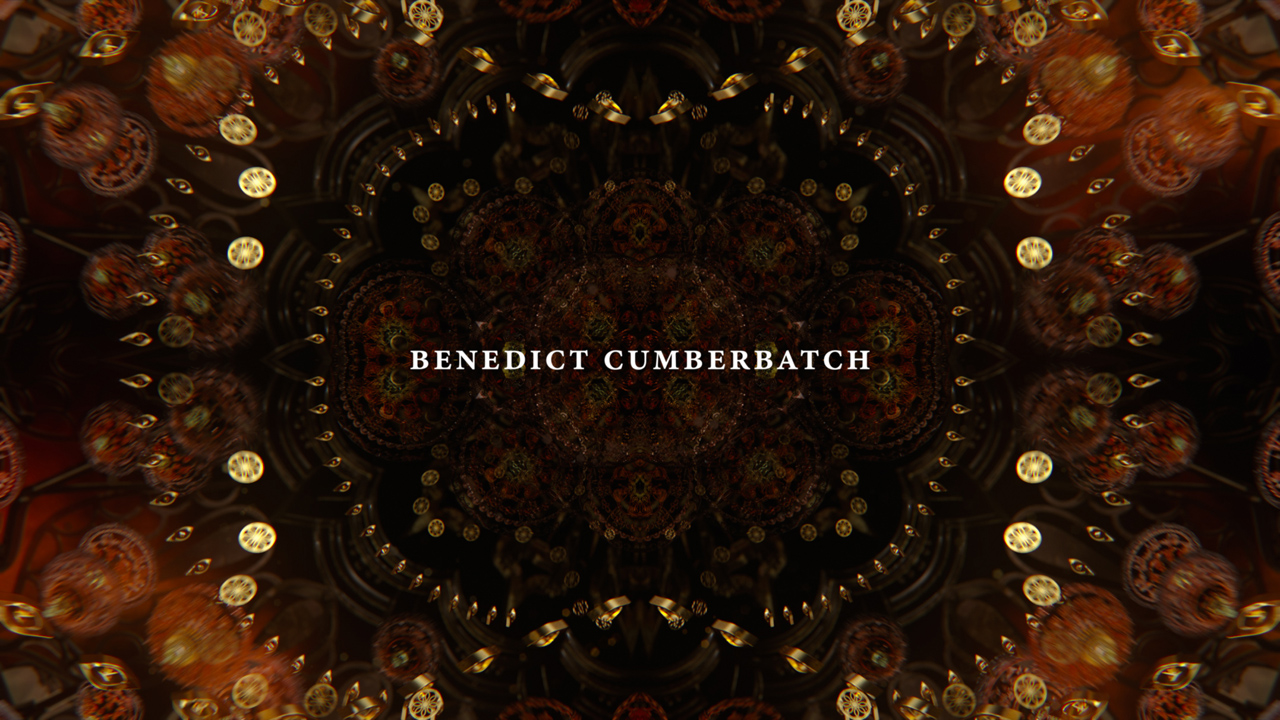 Resolving those key issues began with the choice of Maxon’s Cinema 4D software for modeling and animation. To John, C4D was instrumental in allowing the artists to quickly create and modify complex animations using the custom mandalas. “Everyone knows that great animation requires great render times,” he began. “By using C4D’s mograph module and Xrefs, we were able to create a complex animation in one project, then use a low-quality proxy in its place to finesse scenes and camera movements.”

While that sped-up animation, it also saved invaluable render times. “For rendering,” John continued, “we were able to swap low-res with high-res mandala animation at the push of a button. This impacted the animation and the texture materials… giving us the power to reference a single base material to create uniformity across multiple scenes, while allowing us to adjust our designs to our hearts’ content.”

Not only did these C4D innovations impact final delivery, during the conceptual phase, they also empowered Sarofsky’s artists to dive deeper into motion than ever before. “With this project, we really pushed the look our 3D renders in C4D, through careful lighting and the use of custom shaders (which of course, often means much longer render times),” Duarte added. 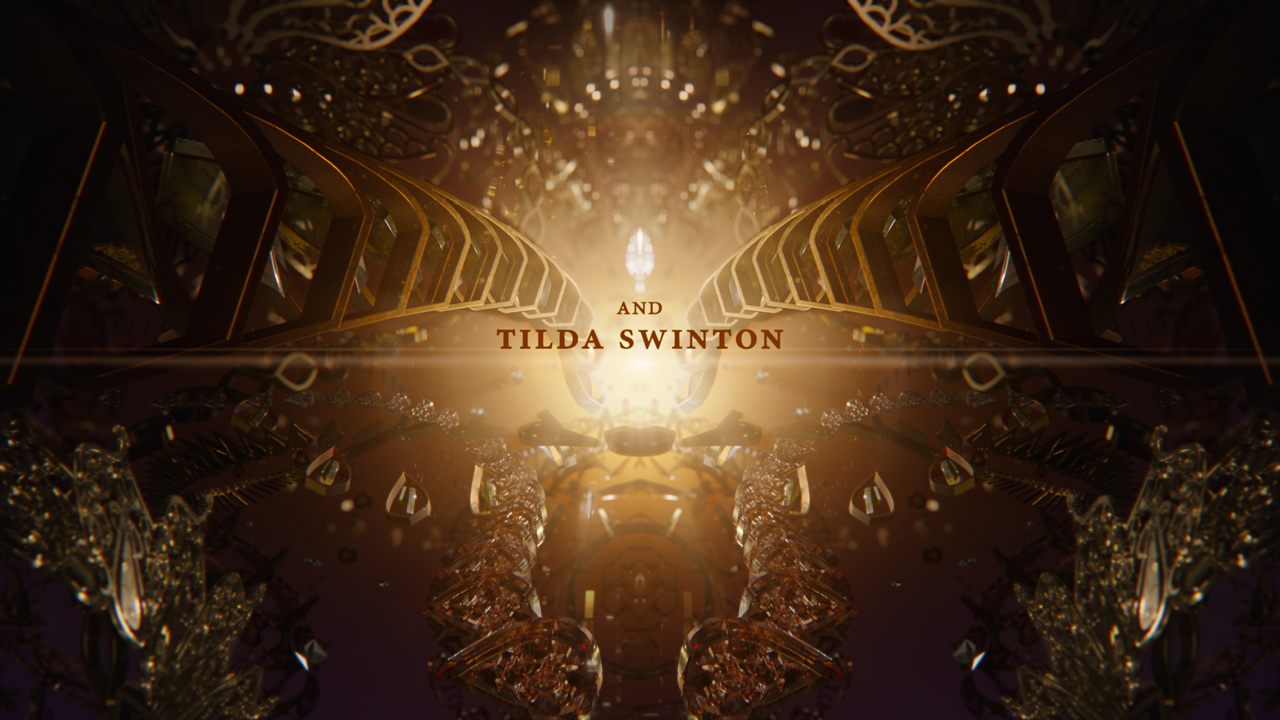 Addressing the central rendering issue, the number of powerful, rack-mounted servers dedicated to rendering footage (referred to by Erin as “blades”) was doubled to support this effort.  “Thanks to the scalable nature of render farms, we were able to rent additional blades to double the processing power of our farm in just few days,” Sam confirmed. “That gave our compositors the time they needed to really make our work shine on the big screen.”

In summary, after being created in C4D and rendered as multi-layer EXRs, the original animated content was then composited using The Foundry’s Nuke, where the team’s artistry involved adding color, glows, flares and other effects. “Specifically for this project, we made a very big push into using Python in Nuke to automate repetitive tasks,” Matt pointed out. “The hope was to afford our artists more creative freedom and support the development of even better work. So far, the results have been tremendous.”

At one point during the process I shared an idea that I thought might have gone too far, or gotten too weird.

The final step in Sarofsky’s delivery pipeline, where footage is conformed and finished in HD resolution using Autodesk’s Smoke, came together in the expert hands of Smoke/CG artist Cory Davis and Smoke assistant Erik Uy. This time, however, they faced a new twist. Until now, Sarofsky has delivered its work with a set convergence point for the left and right eyes; this time, both eyes were delivered in parallel… giving Marvel’s stereo team the power to adjust where Sarofsky’s work appears in the screen plane. It’s yet another example of the behind-the-scenes technical mastery required in Marvel’s Cinematic Universe.

With all of this in mind, savoring the main title’s design connections to its musical score can raise appreciation for Sarofsky’s craftsmanship to new heights. Consider this: After working hard to unite music and design transitions on Benedict Cumberbatch’s on-screen credit, the designers constantly sought new ways to match the animation to new musical cues each time an updated music track arrived. “Sometimes the changes were editorial, at others we would try a more dramatic camera move or brighten up the whole scene,” Duarte went on.

Reflecting the great care put into everything her company touches, Erin shares a final anecdote about the back-and-forth with Scott Derrickson. “At one point during the process I shared an idea that I thought might have gone too far, or gotten too weird,” she said. “He told me, ‘There’s no such thing.’ I really appreciated him letting us go as far as our imaginations would let us. “Secretly, I hoped that at some point he would reel us in and tell us we crossed the line… but he never did. So either it means we could have gone further, or there truly was no line to cross.”