The Colonie recently teamed with Burrell Communications to provide editorial, VFX and design services for ‘I Do,’ a broadcast spot introducing the 2017 Toyota Corolla. Creative editor, Bob Ackerman took the automaker’s tagline, ‘Let’s Go Places,’ and ran with it.  Fast-paced cuts and editing effects helped create an upbeat message that celebrates the bold creativity of both the new Corolla, as well as its target audience – today’s ‘on-the-go’ generation of young African Americans adults.

Lewis Williams, Burrell’s EVP/CCO, brought The Colonie onboard early in the process to collaborate with the production company, The Cavalry, ensuring the seamless integration of a variety of visual effects that were central to the style of this spot. “International director, Deluxe, and the whole team at The Cavalry were awesome at capturing some exciting and dynamic imagery”, said Ackerman.  “It was an honor to work with such a creative company.”

The commercial integrates three distinct vignettes, each with a bold, imaginative spin. The spot opens with a young woman behind the wheel of her Toyota.  She arrives at a city park and her friends help her yarn bomb the surroundings – from hand-knitted tree trunk covers to a slipcover for a loveseat and a garbage pail cozy in the likeness of whimsical characters.

We loved the idea. Condensing short sequences of footage into rapid progressions of imagery provided us with an innovative way to convey the full scope of these three scenarios… 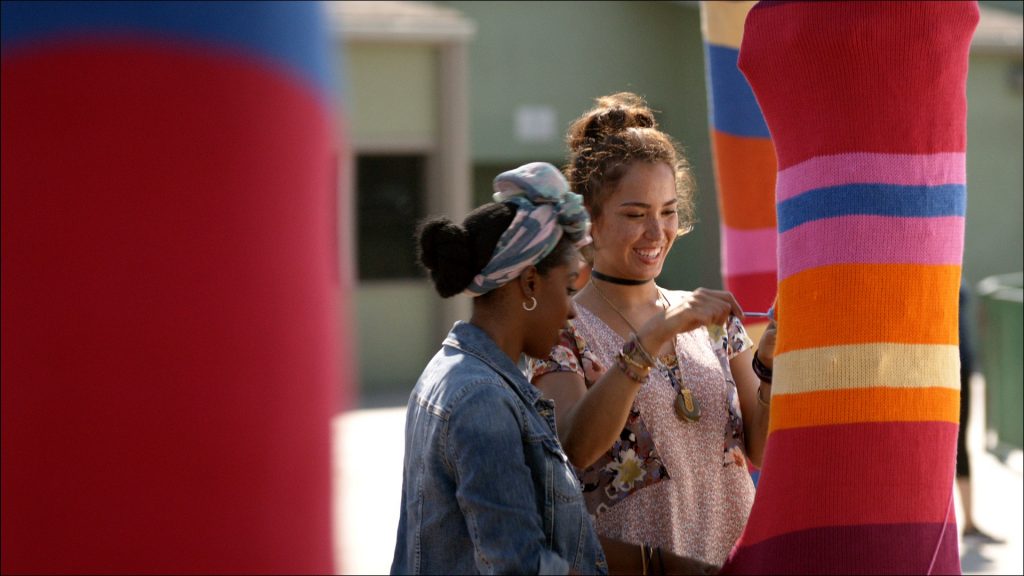 The second scenario finds an enterprising man parking his Toyota Corolla and unloading his ‘Pop-Up Barbershop’ in front of a tall wall adorned with artful graffiti.  A well-placed painting of a young man’s face under a huge Afro-shaped dome of leave that extends over the top of the wall completes the picture.  No sooner does the barber sets up his chair and sign then his first customer arrives. 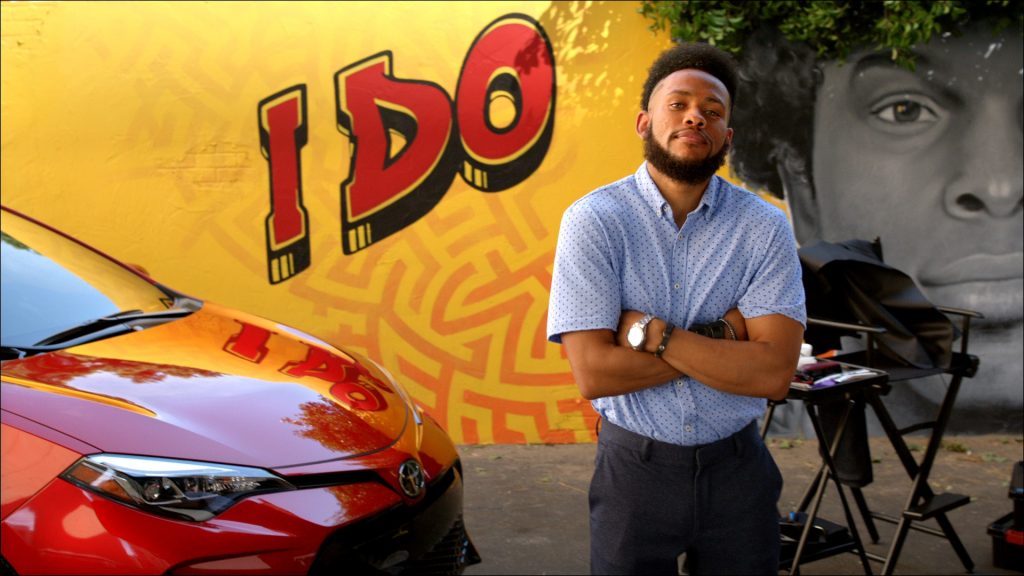 The third vignette featuring a young filmmaker shooting footage of the 2017 Toyota as her crew adds some illuminating effects. Taking her cues from this scene, The Colonie senior designer, Jen Moody, crafted a series of shots that utilize a “light painting” technique to create a trail of light effect. One of the characters writes the spot’s title, ‘I Do’ with a light, which Moody layered to create a more tangible quality that really sells the effect. VFX Supervisor Tom Dernulc took a classic Toyota Corolla from a previous segment and seamlessly integrated it into the background of the scene. 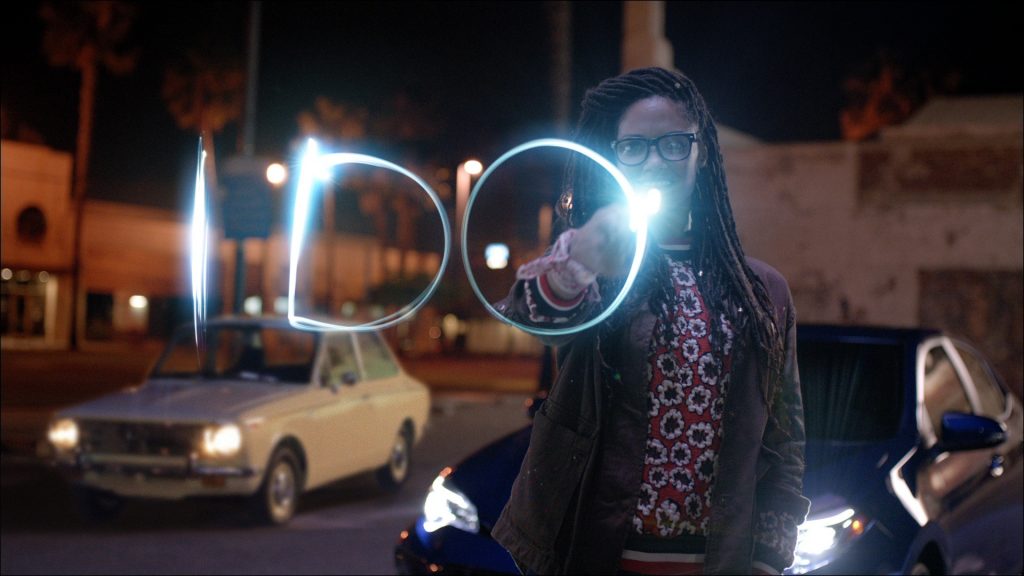 The Chicago-based boutique’s team explored several methods for creating the various VFX in the spot before deciding upon a combination of Flame Premium and After-Effects. Then, it was a matter of picking the right moments. Ackerman grabbed some of their top choices, roughed in the effect, and presented the client with a nearly finished look right from the very first rough cuts.

“Early on creative director Lisa McConnell had expressed a desire to explore using a series of stills flashing (á la TV’s ‘Scandal’) to advance the spot’s story,” says Ackerman. “We loved the idea. Condensing short sequences of footage into rapid progressions of imagery provided us with an innovative way to convey the full scope of these three scenarios in a very limited 30-second time frame – while also adding an interesting visual element to the final spot.” 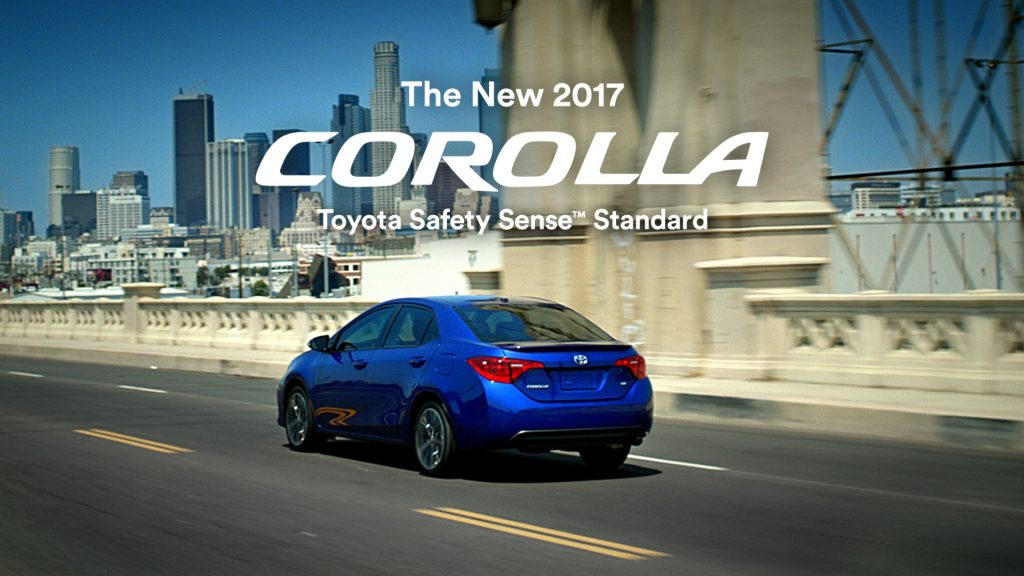 “The creatives at the agency consistently come up with forward-thinking creative solutions tailored to a product’s target market – and we’re always thrilled to have an opportunity to work with them,” says The Colonie executive producer, Mary Caddy.