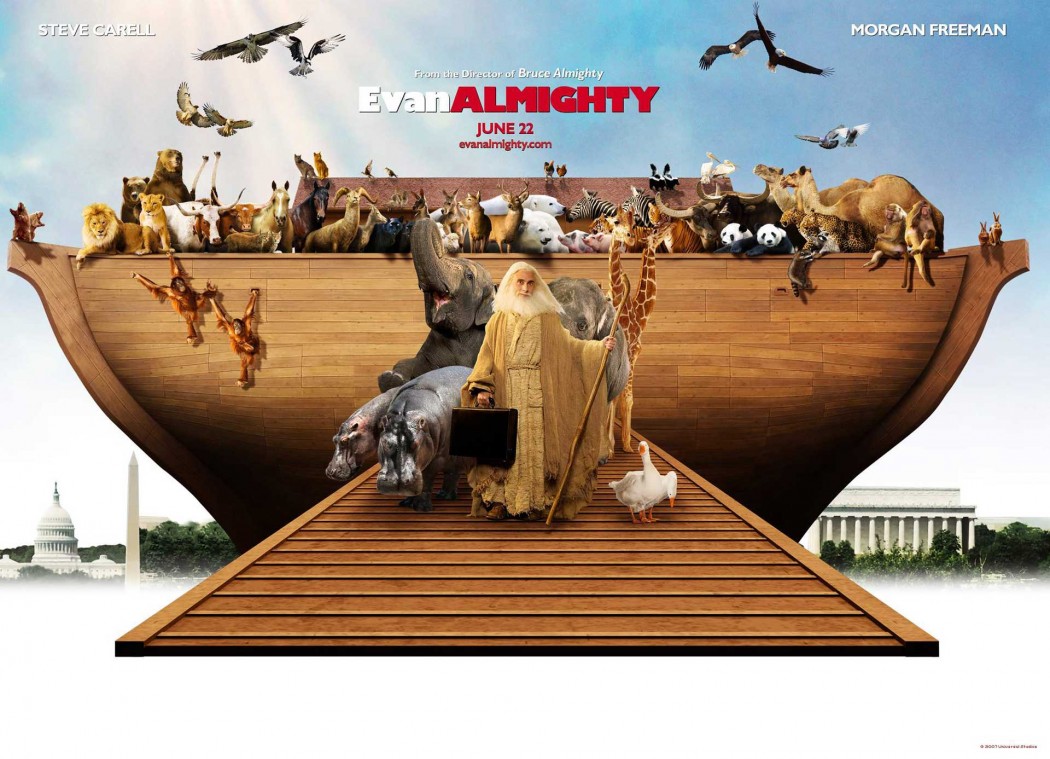 Feature film visual effects facility CafeFX created a scene-stealing school of computer generated tropical fish for Universal Pictures’s EVAN ALMIGHTY. The visual effects-intensive comedy, the second in the ‘Almighty’ series, is directed by Tom Shadyac. In the film, Evan Baxter (Steve Carell), newly elected to Congress, leaves Buffalo behind and shepherds his family to suburban northern Virginia. Once there, his life is turned upside-down when he is summoned by God (Morgan Freeman) to build an ark.

Evan discovers it isn’st easy being the new Noah as animals, sensing the impending flood, flock to him in the most unnerving ways and vie for his attention wherever he goes. When Evan visits the office of Congressman Long, played by actor John Goodman, the fish in the legislator 100-gallon tank are no exception. Their response to Evan animal magnetism is one of the film most clever and amusing sight gags. ‘The director, Tom Shadyac, told us we’sd be playing a big comedic role in the sequence,’ recalls CafeFX visual effects producer David Van Dyke. ‘He asked us to sell the scene and we appreciated him giving us the freedom to express his vision.’ To create the aquarium sequence, CafeFX modeled and animated 60 CG salt-water tropical fish that exhibit some extremely fishy behavior in Evan presence. CafeFX ordered 10 different varieties of tropical fish through a local shop, so that its digital artists and animators could observe their appearance and behavior, which they then captured with digital cameras and camcorders. ‘The reference material provided an aid for textures and lighting purposes,’ says CafeFX visual effects supervisor Jeff Goldman. ‘Early in the sequence, we mimicked the actual behavior of the fish in our animation, but as the scene plays out, the fish are a counterpoint to Steve Carell comedic timing.’

As Evan and the congressman enter the office, the fish are meandering realistically around their tank. ‘People can’st even tell they are CG fish,’ Goldman notes. ‘But when they spot Evan, they move toward him in a flash as a fixed unit. He tries to get them to disperse, but much to his dismay, they are almost worshipful of him.’ The prop fish tank was photographed in locked-off shots, filled with water and coral, and wrapped in greenscreen material. ‘We replaced the greenscreen area with the actors in live action plates and put our CG fish into the tank,’ Goldman explains. ‘It was pretty straightforward to rig the fish,’ says Goldman. ‘But fish don’st really move the way you think they do. Smaller fish don’st use their tail to propel them; they use their lateral fins and the tail acts as a rudder. Some species of fish don’st move much and some are constantly moving their fins. What really makes fish look like fish is their movement, and it trickier to capture than you might expect.’ CafeFX wrote automation scripts to allow the animators to set up the scenes where the fish hover, swim, meander and school. The animators tapped all the shaders in Mental Ray to deal with fish scales and iridescence. ‘A lot of salt-water fish don’st look like they have scales,’ Goldman points out. ‘It almost like they have a velvet texture, and we wanted to simulate that velvety look. Translucency was also critical as a lot of light is transmitted through their fins.’

CafeFX cloned bubbles from the actual tank of water and added bits of CG debris and fish food suspended to the water. ‘Those minute particles help to ground the fish, otherwise they’sd look like they were floating in air,’ Goldman notes. Some of the wide shots with the tank in the background are from the perspective of the fish looking out at Evan from inside the aquarium. ‘The fish occupy 80 to 90 percent of the screen and we had to figure out how to deal with a really wide-angle lens, ironically a fish-eye lens, which warps their world. To simulate that warp in 3D requires long render times, so we ramped up our speed greatly by recreating it in 2D using Krokodove plug-ins for Digital Fusion,’ Goldman says. ‘Trying to sell the aquarium joke with all the subtleties of comedic acting, for fish, was a big challenge,’ concludes David Van Dyke. ‘But we had a great team with a great sense of humor and they understood what we were trying to achieve. It was also a pleasure for us to work with Doug Smith, the film overall visual effects supervisor, and Lynda Thompson, the visual effects producer, to create this unique, light-hearted sequence.’ CafeFX employed Autodesk Maya for the animation and lighting of the fish, Maya and Z Brush for modeling, Mental Ray for rendering and Digital Fusion for compositing.