Syndrome Studio, a multi-award winning creative studio specializing in motion graphic design and animation for major entertainment, advertising and brand clients, has re-strategized the company’s core services, and will now focus on providing highly artistic and collaborative motion graphics and design to clients working across all media.

Since founding Syndrome in 2002, studio Co-Founders and Executive Creative Directors Mars Sandoval and Micah Hancock have become highly regarded, contemporary artists renowned for blurring the lines between art and commercial work in their vast and diverse creative output. They are truly collaborative with their clients, and have made a name for Syndrome based on their ability to find unique artistic solutions to projects of any scale, style, or media.

The collaborative approach to our work, the problem-solving, and especially the design process will always be what’s most important to us. 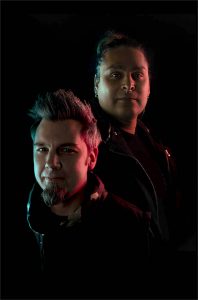 “We consider ourselves chameleons,” said Mars. “We are constantly seeking new creative challenges, experimenting with new technology, and enjoy engaging with our clients to create work that is exciting and memorable.  We pride ourselves on staying on top of the latest trends in design, but having our own voice and style that makes our work stand out, specifically within the universe of design for youth culture.  Our clients often seek us out to inject a youthful energy and contemporary aesthetic into their projects.”

Adds Micah, “The collaborative approach to our work, the problem-solving, and especially the design process will always be what’s most important to us.  In everything we do – from show packages for major networks, to stage graphics for music festivals and award shows, to motion graphics for trailers and commercials, to visual effects for music videos – we fully invest ourselves in the creative process, striving to create work that is fresh, fun and unexpected, no matter the size or medium of the project.  We love what we do and feel that our total commitment to the process comes across in our work.”

Top TV producer Mark Burnett, with whom Syndrome has worked on various projects, said, “I’ve had a great experience working with Syndrome Studio over the last decade on a wide range of projects like the ‘MTV Movie Awards,’ the Primetime Emmys, the ‘People’s Choice Awards’ and History Channel’s ‘The Bible.’ Not only do they have a great sense of design and animation, they have been reliable, collaborative, and a pleasure to work with.”

Syndrome’s liaison to Mark Burnett was through Executive Producer/Showrunner Jane Y. Mun. With Mun as its client, Syndrome has created motion graphics for such top projects as:

Says Mun, “Syndrome Studio has been my go to design house for over a decade! They have this amazing ability to translate our ideas into compelling and high-quality works of art. They are super collaborative, user friendly and they always go the extra mile to deliver fresh and unique design for our shows.”

Syndrome just recently finished a show package and opening title sequence for an MTV series client Erin Gamble is producing at Embassy Row called “Unlocking the Truth.” Says Gamble, Co-Executive Producer, “We started up a series that was a new creative direction for the network, and yet was on a challenging delivery schedule. Syndrome was able to match our pace and follow through with all requests – they’re highly responsive, creative and never missed a step or a deadline. They were great partners to have during the course of our development and delivery.”

During the course of several years, Syndrome has also worked on a series of Spanish-language commercials for AT&T. At the time, their client was Momo Parra, who was a Senior Integrated Producer with Bravo/Y&R in Miami, an agency that focuses on the Latin American market. Syndrome did all of the design, animation and VFX for several of these mostly music-focused commercials. To view these projects, please see:

Regarding his working with Syndrome, Parra, now a Senior Integrated Producer with Zubi Advertising, said, “If working on a new project isn’t fun, then it’s not worth it. Working with Syndrome is fun, lots of fun! They are easy-going people with a great attitude – they are always ready to listen and to work with you and your team. Creatives love them, and our clients really like their contributions. Syndrome is one of those companies that you always come back to, again and again. I initially chose to work with them based on their previous work with music videos and celebrities, as well as their budget flexibility. They are not just ‘task-doers’ – they work closely with any agency creative team each step of the way, from brainstorming an idea to post production to the final execution of the campaign. I recommend them 100% to any other advertising agency seeking a truly collaborative creative partner.”

Since launching 14 years ago, Syndrome has created and produced motion graphics and animations for many hundreds of other projects, ranging from those featured in hit TV shows and large scale live events, to commercials for major brands, music videos, videogames, and industry gatherings. Among Syndrome’s other work highlights not already cited above have been: