Since it was announced at NAB, Blackmagic Design engineers have worked closely with professional cinematographers and DoPs on the new camera operating system and have designed an interface that revolutionizes the way customers interact with and use digital film cameras. The new URSA Mini camera OS brings massive innovation to digital film, and makes Blackmagic Design cameras easier and more intuitive to use.

Its a privilege to be able provide this update to our URSA Mini customers who are some of the worlds top cinematographers and who blow our minds with their creative work!

The public beta of the new camera operating system replaces multi level menus, massive numbers of buttons, and hard to find settings with an elegant, beautifully designed interface that puts the most important and often used functions at the operator’s fingertips. For example, the new heads up display dramatically reduces the number of menus and submenus needed to find specific settings and commands. That means customers can now quickly change settings such as ISO, white balance, shutter angle, iris, frame rate, frame guides and more without ever having to navigate through any menus. What’s even more exciting is that customers can quickly toggle back and forth between different settings, allowing them to try different combinations of settings on the fly. Customers can also save and load presets for different shooting situations and save them to a card for use on different cameras. 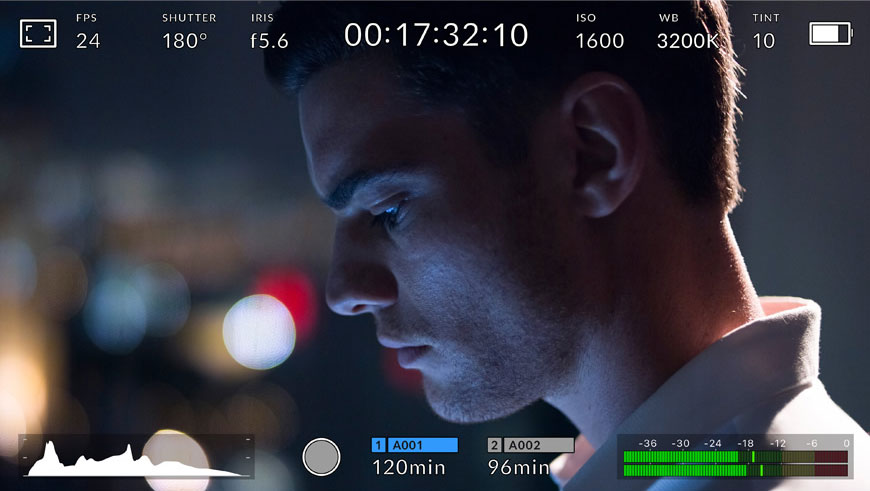 In addition, there are now custom white balance and white balance presets, along with tint control settings. Customers also get more accurate shutter angle selection, including a large easy to use on screen keyboard for quick entry of settings. When entering the shutter angle, the new URSA Mini camera OS will even offer smart flicker free shutter angle suggestions to assist the camera operator. These suggestions are automatically calculated based on the frame rate and the electrical system (50Hz or 60Hz).

False color exposure tools have also been added that make it easier to properly set exposure. When using false color, specific ranges of luminance in the image will show a color overlay. For example, green indicates neutral grey, while pink tones are good references for skin, which is typically one stop over neutral grey. Using false color helps camera operators keep exposure consistent from shot to shot, which also saves time in post production when color correcting and finishing.

The public beta of the new URSA Mini camera OS also improves focus assist. Customers can now adjust the color for focus assist overlays, or they can choose to use more traditional focus peaking tools that simply highlight the sharpest areas of an image.

Entering metadata on cameras has always been tedious. The new URSA Mini camera OS solves this by giving customers a new “slate” page that can be accessed by simply swiping left or right on the screen. This brings up a slate for both the shot and the entire project. Entering metadata is simplified through the use of predictive entry suggestions. A preloaded dictionary of commonly used terms can be applied as metadata tags with a simple tap. For example, if you stop and start recording, the take will automatically increment. If you increase the scene number, the shot and take will automatically reset to 1. 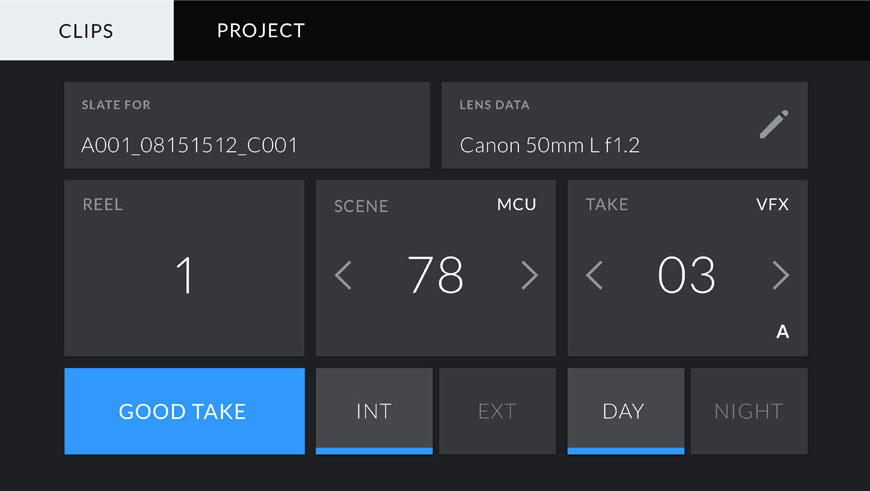 In addition, lens metadata is automatically read from electronic lenses or can be entered manually, along with production specific information, technical information and much more. All of this metadata is saved with the files and can be used by software such as DaVinci Resolve for editing and color correction.

To further simplify camera setup and use, all other settings are located under 5 easy to access tabs called Record, Monitor, Audio, Setup, Presets, and LUTS. The Record tab lets customers quickly select codec, quality, and resolution, while also setting up dynamic range, frame rates, sensor windowing and more. The new URSA Mini camera OS provides much more flexible media formatting, card usage, and recording information as well, making it easier for customers to know exactly how much more shooting time they have left and when they should switch cards. 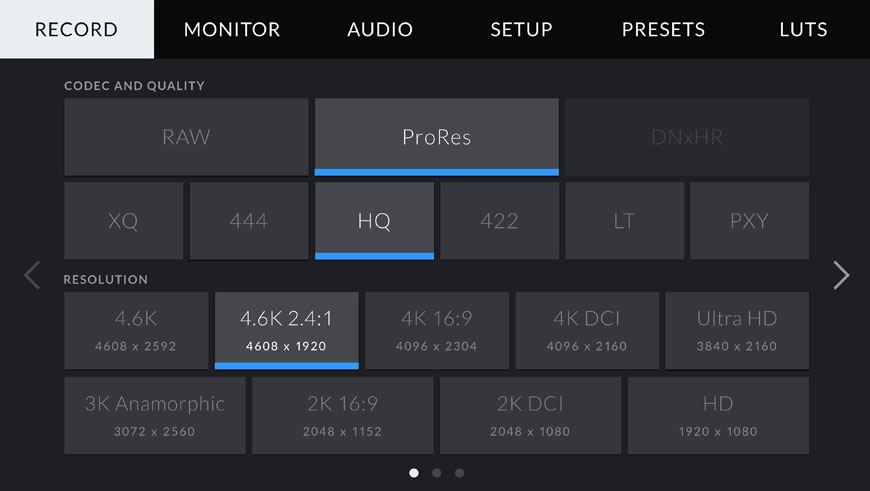 The new Monitor tab lets customers decide what is shown on the main LCD, and what is output on the front and main SDI. This can include any thing from clean feeds to LUTs, frame guides and more. Customers can even send different status text for the cinematographer or the director to different outputs as needed. The new URSA Mini camera OS also adds 1.33x and 2.x anamorphic de-squeeze for monitoring when shooting with anamorphic lenses. 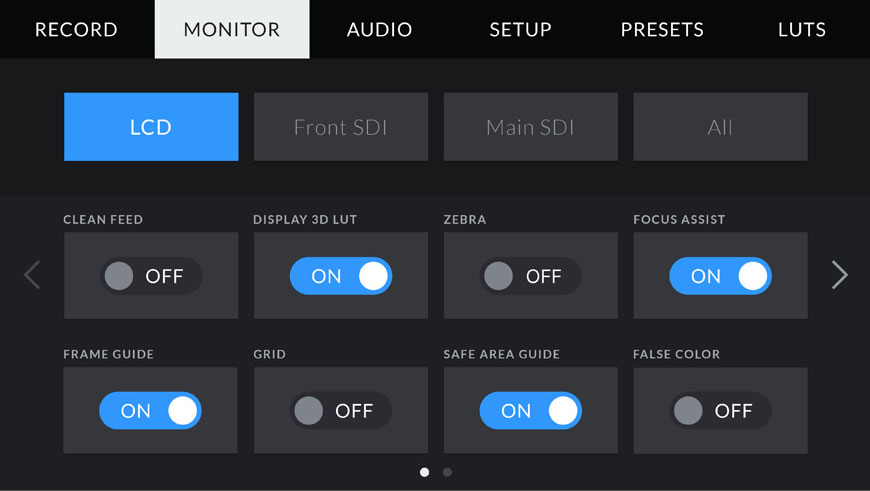 Customers can get quick access to audio level settings by tapping on the live audio meters. For more detailed settings, all of the audio input controls under the Audio tab. This includes features such as levels for the internal mic, speaker and headphone volume, low cut filter and more.

The new setup tab provides access to basic camera settings, as well as the ability to customize and program the external physical F1 and F2 buttons on the camera. Function buttons can trigger presets, be used as up/down buttons, or be used toggle specific feature on and off. In addition, the new URSA Mini camera OS can have up to 6 presets loaded. These can be loaded, saved, exported and imported from the Presets tab.

The LUTS tab lets customers import, export, manage and delete 3D LUTs. The LUTs can be assigned and displayed on the LCD or front and main SDI outputs independently.

“The combination of URSA Mini’s 4.6K resolution with 15 stops of dynamic range and the new camera OS is incredibly exciting,” said Grant Petty, CEO, Blackmagic Design. “Customers already love the images they’re getting from URSA Mini and we are still working incredibly hard to meet all the customers back orders. This public beta of the new URSA Mini camera OS gives our customers an opportunity to test all of the new features and provide feedback to Blackmagic Design engineers on these exciting new features. Our dream is to design the world’s most advanced cameras with an incredibly modern OS that’s faster to use and more feature rich than has ever been possible before. Its a privilege to be able provide this update to our URSA Mini customers who are some of the worlds top cinematographers and who blow our minds with their creative work!”