For decades, companies from around the globe have collaborated with one another to create better products, services, and in some cases – to create positive change in the world.

Let’s use Coca-Cola as an example. In 2009 Coca-Cola came up with the idea of the ‘plant bottle’ in which Heinz made a major investment. Together, their goal was to reduce emissions, waste and energy consumption by 20%. The PET bottle was born.

Later, Coca-Cola teamed up with the British firm ECO Plastics, to run a PET recycling plant in Lincolnshire, UK. The plant recycles more than 75,000 tons of PET annually.

And in 2012, Coca-Cola teamed up with the French pharmaceutical group Sanofi to produce and market “beauty drinks” made of mineral water, fruit juices and nutritional additives.

You get the idea. Corporate collaborations are common.

But what about collaboration with competitors – for example, would Coca-Cola ever collaborate with Pepsi. In general? The concept is unheard–of.

Not so for creatives.
Creators.
Innovators.
Rule-breakers.

Where it All Began 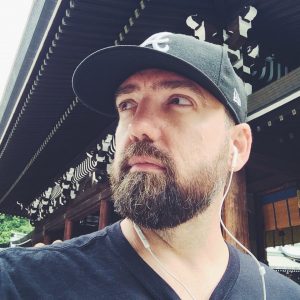 In 2009, nailgun* founders Michael Waldron and Erik van der Wilden were invited to speak at motion conference. When nailgun* closed their doors in 2011, Michael was hired as the Vice-President + Creative Director of Design and Animation at TV Land. He went on to become a ‘regular’ speaker at motion, presenting a variety of talks including Why Designers are Masochists – a topic that most of us know all too well – and 40 for 40 – celebrating the 40 top things Michael learned in celebration of his 40th birthday.

Then in 2013 Michael approached us with a new concept: The Exquisite Corpse Project. Based on a Surrealist parlor game called Exquisite Corpse, in which a group of artists complete a drawing in sections with each artist having almost no idea what the other artists have contributed, Michael’s goal was to bring this into the realm of motion design. He invited his team at TV Land to participate in this ambitious project. Almost a year later, motion 2014 attendees were treated to the first ever Exquisite Corpse Project. The project – and Michael’s talk – were a resounding success.

The concept was so good – I didn’t want to let it die. motion has always been considered ‘neutral turf’ – a place where competitors can come together and get to know each other as – people – rather than competitors. In the closing interview I did with Michael at motion 2014, I asked if he was up for another challenge. I said, “for next year, why not repeat this same concept – but this time, invite creatives from around the globe!‘

With a bit of encouragement from the audience in the form of loud cheers, Michael agreed.

Michael is someone who makes things happen. When he commits – you know it’s going to be good. In June of 2015, motion attendees were treated to the debut of The Exquisite Corpse Project 2 – the first ever major collaborative project between motion design studios. This enormous collaborative undertaking produced one of the finest pieces of original digital art by an impressive roster of motion artists from all over the world including: Jang Seokin, John Camalick, Gerald Mark Soto, Roger, Justin Harder, UVPH, Jonas & Co, Transistor Studios, loyalkaspar, Adolescent Inc, Kurt Hartman, SUSPECT, Daehyuk Park, Sung I. Sohn, Jie Yun Roe, Daniel Coutinho and STATE DESIGN – all lead by Michael Waldron as Director.

And then it happened. My fear of rejection combined with my knowledge of the extraordinary amount of effort that goes into producing a project like this got the best of me. During my interview with Michael at motion 2015, I couldn’t ask him to do another Exquisite Corpse Project in 2016.

At least – not till a couple of weeks later.

Until I knew he was rested.

Until The Exquisite Corpse Project 2 had been named the Vimeo pick of the day.

Then – and only then – could I ask Michael to create The Exquisite Corpse Project X – celebrating the 10th birthday of motion conference.

It was a Friday afternoon the last week in June 2015 that I made the ask. Since the project would celebrate motion‘s 10th birthday, it seemed only fitting that past motion speakers be invited to participate. The following Monday Michael agreed, saying he thought it was a great idea. This kicked off another year of The Exquisite Corpse Project.

The result? Unequivocally the best collaborative motion design + live action project to date by some of the top creatives in the industry.

Why Did it Work?

Which brings me back to the very beginning. Collaborations among competitors are usually unheard-of. So why was The Exquisite Corpse Project such an enormous success?

Perhaps it was because the project was lead by a ‘neutral-party’. Since Michael is the SVP Creative Director Art + Design at Nickelodeon and TV Land, we could always assume that he was considered ‘safe’.

Or perhaps it’s because over the past 10 years motion has laid a foundation of being neutral turf – a place where competitors can easily come together.

But most likely it’s simply because we’re creatives.
Innovators.
Rule-breakers.

Or as Timmy Fisher co-founder + creative director at MK12 so eloquently states,

Because we want to create stuff until we fucking can’t.
Until we’re dead.
Otherwise – what’s the point of it all?

Hmmm…what will Michael Waldron think of next?