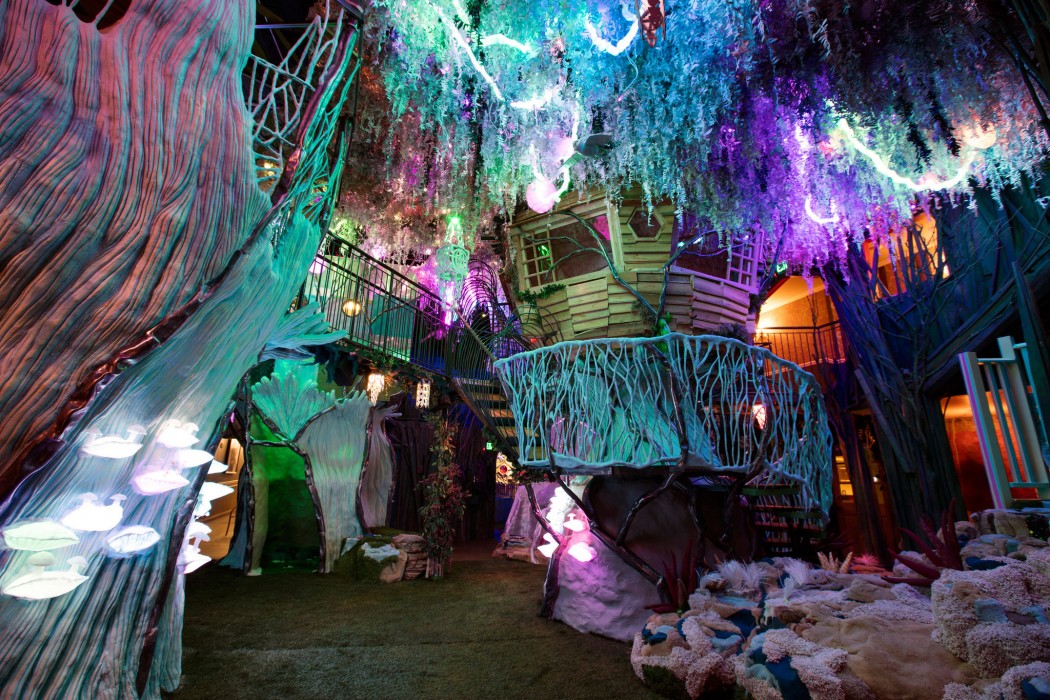 Meow Wolf. A Playground for Creatives

I’m constantly on the lookout for the world’s best ‘creative playgrounds’. Sure there’s lots of places to find inspiration – from galleries and museums to walks in nature or the city. But to be clear, my definition of a ‘creative playground’ goes much further. I’m searching for unique spots crammed with eye candy, places that call out and say “look at me” and compel me to ask “how did they do that?” Locations brimming with creative fun.

My latest discovery, Meow Wolf happens to be in my own backyard (well not literally in my backyard) but close enough. Sweet.

Meow Wolf, an art collective founded by 20-somethings creatives, has been around for over eight years. Founding member Vince Kadlubek explained that the collective was started by a group of artists who felt out of place in the Santa Fe art scene. Known for their immersive, multimedia experiences, Meow Wolf has never had a structure to house permanent exhibits.

Imagine having a 33,000 square foot canvas. What would you create?

Until now. Thanks to Santa Fe resident George R. R. Martin, author of the book series on which HBO’s Game of Thrones is based – all that has changed. When Martin was approached by the collective with their idea to transform an old bowling alley into an creatively unique arts complex, he couldn’t resist. Martin purchased the building and leased the place to Meow Wolf for 10 years and spent an additional $2.5 million in renovations. An art collective’s dream come true.

On March 18th, after 14 months of intensive renovation, The Meow Wolf Art Complex was born.

Now, here’s a question not many of us will ever have to answer: Imagine having a 33,000 square foot canvas. What would you create?

Let’s start with this. We’ll build a 22,000 square foot Victorian home perfect in every detail – inside the empty building. The home will serve as the location for immersive storytelling. With this in place, the story begins to unfold in your mind.

Picture this. It’s nighttime. You’re standing outside the house. The sound of cicadas and crickets serve as a musical backdrop for what’s to come. As you approach, you notice that the front door is ajar. Inviting. Intriguing. Coaxing you closer. Begging to be explored.

You enter the house. It feels like any other home in many ways. It’s lived in, and even though the occupants aren’t present – their story is. Through your exploration, you soon realize – this home is anything but ordinary.

And that’s when the extraordinary begins. A mesmerizing maze of over 70 distinct passageways beckons you to explore worlds beyond – enchanted forests, space stations, luminescent caves – including one inhabited by a life-size mastodon skeleton with ribs that can be played like a marimba. You now realize – you’ve entered The House of Eternal Return.

But what will you do with the remaining 11,000 square feet of your canvas – not to mention the 2.6 acre lot the venue is sitting on? Let’s include everything a creative could want: interactive classrooms, artist studios, traditional galleries, and event space – and of course, a gift shop – where Banksy can exit.

Here’s one of my favorite additions: MAKE Santa Fe – a playground within a playground equipped with laser cutters, 3D printers and just about anything you need to … MAKE your next creative vision a reality.

Perhaps what I like the most about Meow Wolf, is that this permanent art exhibition space is a far cry from the fine arts galleries and museums for which Santa Fe is known. In the same way that motion has become known as the ‘un-conference’, The Meow Wolf Art Complex is Santa Fe’s uniquely exquisite ‘un-gallery’.

If you’re into feeding your creative brain, the Meow Wolf experience should definitely be at the top of your list.