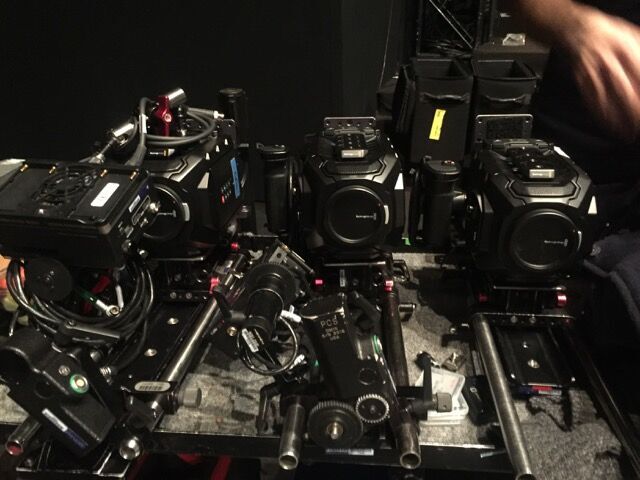 “I’ve worked with luxury brands in the fashion space for many years, and they always want a sophisticated, quality look,” said Lau. “To shoot at fashion week, you need a camera with a great image sensor, sharpness, cinematic look and high frame rates to capture the details, aesthetic, textures, colors, how the fabric moves on the models and how the models embody the clothes as they walk down the runway. URSA Mini 4.6K delivered on all fronts.”

The three URSA Mini 4.6Ks were set up to capture the clothing at different intervals from all angles. The first camera, rigged on high sticks and a fluid head, captured a wide shot of the models as they first stepped onto the runway to establish each look head to toe. The second camera, located about 130 ft. away from the runway and also on sticks, used a 300mm lens for a tight crop and close up shot on the detail of the clothing.

Noted Lau, “The models’ silhouettes filled the entire frame with detail on the 300mm, and we achieved nice vertical movement starting at the shoes, traveling up the garments as they walked. This is where URSA Mini’s super high frame rates are essential because you see the garments flowing and moving with the models in slow motion, so you see the true embodiment of the clothing.”

The third URSA Mini 4.6K was situated on a low high hat capturing a mid close up shot of the front, sides and back of the clothes as the models turned on a U-shaped catwalk. “We used speed ramps, focus and slow motion to create really nice, dynamic content,” said Lau. “The fashion buyers who watch these videos want to see as much detail as possible as quickly as possible to help understand what’s going to sell. Our production really endeavored to do that.”

Lau added that the two close up camera angles were a key variation to the traditional camera set ups normally used at fashion shows. “From a technical standpoint, most cameras need to ensure a good focus in the overall image, so they tend to be shot wider and more static,” he explained. “Extreme close ups incorporating tracking camera pans could potentially cause lateral noise and issues for focus. You could easily lose the detail you’re looking to highlight, which you only have one chance to get right during a live show. The gain is that you see the movement and fit of the clothes in detail and in multiple perspectives. The pay off is significant, and with URSA Mini 4.6K, we knew the results would look like a million bucks and that we could capture both the movement and the detail perfectly.”

With a deadline to submit finished footage immediately after the show’s completion, Lau and his team relied on the familiarity and efficiency of DaVinci Resolve Studio. “We performed test shots on set ahead of time and took those into Resolve to build pre LUTs to save time because we needed to push the content out so quickly,” noted Lau. “We dropped the LUT on top and had an instant piece out within 20 minutes after we took the last shot.”

Lau also noted that the URSA Mini’s 4.6K sensor gave the team great flexibility when working with the images in post. “We shot some cameras in 4.6K and some in HD since we needed the 120fps,” he said. “We had to blow up and zoom in 180 percent on some of the HD images, and they held up really well. The images all retained great clarity, creaminess and texture, and they didn’t break down or fall apart.”

We never want to compromise quality for speed, or budget for that matter. Blackmagic Design allows us to be fast-paced, flexible and affordable.

The images’ flexibility also proved beneficial when Lau needed to repurpose footage for the brands’ retail stores. He explained, “On this production, there was a double purpose to shooting the runway shows since the footage also airs in retail stores, but the stores typically have vertically-mounted screens. We manipulated the original horizontal image by cropping the image, turning it vertical and zooming in, and the URSA Mini 4.6K’s image held so well and still looked great.

“We never want to compromise quality for speed, or budget for that matter,” concluded Lau. “Blackmagic Design allows us to be fast-paced, flexible and affordable.”