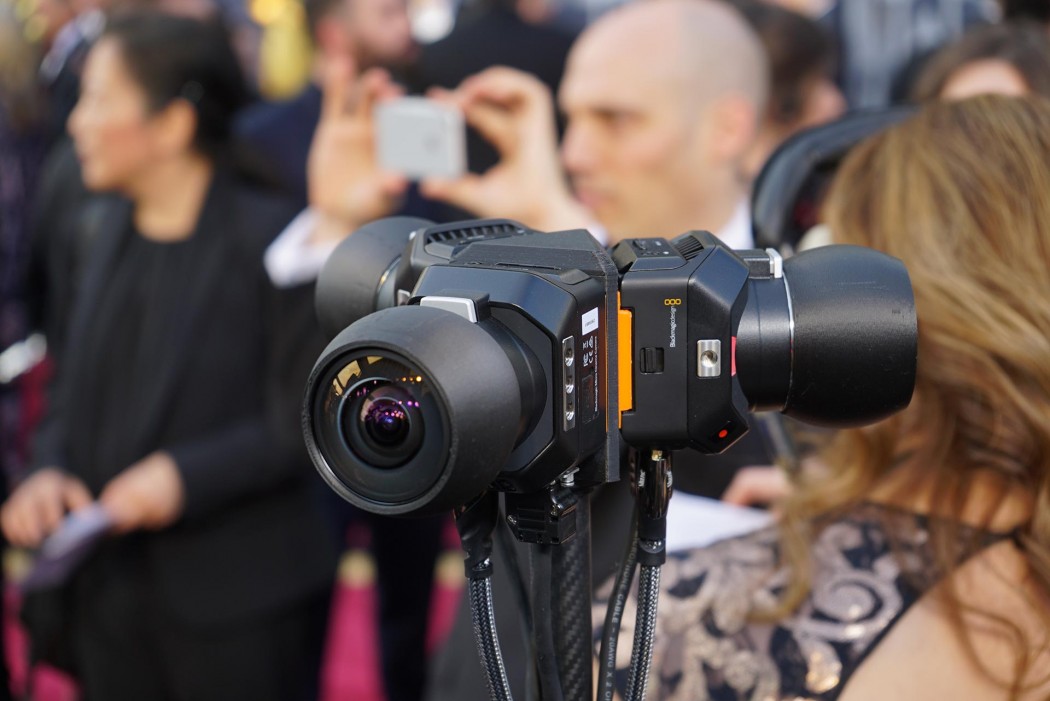 “For the Oscars, our main priority was to provide a live 360 video feed, which meant live stitching the output of the cameras into a VR-capable stream. We used a compact three-camera rig, designed primarily for live VR use, with the Micro Cinema Cameras,” explained Alx. “The Micro Cinema Cameras’ wide dynamic range was particularly helpful in the Oscars press gantry, as there were many press lights in view, which couldn’t be hidden from view with a 360 camera.”

The three-camera rig had a central genlock and power control box, and Alx and his team ran SDI via a converter to a stitching station several feet away. From there, the stitched 360 video was sent several hundred feet over SDI to a satellite truck and beamed to a facility in New York. Once there, it was encoded and uploaded to three different content delivery networks before being distributed to multiple test players, including a live player on the AP website, YouTube and several smartphone apps.

“We recorded internally to ProRes on SD cards, and it was reliable, even over several hours of recording,” said Alx. “We have also been post producing and stitching the footage into a higher quality archival output. This involves using stitching software, as well as Blackmagic’s Fusion Studio for stitching, which is showing promising results.”

360 Designs invents, designs and manufactures high-end, professional 360 cameras and live streaming solutions for virtual reality. The company had been looking for a compact, professional camera to build VR rigs around for several years. “Our needs included a compact form factor, genlock, active cooling, excellent reliability, remote control capability, interchangeable lenses, good mounting options and cinematic grade picture quality,” noted Alx. “We’d experimented with other small form factor and action cameras in the past, but could not get past their reliability issues, which are multiplied when you have many cameras in a 360 rig. Reliability is critical for us for professional use. The Blackmagic Micro Cinema Cameras ticked all the boxes, and we’ve been very happy with the results.”

One of the most exciting things for Alx and his team has been the Micro Cinema Camera’s expansion port, which allows creative technical use of the camera. “We’d been working with this connector for many months and are using a number of its features to design ‘command and control’ options for the cameras,” said Alx. “With the products we have in late stage development, we are able to start and stop multiple cameras at once, control the white balance, ISO and other settings of the cameras in the rig, as well as provide remote live video monitoring, among other things. This is unprecedented in a 360 rig, and we’re very excited about what it means for DPs and anyone shooting professional 360 video.”

With the Micro Cinema Camera, and even the Micro Studio Camera 4K, we are able to offer a new option: excellent picture quality in a convenient form factor.

Alx noted that prior to using Blackmagic Micro Cinema Cameras, the options for creating VR rigs were limited. “With the Micro Cinema Camera, and even the Micro Studio Camera 4K, we are able to offer a new option: excellent picture quality in a convenient form factor. For many in the fashion, broadcast, sports, cinematic and commercial sectors, this is an ideal sweet spot. Our customers are really happy, and we’re super excited where the 360 industry is heading.”

He concluded, “The reaction to live 360 streaming itself has been immense. It’s still very early days, but essentially for us, live 360 streaming represents a kind of teleportation. In a few years it will seem trivial to virtually attend any event or happening, wherever it is in the world. The opportunities to live 360 stream sports, concerts and other live events is significant.”