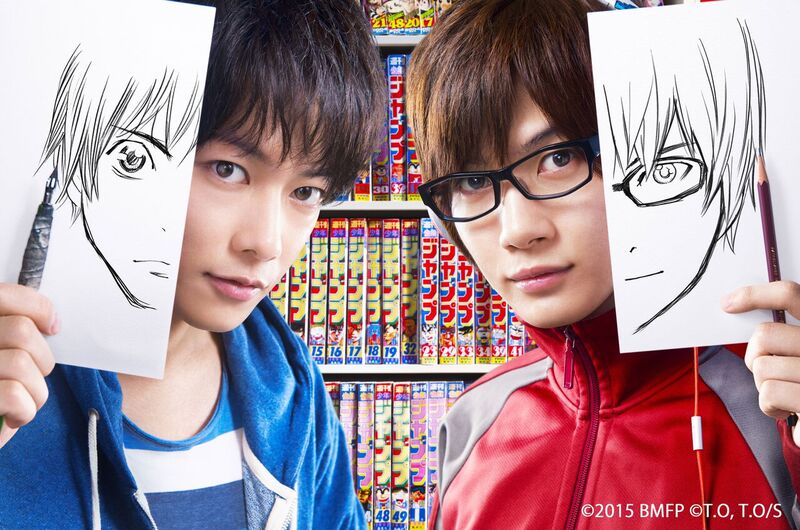 The popular manga series “BAKUMAN” is the second collaboration of Tsugumi Ohba, the author, and Ken Obata, the manga artist, who once created the huge hit manga series “DEATH NOTE.” “BAKUMAN,” serialized in the popular comic magazine, Shonen Jump, depicted two high school students pursuing their dream to become manga artists and was hugely popular. This led the story to become a TV anime series and a video game, as well as major film starring young popular actors, Takeru Sato and Ryunosuke Kamiki.

The film, “BAKUMAN” has three unique ending scenes. One of them shows the two leading actors drawing manga on a black board in a class room. By deleting the artwork on the blackboard and then reversing the scene, it looks like the two boys are drawing on the blackboard.

The ending sequence also includes the title scene, where Fusion was also used. The film’s title is superimposed on the shot of a desk typically used by manga artists.

“The desk with papers, rulers, pens and bottles of ink scattered on it was shot from above, mounting the camera on a crane. However it is not completely shot above the desk, so it was skewed a bit,” Inoue continues. “I used the Perspective tool in Fusion to remove the distortion and make it as if it were shot precisely above the desk. It was a challenge as the crane gradually pulled the camera so the whole desk would be revealed from a close up of the desk. It was very difficult to make the camera move steady, causing the distortion angle to be inconsistent. I created an animation for the move to make the shot steady all way through. Also, I imported tracking data and stabilized it to make the camera move more smooth.

“If you stabilize the image, the center of the image moves over. So I adjusted to keep the center point consistent. I used many transform type tools for the shot. A great point of Fusion is you can work on projects while keeping the original data all the time. For example, if I zoom a shot, the image which is now off the screen and not seen is still there. So I can adjust the position and don’t need to worry about whether the picture is already rendered and there are missing parts of the image, allowing me to add as many functions as I want.”

The ending credits for the film also included a difficult and unique set of shots. The camera dollies the workroom of the two lead roles and then it shows a bookshelf, which contains many manga comics. The design of those comics were a spoof of real Shonen Jump comics. Staff credits are on spine of each comic, which anyone who has read Shonen Jump comics would instantly recognize by the design. The book shelf and comic books were created using CG, and composited with the photo of the workroom.

“When the CG of the bookshelf was made, we did not consider mixing it with real video image. So the lighting condition of the bookshelf in the foreground and the workplace in the background were different. I imported a FBX file of side panel of the bookshelf and mapped the reflection material onto it using Fusion’s Sphere Map tool. This way, I could create the feeling of the lighting in the workplace reflected on the bookshelf, matching the foreground and background more naturally. If I do this kind adjustment in CG, it took so much time for re-rendering, so I could save a lot of time by using Fusion,” said Inoue.

Inoue commented about the advantage of using Fusion: “Fusion is very flexible tool for any circumstance. Even there is some issue that I may have to go back to 3GCG software and fix it, Fusion can solve the problem in many cases. Also It can work with many kinds of 3DCG software and tracking software, allowing me to work very effectively.