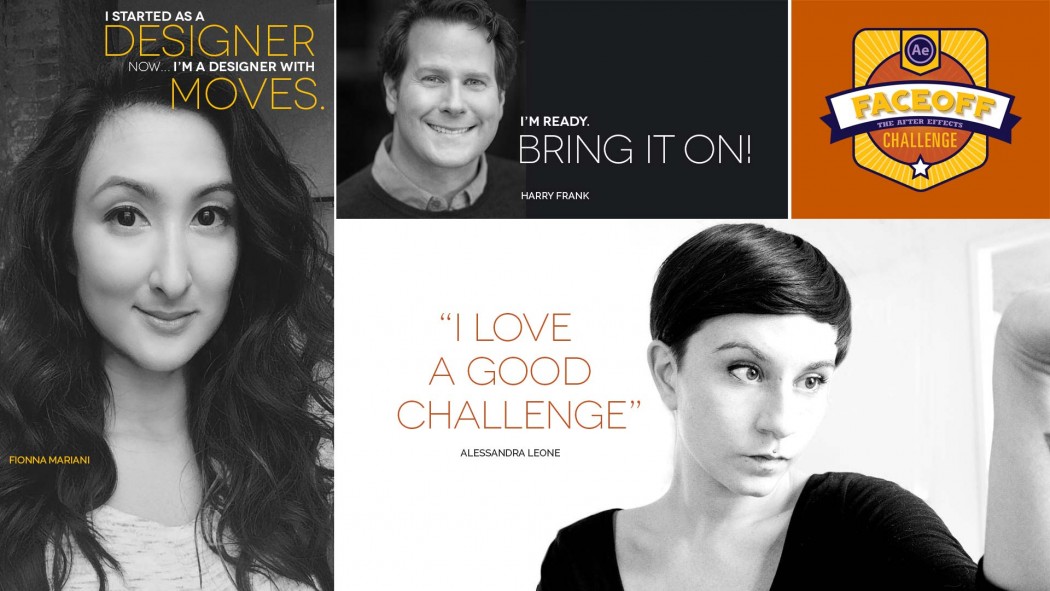 ALBUQUERQUE | SANTA FE – March 8, 2016. The motion 2016 FACEOFF Challengers have been announced. FACEOFF :: The After Effects Challenge takes place the opening night of motion 2016, which returns to Santa Fe, NM from June 9-11.

“This is the the fourth year that FACEOFF has been part of motion conference,” remarked Elaine Montoya, co-founder of the event. “We’re excited to have an extremely high caliber of challengers this year – it’s going to be spectacular!”

Fionna Mariani spent her early years in Taiwan and her adolescence in Hong Kong. “When I was 16 my parents decided I needed more culture, so we moved to…North Carolina,” Mariana said with a grin.

After graduating from high school Mariani went on to college and studied graphic design. During her senior year she was introduced to After Effects by a teacher, who said “its really cool, but I don’t know how to use it.” With barely a whiff of motion graphics, Mariani graduated with a degree in graphic design. Her first year out of college, she worked at a local magazine. Realizing she was still intrigued by motion graphics, she decided to make a career shift.

“I said goodbye to sweet tea and grits, packed up my things, moved to NYC and got my masters in motion graphics at NYU CADA. Since graduating I have been working as a designer animator and am currently working staff at Trollbäck creating awesome work,” explained Mariani.

“Although I miss my sweet tea, I’ve learned to love the various smells of New York city, and I’m glad that whiff of motion graphics lead me on the journey I’ve been on.”

Based in Portland, Oregon, Harry Frank is a Designer and Technical Artist for Red Giant. On any given day you can find him designing and developing tutorials, coming up with new software products, and creating visual effects for Red Giant films.

“Outside of work, I enjoy spending time with my family, playing percussion & piano, and exploring trails and waterfalls,” said Frank. “Oh. And – I’m terrible at Star Wars Battlefront.”

Alessandra Leone describes herself as a creative thinker. “I turn complex ideas into slick, effective, visual concepts. I like thinking big and making the big and sparks feasible,” exclaims Leone.

Leone attended an experimental high school where she focused on physics and informatics. That was the left side of her brain. The right side was studying piano and flute at the conservatory. From there, she attended Politecnico di Milano – a design university in Italy. She graduated with a degree in Product Design with a specialization in Communication Design.

While writing her final thesis on New German Cinema, Leone made the move to Berlin Germany where she now resides. She was hired by I-D Media as intern, and now freelances for them. Leone has been fortunate to work on projects for high profile clients including Adidas, Mercedes-Benz, BMW, Cisco, Bundes Ministerium für Finanz, Transparency International, and Magneti Marelli.

FACEOFF is a unique After Effects exhibition that takes place live, on stage in front of the audience at motion 2016. When the clock starts, the challengers have 60 minutes to create a 5-15 second motion graphic, and 15 minutes to render. The project? They won’t know! Just seconds before FACEOFF, the creative brief is announced. And then the excitement begins.

Throughout the evening, guests will be entertained by Los Angeles based DJ Cruze as he drops bass music to move your body & blow your mind!