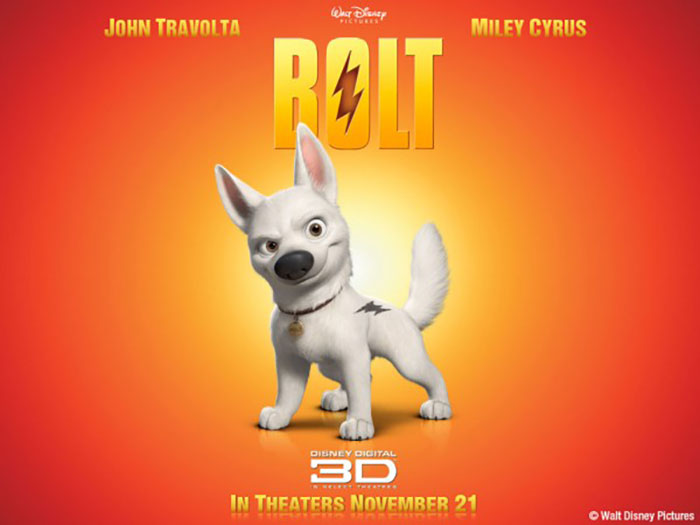 Disney’s Bolt Due for Release

For Super-Dog Bolt, every day is filled with adventure, danger and intrigue, at least until the cameras stop rolling. When the star of a hit TV show is accidentally shipped from his Hollywood soundstage to New York City, he begins his biggest adventure yet, a cross-country journey through the real world to get back to his owner and co-star, Penny. Armed only with the delusions that all his amazing feats and powers are real, and the help of two unlikely traveling companions,a jaded, abandoned house cat named Mittens and a TV-obsessed hamster named Rhino; Bolt discovers he doesn’t need superpowers to be a hero.

Bolt is the latest Disney CGI which is due for release on both regular and digital 3D on November 21, 2008. Formerly known as American Dog, the film came from an original concept by Chris Sanders (Lilo and Stitch), about a pampered pooch who ends up in the Nevada desert. The film was eventually directed by Chris Williams.

During a 2008 investor conference, Walt Disney’s Animation chief creative officer John Lassiter explained the synopsis: “Bolt is owned by a little girl whose father is this incredible scientist. Now, to protect the little girl, he gives the dog superpowers, but the dad is kidnapped by these bad guys . . . and the dog is protecting her by fighting off the bad guys with his superpowers, and for 10 years they search for the father and battle the bad guys.”

“Lassiter continued: “But all this is actually a TV show. You see, Bolt is a star of the most popular television show . . . but he thinks this is real. He lives on the soundstage and that’s all he knows, so all of this is real to him. In one unfortunate incident, he falls into a box and he’s shipped from his home on the soundstage to New York City and he comes out of it and he thinks it’s all part of his life, where he has superpowers.”

“But he is in the real world and nothing works like he thinks . . . he’s trying to figure out what the heck is going on with the help of this crazy alley cat and this super fan hamster who is always in his hamster ball . . . he realizes that he is just an actor on a TV show, that his entire life, 10 years of his short life, has been spent being a fake, that he is not really what he thinks he is. It crushes him, but, really, he learns what it is to be a true dog.” said Lassiter.