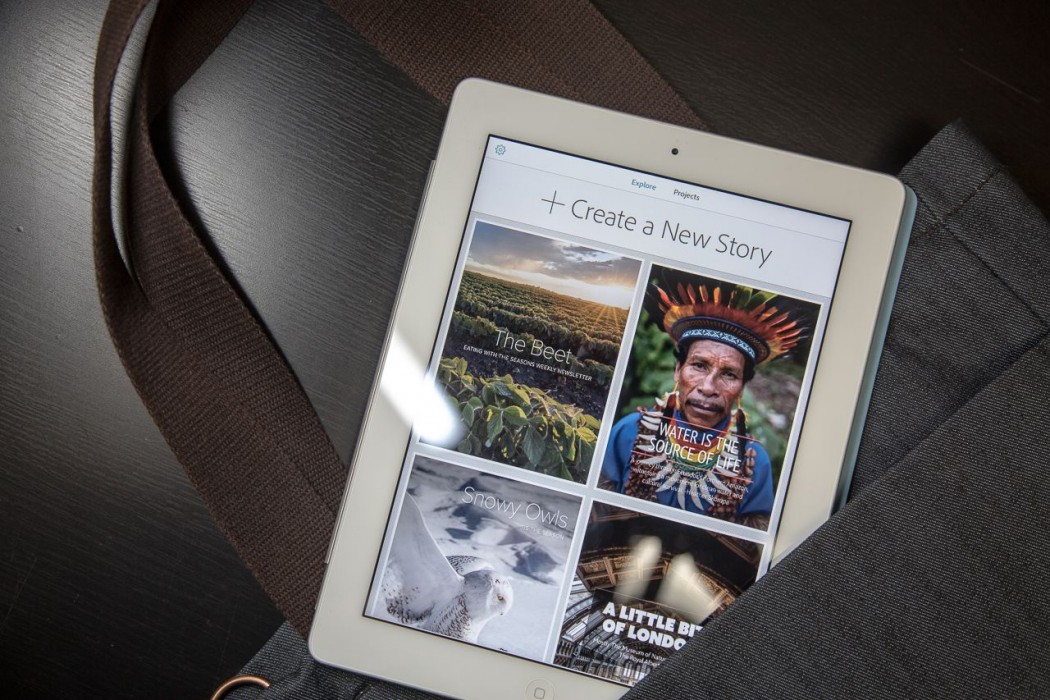 Adobe Slate From A Designer’s Perspective

It was just about a year ago when Adobe launched Voice – and innovative app that Emmy award winning tech journalist David Pogue deemed, ‘One of the simplest, most creative, most joyous apps ever written’. Voice went on to be included in Apple’s prestigious App Store Best of 2014 list.

Well, Adobe’s back at it again. Today, they announced the release of their latest iPad app, Slate. Slate lets users tell their stories using text and images. At its core, Slate is a continuation of Adobe’s recently adopted app design mantra touting ‘easy-to-use tools for creatives’.

Slate is made for anyone who wants to communicate with impact. Using a set of professionally designed templates, Slate users can now turn their next report, newsletter or travel adventure into a document that captures attention – complete with eye-catching motion.

Slate content automatically adapts to any device for a high-impact reading experience on tablets, smartphones or computers. Slate creations are links that can be shared easily via text message, email, embedded in websites, or posted on social media channels.

So how does Slate appeal to design professionals like myself? I decided to kick the tires and take it for a spin.

First off, as a design professional, Slate is so easy to use…that I initially floundered with the app for a few minutes, assuming that it couldn’t be that easy. As I entered a block of text, I was frustrated when I hit return to start the next paragraph. Slate automatically inserted a new ‘section’. I wanted a line break.

That was until I realized, that’s how Slate works. No need to know code that I use day in and day out in web development. No need to look for the tools I’m accustomed to in Adobe InDesign.

It really is that simple.

Naturally, as a designer, that led to a bit of frustration as well. I wanted to have more control over some of the text and photo elements, as well as their placement. These options don’t exist. For example, I made a photo grid that included 14 same-sized images. Slate’s grid feature defaulted to 3 rows of 4 images across – all the same size – and the two remaining photos took double the amount of space to fill the grid. Not the concept I had in mind. You do have the option to select them as a favorite as a means to make specific images larger, but since I was featuring the speakers of motion 2015, it was important for each speaker to have equal ‘visual weight’.

My workaround was to create a transparent png image – the same size as the speaker images – and add it twice, to bring the total number of images up to 16. Problem solved.

While you can be creative with workarounds, the truth is, Slate was designed to be “fail-proof”. All Slate projects are designed to be visually appealing.

Think clients. You know…the ones who take the amazing graphic you illustrated, or the magnificent images from the last photo shoot – and use them in their newsletter, brochure or on their website – shall we say – in a ‘less-than-visually-appealing’ manner. Note to self: buy each client a copy of Slate! But wait…it’s free! Hmmm, in some cases it might be worth buying them an iPad.

Adobe Slate is a v1 release. And this designer thinks it is pretty amazing. In a few short hours, I was able to create a project and:

– publish it to Slate online
– Tweet about it
– share it on Facebook
– email the link with an embedded image pre-made by Slate to colleagues
– text it to friends
– and TADA!! embed a linked image in a web page

So here’s what’s on my wish list for future releases:

It’s not going to replace InDesign when I’m creating for print, or After Effects when I’m doing motion design – but Slate will definitely have its place in my creative ecosphere.