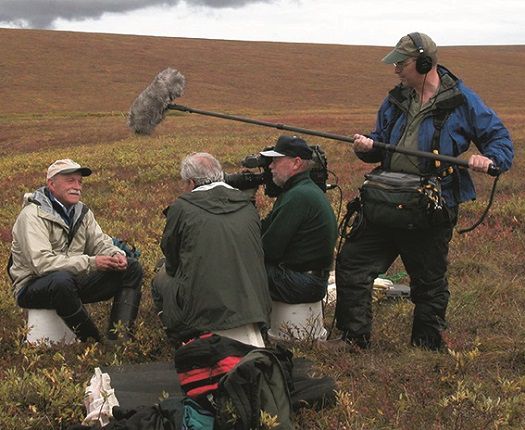 The Art of Going Boom: The Proper Use of Boom Mics

No matter what kind of mic and pole you use, the basic concept is simple. Hold things so the mic is above the actor, slightly in front of and pointed towards the mouth. Make it as close as physically possible without being in the frame. Thirty inches from the actor can be too far away, unless you’re in a well-designed studio or quiet outdoor setting. Use your earphones as well as your eyes for this placement: since you’re most likely coming at the actor from a sharp angle, you won’t be able to see when the tip of the mic is pointing off to one side instead of directly in front.

Closer is always better. Too close is impossible. On some sets, a difference of a couple of inches can turn usable dialog into something that has to be replaced in post. Some Hollywood mixers feel their boom operators aren’t doing their jobs unless the mic dipped into the frame on at least a couple of takes. As a general rule, the mic should at least be close enough that your actors can reach out and comfortably touch it.

Keep the mic pointed at the mouth at all times. You should be able to draw an imaginary straight line, through the center of the mic and right to the talent’s lips. Otherwise, as the actor drifts into areas of the pickup pattern that aren’t perfect, the quality of their voice will change. This may require adjusting the angle of the shock mount, so the mic stays in the right direction for the way you’re holding the pole.

Overhead booming provides the most natural sound for dramatic dialog. Since the mouth is closest to the mic, voices are emphasized—a good thing—while the downward angle picks up prop noises and footsteps to a lesser extent. But remember that highly directional mics change the timbre of sounds coming from the back and sides. If the ceiling is too close to the mic, echoes from it may color the dialog.

In his book Sound Man, experienced mixer Richard Patton suggests waving the boom around the acting area, before the take, and looking at the shadows. Get used to where you can put the mic safely, so as not to cast a distracting shadow while panning from one actor to another. Patton recommends sighting along the pole when you find that position, and mentally marking where it points to on the set—a prop, decoration, or even marks on the wall—so you can get back to that position quickly when you need a safe place again.

• If there are many lights, you may be able to plant an opaque object to cast a deliberate shadow. These flags can blend in with the set lighting, giving you a larger area to move the boom. But at many shoots, getting one is as much a political challenge as a technical one. On a professional set, anything to do with lighting is the responsibility of the grips. You can’t touch the flags or lights, so you have to convince them to.

• If you can’t avoid shadows, find a place where you the boom casts a soft shadow that blends in with the set somehow. Then don’t move during the take: a moving shadow will call attention to itself.

Patton passed away in 2012, after a long career that included mentoring and supplying equipment for other sound people as well as working on major shoots. His contributions certainly live on.

If the ceiling is too short or the shot requires a lot of headroom, booming from below is often an alternative. But it requires more cooperation on the set. Prop noises and footsteps will be louder, so lines have to be delivered without too much movement.

If you can, stage the shot with characters sitting down: their mouths will be closer to the mic. There’s a tendency to tilt the camera down as a shot gets wider, so the camera operator will have to warn the boom op before zooming out.

If two characters are close together, you can often position the mic between them— either above or below—and just rotate it slightly as they exchange lines.

Booming from directly in front, with microphone parallel to the floor, is seldom a good idea. Echoes and noises from behind the actor will be picked up almost as loudly as the voice. Mouth noises and sibilance are generally projected forward, so a close frontal mic will pick up more of them.

If there’ll be more than one actor in the scene, things get complicated. You have to move between them in the pauses between lines, stay approximately the same distance from each, and end up in the same place each time. For occasional step-ons, when you can’t swing around in time, it might sound better to stay with the first speaker rather than move during the second one’s line; depending on the mic, moving during the line can be very distracting. If there are a lot of step-ons, have a production conference: something—the quality of the track, the director’s vision, or the ability to use a boom at all—is going to have to be compromised. The everybody-talking-at-once scenes pioneered by Robert Altman used lavs on each actor, often recorded to individual tracks so they could be sorted in postproduction. Booming that kind of scene is almost impossible.

The reason you need to be close, is to get as much of the actor’s voice as possible. Competing noises are all around the shooting set, even if you’re not aware of them during the take. The mic also hears prop noises and footsteps, background traffic rumbles, and reflections of the dialog off nearby surfaces (because of the delay, these reflections muddy up the voices instead of reinforcing them). Sounds fall off rapidly with distance, so by getting closer to the actor you’ll hear proportionately less of the junk.

A few tricks will let you get farther away without hurting the sound:

• Soften the set. Reflections are the biggest problem, particularly when you leave the well-designed spaces of a studio and move to real-world locations.

• Keep things quiet. Get rid of as many environmental noises as possible. This may mean turning off HVAC or computer systems during the take, or moving generators to another location. It also means cutting down on prop noises and footsteps. Throw a sound blanket on the floor, or moleskins on the soles of actors’ shoes, if they have to walk around (particularly important when booming from below). Put a piece of foam-core on the desk if the actor’s going to be putting something down.

Be aware of electronic noise as well; it also competes with dialog.

• Get a better mic. All mics generate some internal noise, and electrets are noisier than externally-polarized condensers. But cheap electrets are invariably noisier than good ones. Often, the amount of noise is almost directly proportional to how much you thought you saved when you bought the mic.

• Use Star-Quad cable if the mic is any distance from the recorder or mixer. This cheap enhancement lowers electronic noise pickup from lamp dimmers, video wiring, and high-current lighting cables.

• Depending on how you’re recording the sound, it can help to use an external mixer—even if there’s only one mic and you’re not really mixing anything. Most cameras add electronic noise to the track when you plug a mic directly into them, and generate less noise with line-level signals.

As a shot gets wider, you’ll have to move the boom out so it won’t be seen. This changes the ratio of direct to reflected sound, so the mic will pick up relatively more room reverberation. A small amount of this is not only acceptable, but appropriate: wide shots make the actor appear farther from us, and in real life we expect to hear more echo from a distant voice than a close one (even across a small room). The converse is also true: as the shot closes in, you have to move the mic in to pick up less echo.

If a shot is framed very wide but without much headroom, you might want to deliberately pick up more echo. Raise the mic slightly higher than usual, or point it more toward the floor. Don’t do this trick unless you’re absolutely sure of things. While it’s easy to add room reverb in post, it’s very difficult to make it match the visual setting. While it’s possible to partially reduce some kinds of reverb in post, using very new software, the process is as likely to make things worse as to make them better.

• The effect must be subtle. Once we’re aware of changes in reverb, they become distracting. Early talking pictures changed the mic perspective with each edit: the effect was horrible, and sound operators quickly learned to leave their mics relatively stable.

• Each character’s volume should stay constant during a scene. Since moving a mic farther away means less of the voice is picked up, you have to compensate by raising the recording level . . . simultaneously raising the background noise.

• Leave difficult decisions for post-production. If you’re not sure, stay close.

TIPS – How to stay out of the shot

• The boom operator wants the mic as close as possible. The director of photography wants total freedom composing the shot. A reality check is always necessary, and—unless you have a video monitor available—you’ll have to count on the camera operator to tell you during setup how close you can get.

• You could start with the mic high and gradually lower it until someone says “any lower and you’ll be in the shot.” But that almost always results in too much safety margin, and more mic distance than is necessary. A foot of extra distance to protect the frame doesn’t look any different than an inch or two, but sounds a lot worse. It’s better to start with the mic in the shot and gradually raise it until it can’t be seen any more.

• Some boom operators put a piece of white camera tape on the end of their windscreen, so it’ll be immediately obvious in the viewfinder if the mic dips too low during a take. Others feel this compromises the sound.

For more information:
This is an excerpt from Producing Great Sound for Film and Video: Expert Tips from Preproduction to Final Mix, 4th Edition by Jay Rose © 2014 Taylor and Francis Group. All Rights Reserved.