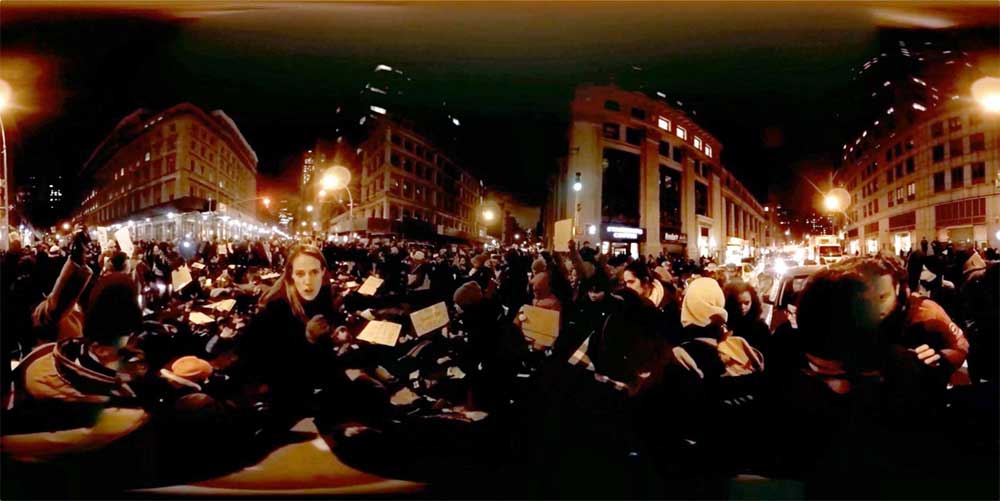 These experiences can be viewed through the company’s new VRSE app available on iTunes and Google Play. The first of its kind, it allows audiences to download a growing selection of curated VR content designed to be viewed in a full 360-degree 3D virtual space through the low-cost Google Cardboard set-up, or on most late-model smartphones in non-VR mode. The app will ultimately work with other VR headsets, including Facebook’s Oculus Rift.

“This is a totally new medium. There’s no language for the storytelling yet at all, but everything’s so accelerated right now. It’s not like the beginning of cinema when it took decades to figure out feature film,” says Director Chris Milk who’s been experimenting with storytelling in the VR space for a few years.

“I think we’re at the place now where consumers are definitely ready for this kind of storytelling,” said Patrick Milling-Smith. “Up until this point, it’s been all about the technologists. What we’re trying to do is bring real artists and filmmakers and a sense of story and marry that with the technology.”

To help forge the new medium, VRSE Works has assembled a list of top directors, tech-focused storytellers and producers.

“I wanted to create a think tank of similarly-minded people who are great at storytelling in the existing formats, whether it be music videos, commercial, shorts or immersive theater, and bring them together under one roof and explore collectively what we can make in this medium,” says Chris.

The company will work with agencies and direct-to-client on branded projects. In the works is “Catatonic,” which straps the audience into a wheelchair and throws them into a trippy insane asylum horror experience, and “Stone Milker,” a collaboration with Bjork set to launch as part of the musician’s 2015 retrospective at the Museum of Modern Art.