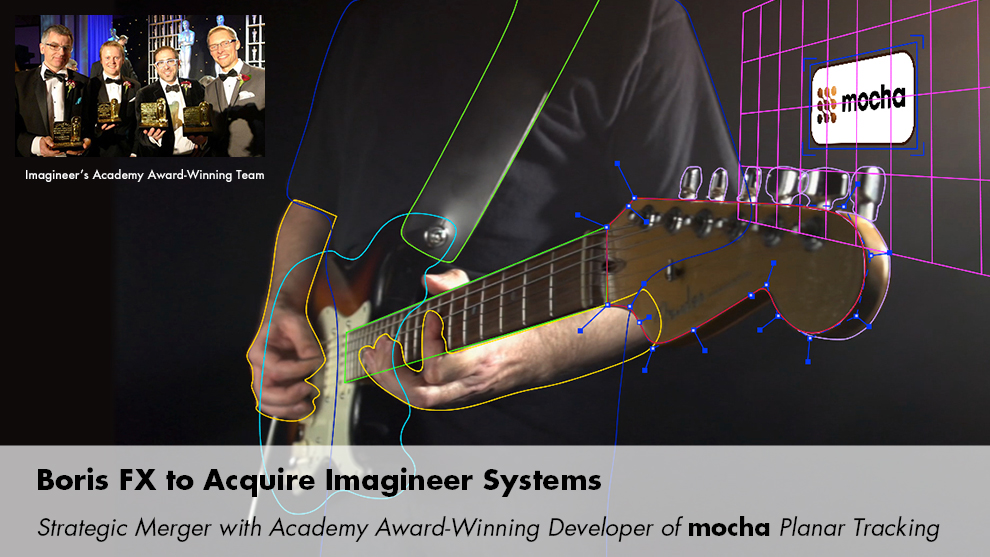 Boris FX, the expert in integrated VFX and workflow solutions for video and film, has signed a definitive agreement to acquire Imagineer Systems Ltd., the UK-based developer of the exclusive Planar Tracking™ and masking tools. Imagineer’s flagship product, mocha Pro™ plays a leading role in countless major Hollywood films. In 2013 the team behind mocha was honored by the Academy of Motion Pictures with a Science and Engineering Award. mocha Pro software was recently used on blockbuster films “Gone Girl,” “Birdman” and “Hunger Games: Mockingjay Part 1,” and TV show hits such as “The Leftovers,” “Game of Thrones” and “House of Cards.”

“This strategic acquisition will allow us to offer the most comprehensive and advanced set of visual effects tools and solutions on the market today, serving everyone from the independent filmmaker to the professional video editor working with effects to the feature film VFX artist,” explains Boris Yamnitsky, founder and CEO, Boris FX. “Imagineer Systems has the best-of-breed motion tracking, masking and rig removal technology. The company’s engineering and product design expertise perfectly complement Boris FX’s own highly regarded team of visual effects software developers and industry specialists. Both Boris Continuum Complete and mocha Pro will greatly benefit from combining our resources and technologies, as will the many mutual customers we serve.” The newly merged company will build upon the strengths of both development teams to become the leading software firm specializing in post-production plug-ins and tools for editorial, visual effects and motion graphics design.

Imagineer management echoes the play on strengths and the value the merger will bring to the industry. “From our first discussions with Boris it was clear we share the same ethos of directly engaging with our users and the same passion for innovation in visual effects,” states John Paul Smith, CEO, Imagineer. “One of Imagineer’s key strengths is the ability to play well with others, supporting every popular VFX application in the industry. Joining the Boris family is a huge opportunity to bring mocha’s world-class planar tracking to Boris Continuum Complete users, giving artists and editors the tools they need where they need them most.”

The announcement of the acquisition has already been greeted with excitement from the industry. Jake Morrison, VFX supervisor with Marvel Films (and a member of the Academy of Motion Pictures) expressed, “Imagineer makes amazing tools for the visual effects community. At the core, its planar tracker is truly one of the most significant technologies for a VFX professional – something recognized by the Academy when the company recently received a Sci-Tech Award.”

Morrison continues, “As both a VFX artist and a production-side VFX supervisor, I’ve benefitted immensely from its technology and have been an advocate for many years. Fundamentally, mocha’s toolset enables the user to focus on the creative rather than the technical, allowing them to complete tasks like tracking and rotoscoping in a fraction of the time. Imagineer’s strategic partnership with Boris FX is great news; bringing new features and new users to mocha Pro is a win-win for the VFX community at large!”

Considered the standard visual effects toolset among broadcast and post facilities, Boris FX has more than one million registered customers, which include Viacom, ABC/Disney, BBC, ESPN and more. Boris FX tools were instrumental in contributing to television content such as “Downton Abbey,” “Weeds,” “Annoying Orange” and many others. Boris FX customers have also reacted eagerly to the news of the merger. “At ESPN, BCC plug-ins are part of my everyday Avid workflow. The interface, flexibility and quality are paramount for me to create the highest quality content for productions like Major League Baseball. Additionally, when tracking is part of my design process, mocha Pro is my hands-down go-to tool. The ease of use and amazing results I can get with mocha open up design opportunities I don’t get with other tracking tools,” states Doug Fitzsimmons, coordinating editor and project leader at ESPN. Fitzsimmons continues, “To learn that Imagineer and Boris developers are joining forces is really exciting. I am really looking forward to seeing what innovations this Imagineer/Boris team of designers develop, and getting more advanced tracking tools in my Avid timeline.”

“I’ve worked with Continuum Complete for many years and am continually impressed with the sheer power and large library of useful tools for post,” says Ross Shain, chief marketing officer of Imagineer Systems. “Imagineer is very excited to be teaming up with one of the leading plug-in developers in the industry, and we will leverage Boris FX’s experience with GPU-enhanced acceleration and host integration to improve the mocha family of products.”

Shain continues, “Our companies share a common vision: to provide editors and artists with dedicated problem-solving tools that speed up workflows and help users focus on creativity. Combining technical and marketing resources will allow Imagineer to better support our existing customers and help expose the power of mocha to new users in the editorial and broadcast markets. Combined, Boris FX and Imagineer will be supporting almost every professional editing and effects software in the marketplace.”

Imagineer Systems Ltd. will continue to operate as a wholly owned UK subsidiary of Boris FX with CEO John-Paul Smith continuing to lead from the Guildford, UK location. Boris Yamnitsky, CEO of Boris FX, will serve as the group chairman and Ross Shain will become the chief marketing officer of both Boris FX and Imagineer. For more information about the acquisition plans, please visit our FAQ.