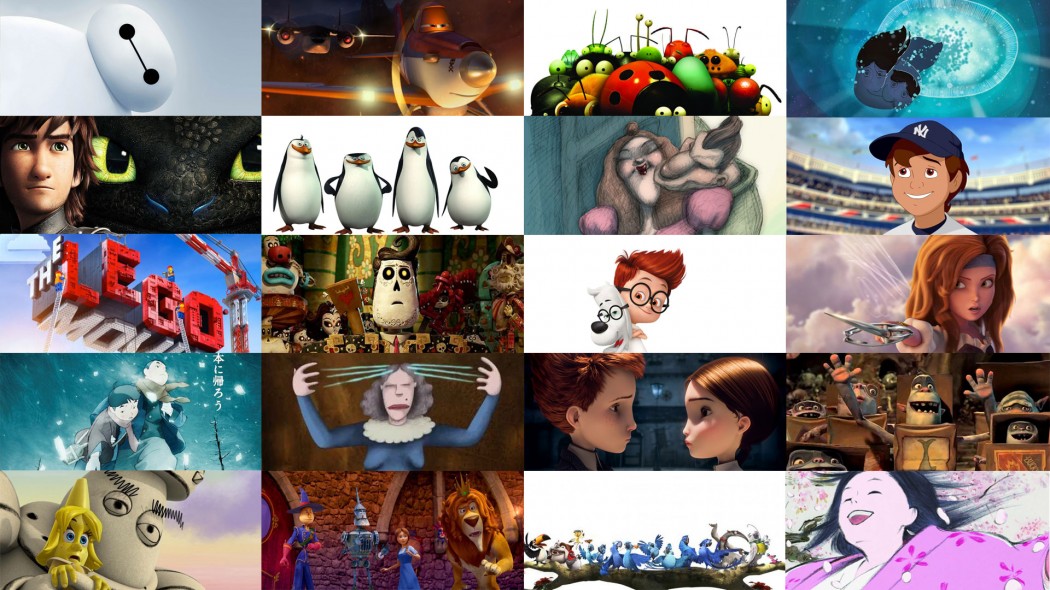 Twenty features have been submitted for consideration in the Animated Feature Film category for the 87th Academy Awards®.

The submitted features, listed in alphabetical order, are:

“Big Hero 6”
“The Book of Life”
“The Boxtrolls”
“Cheatin’”
“Giovanni’s Island”
“Henry & Me”
“The Hero of Color City”
“How to Train Your Dragon 2”
“Jack and the Cuckoo-Clock Heart”
“Legends of Oz: Dorothy’s Return”
“The Lego Movie”
“Minuscule – Valley of the Lost Ants”
“Mr. Peabody & Sherman”
“Penguins of Madagascar”
“The Pirate Fairy”
“Planes: Fire & Rescue”
“Rio 2”
“Rocks in My Pockets”
“Song of the Sea”
“The Tale of the Princess Kaguya”

Several of the films have not yet had their required Los Angeles qualifying run. Submitted features must fulfill the theatrical release requirements and comply with all of the category’s other qualifying rules before they can advance in the voting process.  At least eight eligible animated features must be theatrically released in Los Angeles County within the calendar year for this category to be activated.

Films submitted in the Animated Feature Film category also may qualify for Academy Awards in other categories, including Best Picture, provided they meet the requirements for those categories.

The 87th Academy Awards nominations will be announced live on Thursday, January 15, 2015, at 5:30 a.m. PT in the Academy’s Samuel Goldwyn Theater.

ABOUT THE ACADEMY
The Academy of Motion Picture Arts and Sciences is the world’s preeminent movie-related organization, with a membership of more than 6,000 of the most accomplished men and women working in cinema. In addition to the annual Academy Awards—in which the members vote to select the nominees and winners — the Academy presents a diverse year-round slate of public programs, exhibitions and events; acts as a neutral advocate in the advancement of motion picture technology; and, through its Margaret Herrick Library and Academy Film Archive, collects, preserves, restores and provides access to movies and items related to their history. Through these and other activities the Academy serves students, historians, the entertainment industry and people everywhere who love movies. www.oscars.org