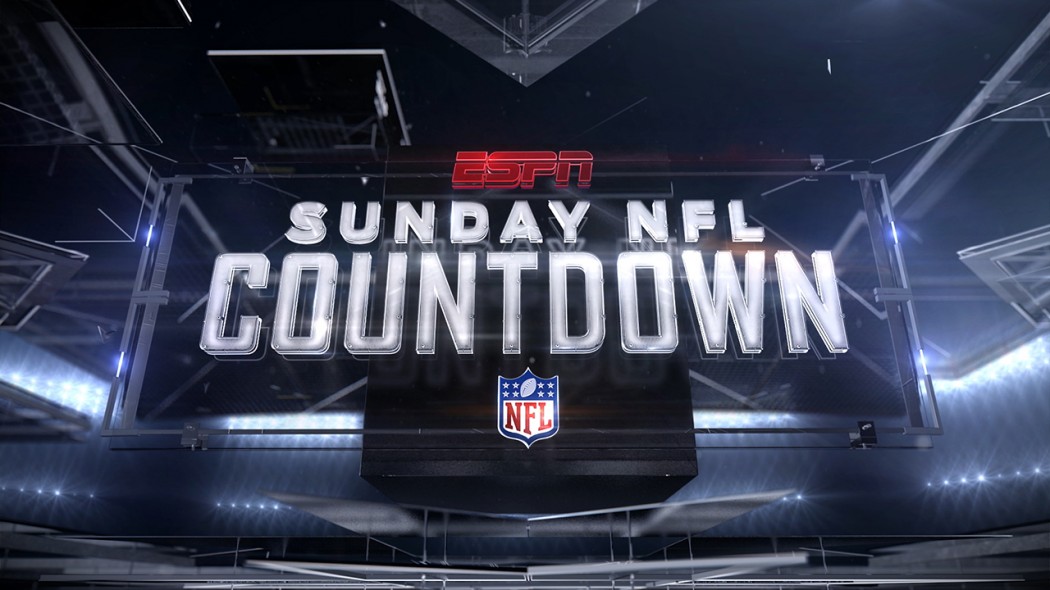 An epic project with over 1,000 deliverables, this new package of NFL graphics, show opens and team logos, teasers and interstitials will display BBDG-created content to inform and entertain fans across all screens for ESPN’s weekly NFL shows. In a close collaboration, BBDG and ESPN’s in-house creative team developed a heroic new look for Sunday NFL Countdown, ESPN’s flagship show, and extended that visual language for NFL Insiders, NFL Live, NFL PrimeTime, NFL Matchup and Week in Review. The rebrand debuted with the opening of the 2014 NFL Season.

BBDG creative directors Shaun Collings and Curtis Doss made the initial pitch to ESPN senior creative director Chris Mantzaris and ESPN vice president of creative services Rick Paiva in April 2013. Stemming from ESPN’s desire to set a precedent for all sports network branding with a highly sophisticated, premium channel identity, the BBDG team, led by executive producer Pete King, and ESPN’s Mantzaris, who was highly involved in the creative process, explored a noir, cinematic look inspired by superhero films. While the previous concept, which had been in place for the last six years, was gritty and tough, the new approach would be sleek and futuristic, featuring 3D glass panels with the freedom to fly around a dramatic layered environment. The minimized color palette is punctuated by bursts of glowing neon.

The newly designed packages will fill the multiple screens that are impressively arrayed in ESPN’s 9,000 square foot NFL studio, the most advanced set that ESPN has ever built. The borderless screens are mounted on fluid track systems with endless configurations, able to present content like game footage and stats in vertical or panoramic formats, even stacking screens for a single monumental display. In transforming traditional broadcast formats for new digital screens, the combined ESPN and BBDG designers have created a visually arresting and ever-changing sports gallery.

Because ESPN’s branding packages have such a long life, BBDG future-proofed the new look by establishing a visual language and style guide. They also produced numerous next-gen elements that will be banked in order to give ESPN’s design group the freedom to customize the look over time. ESPN’s Monday Night Football was outside the scope of the NFL rebrand; BBDG is currently in the design phase for MNF with ESPN, intending to drive an evolutionary new look for the 2015 MNF franchise.

Mantzaris said, “For over a year and a half, the Big Block Design Group orchestrated a full design vocabulary that became the language for an entirely new rebrand for ESPN’s 2014 NFL broadcast. Their passion, dedication and willingness to explore and test conceits were stunningly evident at the NFL season opening. In the tradition of the 12th Man, the collaborative effort by ESPN’s team and the entire group at BBDG sets ESPN apart from other networks with an exceptionally premium quality identity.”

Solomon said, “The ESPN NFL rebranding is the biggest project that BBDG has undertaken to date. I am so proud of our group and the beautiful, strategic work they have produced. To be able to work together with Chris and Rick as true creative partners over the past 18 months on one of the world’s most valuable brands has been a dream come true for all of us.”

A key component of Big Block’s culture is Big Block Design Group (BBDG), whose creative leadership infuses design sensibility and brand strategy throughout the totality of the studio’s productions from inception through live action and production.

In New York, Big Block Live extends the studio’s mandate with an emphasis on live action and branded content, while Big Block Entertainment Group focuses on the development and production of live theater, feature films and television.

Big Block was launched by business developer Scott Benson and executive producer Kenny Solomon, whose collective experience with the production of branded content makes them uniquely suited to meet the challenges of creative communication.

Big Block is housed in the Art Deco Ilona Building on Wilshire Blvd. in Santa Monica and at 501 Fashion Avenue in New York.