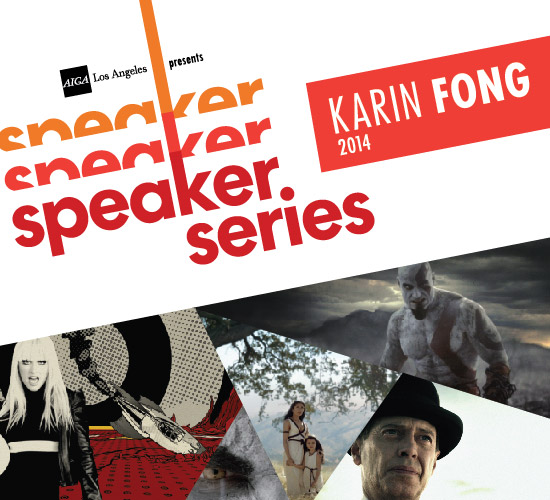 AIGA LA is proud to present Emmy-Award winning designer Karin Fong as part of their 2014 Speaker Series. Join Karin as she shares her vast design experience in television, advertising and cinema with the LA design community – from founding member of powerhouse creative studio Imaginary Forces to overseeing the creative vision at Wonderland Sound & Vision.

Karin Fong is an Emmy-award winning director and designer. Known for her work in television, advertising, and cinema, Karin brings her brand of visual storytelling to everything she creates. Among her projects are the iconic opening titles of Boardwalk Empire, South Park, and Black Sails, as well as the main titles of numerous feature films. Her directing credits include commercials for major brands, including Target, Lexus, Sony PlayStation and Herman Miller. From cinematics for Sony’s God of War video game series to large-scale video installations in Times Square, Karin’s projects showcase her inventive mix of design and filmmaking expertise.

She currently oversees the creative vision at Wonderland Sound & Vision the film and television production company founded by McG (Charlie’s Angels, The O.C.). Prior to Wonderland, Karin was a founding member of Imaginary Forces, where she honed her skills at the intersection of live-action, design, and animation.